Why does MSP430 have 2 capture signals for each capture/compare channel? Pin assignments recommendations?

One could think that those TA signals identical and multiplexed twice as a courtesy to folks doing PCB routing, but looking up pins in "Terminal Functions" table, it becomes clear that they are different:

So, when that capture/compare channel is used in compare mode, they are indeed identical. But for capture mode, they represent 2 different signals to start a capture, which one to use is selected in the control register. So the question is: Why so magic? Can someone decipher a usecase TI engineers had in mind while designing it? Don't get me wrong, it's cool to have twice more capture inputs, but if they're so nice, why don't put twice more real independent C/C channels?

Following up with the questions, suppose I have 6 P2 pins which have such C/C altfuncs (i.e. 3 channels, and 2 capture signals for each channel), and I need to use 3 of them for GPIO - what would be more flexible (future-proof, extensible) arrangement of pins? My obvious guess is that I should leave 3 independent C/C channels, and use "extra capture signal" pins for GPIO, but again, maybe I'm missing something? 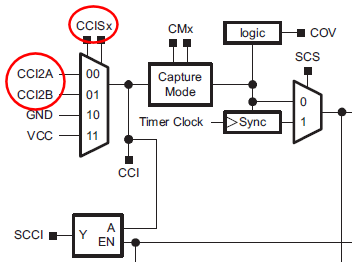 It would appear this was their purpose in the link below. I feel like capacitive sensing is a defining application for this range of microcontroller from TI's perspective. More than anything they didn't see a user need for so many compare modules, but depending on the capacitive touch resolution you want, you may be interested in as many capture modules as possible.

Not the answer you're looking for? Browse other questions tagged msp430 timer gpio or ask your own question.

6
Why would an input pin have both a pull-up and pull-down resistor?
1
Using DTC and for repeated Single Channel Reading on MSP430
0
Does MSP430 and AVR have internal pull-up on UART's RXD line?
0
Why does a GPIO pin always return logic low when devices are connected to it?
6
Detecting DMA overflow in arbitrary waveform generation
1
Why does the UART not report an error for a data byte with wrong parity?
3
Why should I use a pull up/down resistor for a GPIO output pin?
6
Why would you enable pullup for a GPIO pin in push-pull mode?
0
How to use analog mode GPIO pin(not ADC input channel) for ADC?