How does an iPhone car adapter work?

I know that the car cigarette adapter provides 12 V and around 10 A, while USB is ~6 V and x mA (I'm assuming it draws a small amount of current). How then does a car USB adapter work to recharge an iPhone? Some are so small, it's hard to imagine that there is a transformer inside there.

USB is 5 V. A difference of 7 V at for instance 1 A would cause a power dissipation of 7 W if a common linear regulator would be used, which would melt the device, so they use a switching regulator, aka SMPS (Switch Mode Power Supply), aka "switcher". There's no transformer, since you don't need isolation, but there's an inductor.

A linear regulator acts as a variable series resistor, whose resistance is regulated so that the output voltage remains constant. But that means that all the current which is consumed by the load also goes through the regulator, and that's why it's so inefficient, especially when the difference input-output voltage becomes large.

A switcher will use input current to build up a magnetic field, and then use that magnetic field to create the output current. The name switcher refers to the high frequency at which this occurs. So it pumps a small amount of energy in the coil, which releases it again, again energy in the coil, etc. The control circuit will vary the duty cycle of the switching to keep the output voltage constant.

Since there's no series resistor a switcher can be made much more efficient than a series regulator. Depending on parameters like input and output voltage efficiencies of more than 90 % are possible, that means that 1 A out at 5 V will only cause 500 mW dissipation. (Remember, the linear regulator was 7 W.)

Most of those adapters will use an MC34063 switcher, mainly because it's dirt cheap, although it doesn't perform as well as more recent switchers.

They use switching regulators. Here is a picture of a generic car charger from ifixit: 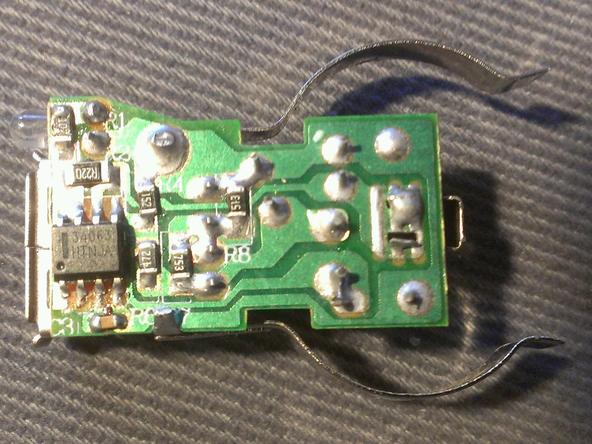 It uses an MC34063 Switching regulator in Buck (Step-Down) mode. It only requires a few resistors, a pair of capacitors, and an inductor.

Apple of course is all about small and sexy. While they do not produce a car charger, they do make (or source) home chargers. So even when they use transformers as in their flyback switching wall wart supply, everything is made very small and carefully engineered to tetris together into the smallest possible form factor (while maintaining clear safety standards, unlike cheap clones and knockoffs). 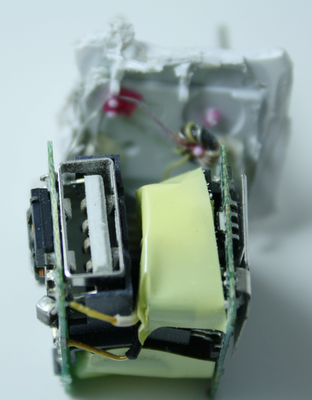 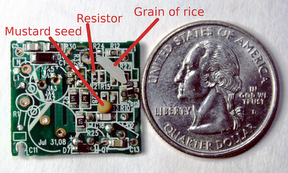 They're all SWITCHED-MODE POWER SUPPLY.

A switched-mode power supply (switching-mode power supply, SMPS, or switcher) is an electronic power supply that incorporates a switching regulator to convert electrical power efficiently. Like other power supplies, an SMPS transfers power from a source, like mains power, to a load, such as a personal computer, while converting voltage and current characteristics. An SMPS is usually employed to efficiently provide a regulated output voltage, typically at a level different from the input voltage.

Unlike a linear power supply, the pass transistor of a switching-mode supply continually switches between low-dissipation, full-on and full-off states, and spends very little time in the high dissipation transitions (which minimizes wasted energy). Ideally, a switched-mode power supply dissipates no power. Voltage regulation is achieved by varying the ratio of on-to-off time. In contrast, a linear power supply regulates the output voltage by continually dissipating power in the pass transistor. This higher power conversion efficiency is an important advantage of a switched-mode power supply.

Switched-mode power supplies may also be substantially smaller and lighter than a linear supply due to the smaller transformer size and weight. Switching regulators are used as replacements for the linear regulators when higher efficiency, smaller size or lighter weight are required. They are, however, more complicated; their switching currents can cause electrical noise problems if not carefully suppressed, and simple designs may have a poor power factor.

Not the answer you're looking for? Browse other questions tagged usb battery-charging automotive or ask your own question.