MOSFET does not turn off totally

If your MOSFET (or other chip) does not behave well AND you bought from not-really-known seller (even if his/her positive feedback ratio is over 99%) for a very competitive price, MAYBE you got a "factory FAKE" item (means: intentionally produced as FAKE in factory).

This realization took about 3-4 nights to me, because I just started using MOSFETs.... very VERY VERY big eye opening experience.

I checked "MOSFET does not turn off", or even "does not turn of totally" related topics. There the solution was usually or other (parasitic way of power), or MOSFET driving problem.

I thought I understand MOSFET (voltage driven and which voltage counts), however I faced the same problem with 2 different simple circuits, so likely I missed something regarding MOSFET basics.

What I wanted to achieve: driving a 12V LED strip (draws about 2A).

1st I used P channel MOSFET - as switch. It was working, BUT very often the LED strip lightly dimmed and vibrated (MOSFET ON was OK, OFF was not perfect). I read somewhere P channel MOSFET gate needs little higher voltage than source to surely turn off..

In both circuits I created them in simulator (drawings came from there), so V1 (dataIN pin) is coming from a 3.3V microcontroller (which I realized only in 2nd circuit). 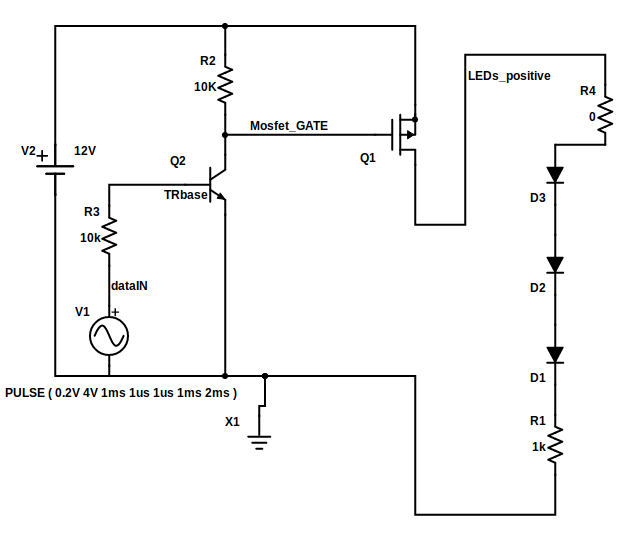 So I discarded that circuit and made a simpler one with N channel MOSFET: (after taking apart, I checked the P channel MOSFET and .... just now I saw a Youtube video regarding real and false MOSFETs: Youtube regarding REAL and FALSE MOSFETs ) 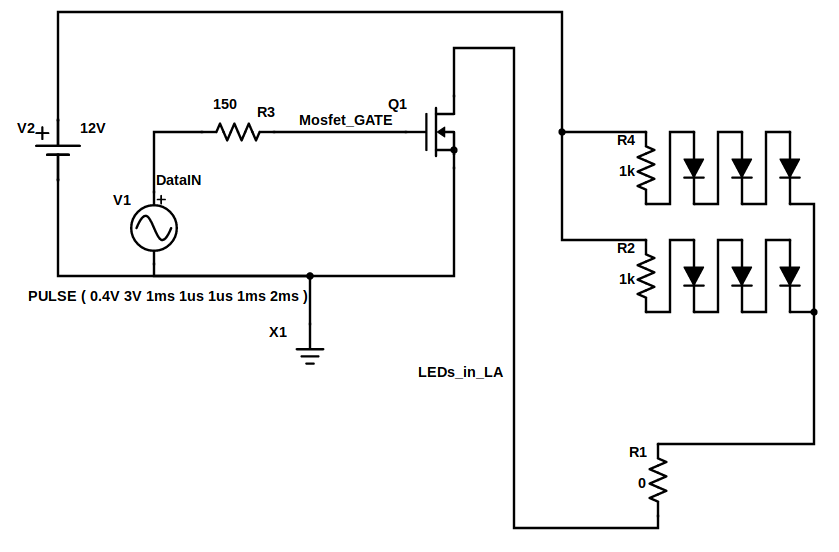 BUT This 2nd circuit does exactly the same. I moved the pin to a PWM capable pin, so now I can dim the LED strip nicely, I can switch on the LED strip as well, but when I switch it off it "starts" to dim very lightly and "blinks" randomly. Again, I can make steady 5%-100% LED power and works nicely, but with 0-1% (I am interested in 0%) it does not switch off firmly.

I have to admit, that my power source is far from perfect, 2A drain in 12V made it 11,5V, but obviously does not make few volts spikes etc.

Very rarely I achieved the "total off" state (without modifying everything), but within few mins - few hours I got back the low light & blinking LED strip. I was thinking to make some capacitor to eliminate any ripple (if any).

The dataIN is about 50 cm wire, LED strip is 2-2,5 meters, wire to LED strip is about 1 meter. Again, I shorted (in 2nd circuit during logical low dataIN) gate and source - without reaching the desired TOTAL OFF.

I know both has a diode between source and drain (connected as reverse bias), but as I heard it is a byproduct of the MOSFET production and should not make any trouble here.

If anybody could help me:

I bought some N channel MOSFETs (IRLZ44N) - which has logic level gate drive from a reputable local store (for about 0,36EUR / 0,43 USD per piece). According to datasheet, for 3V gate voltage and 3A drain-source current the resistance goes below 0,1 Ohm...

I changed the N channel MOSFET (and only that) - and VOILA everything works like charm! As I already connected to PWM signal, at even 1% PWM LEDs are nicely (but barely) dim.

I also bought P channel MOSFETs (IRF9Z34N) and I am quite sure my other circuit would also work with a real MOSFET.

Most likely your LED-s are catching some noise, might be from the DC-DC converter or the WIFI router or even from the power source itself.

The drain source diode makes a half bridge rectifier for the noise leading to a small current going through the led strip.

Place a 1Kohm resistor in parallel with the LED strip and the flickering will go away.

LED array still not totally off with the FET gate open or short to source. I replaced the FET with transistor with base limiting resistor solved the issue.

2
gate current direction during turn-ON of P-channel mosfet
1
MOSFET IRF7832 to turn on LED strip
0
mosfet turn off / turn on
1
Mosfet does not turn off
1
Mosfet: gate voltage 0 but still led strip on
0
Using one Mosfet to control the gate pin of another Mosfet
2
N-channel MOSFET back to back do not turn off