If I use n-channel MOSFET (IRF3205) for high side switch, I need a gate driver for that MOSFET to turn on. For high switch the mosfets gate require higher voltage than it vcc. I have to switch 50 positive supplies, so I have to give more than 50 V for the gate to turn it on. http://www.irf.com/product-info/datasheets/data/irf3205.pdf

But in datasheet Vgs= ± 20, what that vgs exactly means.

It's easier to understand with a drawing: 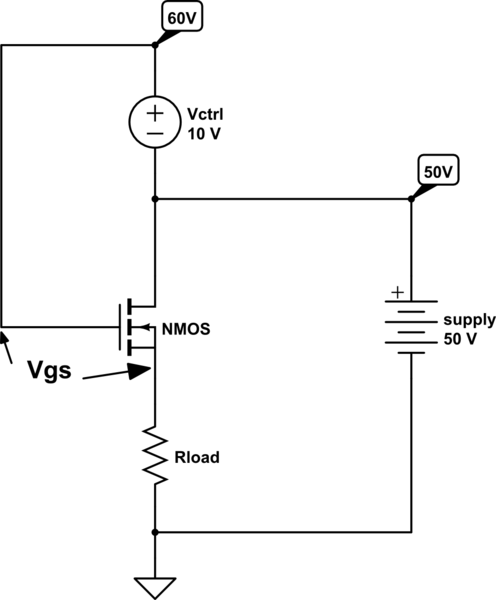 The way you propose to use the NMOS as a high side switch is correct, you have to take the gate voltage above the supply voltage.

But watch out! If you now want to switch the NMOS off you might have a problem. Let's say you make Vctrl = 0 V then the gate will be at 50 V. That will not turn off the NMOS will as the voltage at the source will drop until it opens the so much that the NMOS will still conduct somewhat. It will work as a source follower. Avoid that ! What needs to be done is to make the Vgs of the NMOS itself equal to zero.

In order to do that you need to take the Gate all the way down to 0 Volt so ground. That means 0 Volt referenced to ground, just making Vgs = 0 is not enough as explained above. For this we would need to make Vctrl = -50 V !

That i have to switch 50 positive supply, so i have to give more than 50v for the gate to turn it on.

The absolute value of gate voltage is irrelevant - it is the difference in voltage between gate and source that will cause a MOSFET problems. With a high side N channel MOSFET with 50 volts on the drain and (say) 60 volts on the gate, the source will be pretty hard-connected to the drain and it will be at 50 volts (minus a small volt drop due to Rds(on).

But you have to be careful; when you activate the gate from a 0 volt level to 60 volts, you have to do so in such a way so as not to leave the "source" voltage behind should it be connected to a high capacitance load. In other words you MUST place a 15 volt (for instance) zener diode between gate and source to clamp the gate drive voltage to no-more than 15 volts. You also have to consider the scenario when turning off the MOSFET - capacitance at the source could keep the source at a high voltage (50 volts) and if you whip the gate down to 0 volts then you get more than -20 volts between gate and source.

So back to back zener diodes are needed OR use a proper gate driver IC.

Not the answer you're looking for? Browse other questions tagged mosfet high-side or ask your own question.

1
IRS2110 IC & high side floating supply voltage - H bridge
1
Why is this a bad MOSFET/Driver for a Tesla Coil, what does one look for in a good one?
2
Gate Driver IC question?
0
irf3205, did i kill it?
0
Using a IR2125 to drive a MOSFET gate
3
MOSFET's drain and source short out in high side driver circuit
1
Why do my mosfets keep breaking/ dont work?
6
Saturation Points for Mosfets; driving gate with 3.3V output
1
Understanding Vgs absolute value
1
Can I drive a high-side N-channel MOSFET with NPN transistor and extra battery? (H-bridge)