Why does putting resistors between Vcc/SDA & Vcc/SCL in I2C result in a square wave?

I'm trying to understand why placing resistors between Vcc and the data/clock lines helps my waveform be square, when I'm communicating between Arduino and an EEPROM chip. If resistors are not placed in the circuit, the waves look like shark fins. The circuit still functions, but they're definitely odd-looking waves.

For background, this question arose after wiring up an Arduino to a Microchip 24LC256 (EEPROM) using I2C. Upon inspecting the signals with my oscilloscope (trying to debug something unrelated) I noticed the waves looked, well, horrible. They looked like shark fins to me (is there a more accepted EE phrase for this?). I checked several times to make sure my probe scopes were tuned/compensated correctly, and verified I didn't get such behavior on other circuits. This is what the wiring looked like: 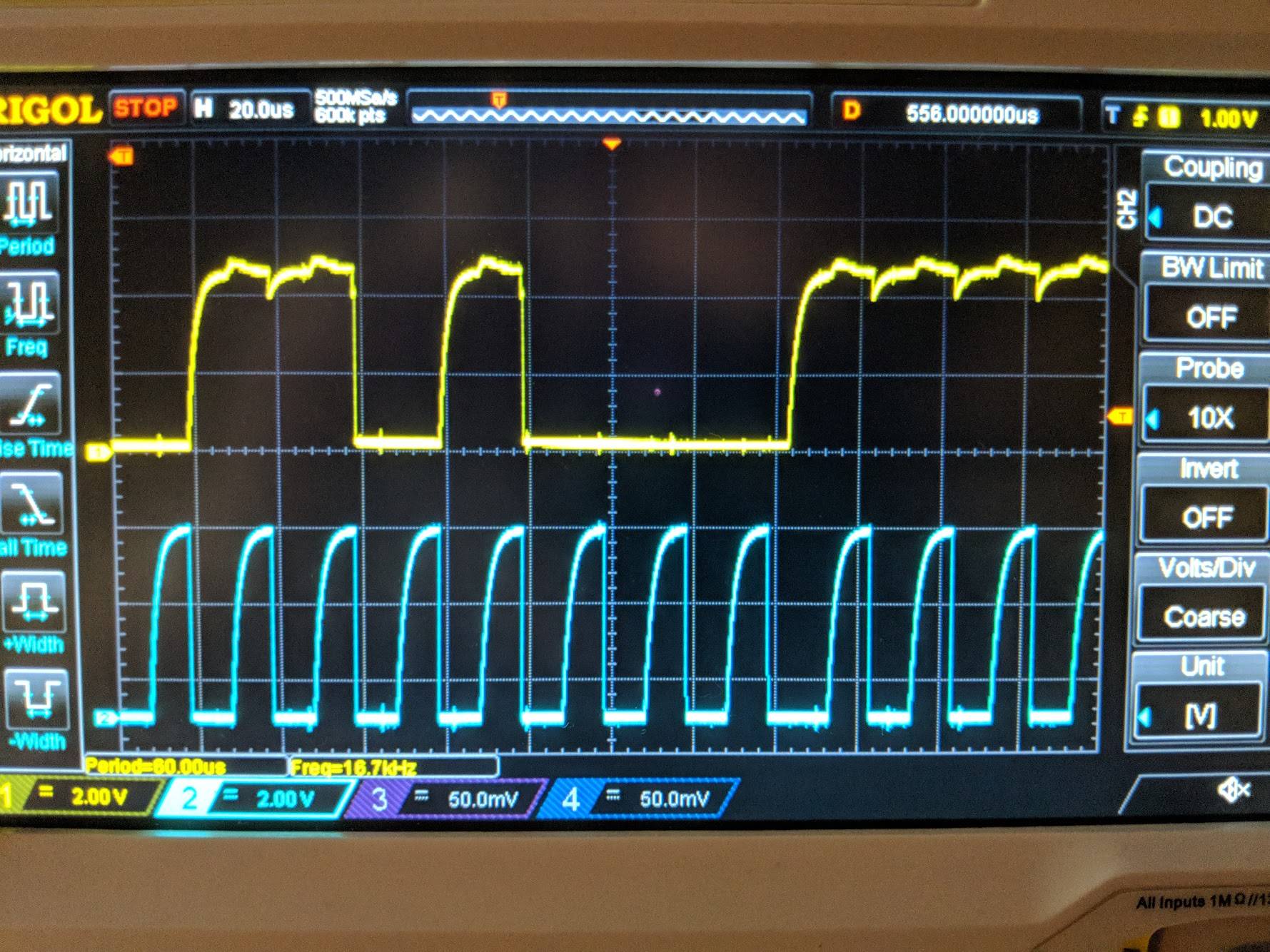 Unfortunately I never got a chance to ask why! I'm a noob to electronics but I'm very curious why a resistor placed like this causes them to be better looking square waves? This photo below is after using resistors, but before picking the 'optimal' resistor values for the best looking square waves. I think it looks much better. 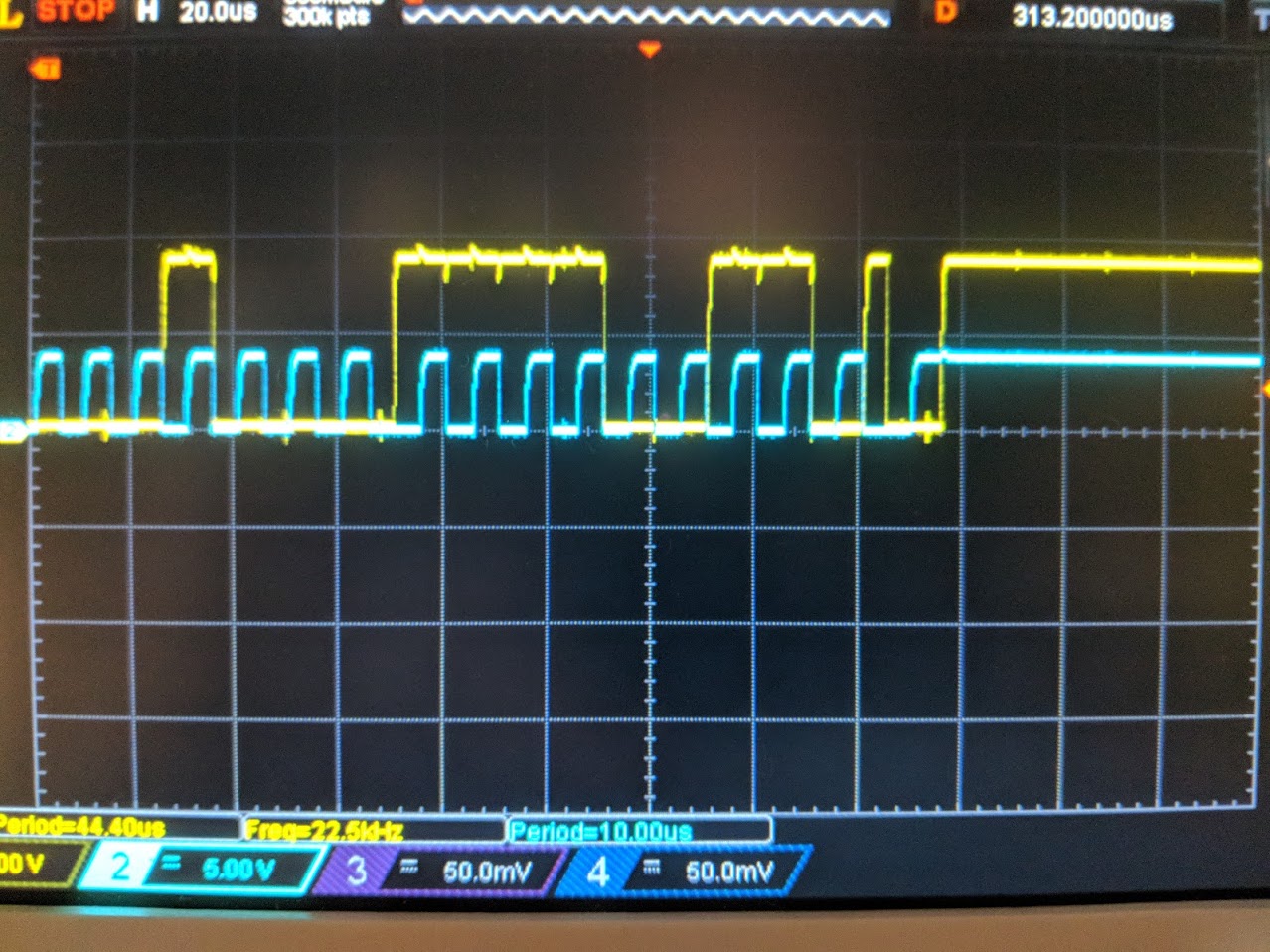 I looked for explanations on Stack Exchange but to no avail. These seemed (potentially) similar to my issue: Problem with I2C EEPROM communication (his waves look similar to what mine looked like, but the answer didn't address my question) I2C interfacing between two chips (this one also seemed fairly promising but didn't dig into the "why") Strange I2C signals emitted from FPGA (this seemed related to something else... though similar in that her waves look "ugly")

I2C is a bus that uses open drain outputs. An open drain is like a switch connected between the output and ground. It will not work without pullup resistors because there is nothing to make it go high.

If the pullup resistors are too high in value it won't work (or won't work reliably) because the resistor won't charge the capacitance of the inputs, the output, the wire and maybe a scope probe fast enough. If they are too low then the output won't be strong enough to pull it down.

You notice that on your scope measurement the outputs go low very quickly but are sluggish to rise to logic level 1.

If the code on your Arduino is using the internal pullup resistors on the ATMega to bit-bang an I2C interface then they are probably too high in value (tens of K ohms, and not well-specified) to work reliably, so they need to be paralleled with external resistors.

Personally, I would have written the code to not use the internal pullups (by default) to avoid the situation of the bus "almost" not working, and force the user to use the resistors or deliberately choose to use the internal ones. It's possible they're acceptable if the chips are very close together, low speed (100K) is used and no scope probes (especially in x1) are attached.

I2C is not supposed to work at all without pull-up resistors; they are explicitly required in the design of the bus.

So in effect, your question is moot - do it wrong, and bad things happen.

If you really want to understand exactly what is happening it is likely that you are getting some kind of weak pull-up effect from a leakage current or possibly even an internal pullup resistor that is around 10 times larger than the I2C bus resistor should be. This causes that exponential RC rising waveform - the classic one of a capacitor charging through a resistor. With a proper value pull-up resistor it still happens, but quickly enough that the exponential looks vertical on the scope.

Whatever current source is bringing the line high in the absence of a true pull-up resistor, it is weak (ie, the circuit is very high-impedance) so it is also extreme susceptible to capacitive coupling from the clock line, hence you see the tops of the data line waveform showing artifacts when the clock switches.

Use the required pull-up resistors. Put a supply bypass capacitor across your chip. Keep wiring runs as short as possible. Follow the rules, and you avoid the problems that characteristically come from breaking them.

5
DS1307-breakout-board
23
Why I2C designed to work with pull-up resistors and not pull-down ones?
0
I2C / TWI freezing with SDA stuck at LOW
0
doubt when Arduino connects to multiple i2c devices
3
Decreasing I2C SDA SCL interference
1
SDA and SCL for I2C are always low
4
Why does the TCA8418E datasheet ask to connect all pins to Vcc using a pullup resistor?