Help in the closing of a logic circuit

I'm currently studying logic circuits for my exams and came across a question "7. An electrical circuit is set up with four switches. A lamp will light only if the following happens:

Draw a logic circuit to represent this. I made a AND gate for A and B, made an XOR gate for C and D but don't know how to close the circuit into one output as I now have two outputs. I hope you guys understand my situation and help with it, Thank you. If this is the wrong site please lead me to the correct site, please.

This is an English language problem. You've been given a specification in natural language, and are struggling to turn it into explicit logic.

Switches A and B are both on.

You've used an AND gate for this, correct, that clause is (a AND b), let's call this partial result e.

Either Switch C or Switch D is on, but not both.

You've used an XOR gate for this, correct, that clause is (c XOR d), let's call this partial result f.

So far, you've reduced the whole expression to ...

A lamp will light only if the following happens: e ? f

This is why engineers get themselves into trouble, accepting a job with a specification written in English, and then realising they don't actually know what it's asking until they come to implement it. 'Only if' sounds a bit logiccy doesn't it.

'Only if' is not used in logic. There is a term 'if and only if', usually expressed as IFF. However, IFF is a biconditional, it's designed to express a truth about a system, rather than as a formula for getting a result from inputs. For instance 'I have a brother IFF my sibling is male'. (Something) IFF (conditional).

As you're trying to make a logic formula work, it clearly doesn't mean IFF, but IF. So we have ...

The IF still hasn't clarified whether that ? should be AND or OR, or even something else. English is not precise enough. It could mean either of those.

Let's put the 'only' back in again, to see if it helps to qualify whether it's AND or OR.

A lamp will light ONLY if BOTH the following happens: e ? f

A lamp will light ONLY if EITHER the following happens: e ? f

As a native English speaker, the first one sounds reasonable, if unusual, but the second one sounds really odd. If English wasn't my first language, then I may not come to that conclusion.

This may be a question designed to test whether you can spot ambiguities like this, and say that the question is underdetermined.

However, if I was taking an examination, and believed that there 'was only one correct answer', then I'd plump for AND, that's my best reading of the English.

If I was implementing a product from a customer's specification, I would go back to them and ask them if that's what they really meant.

As Neil_UK showed in his answer, it can be a bit open for interpretation. He has covered pretty much everything, so I can only help further by allowing you to see it visually.

A lamp will light only if the following happens:

First let us look at the first condition:

Now let us look at the second condition: 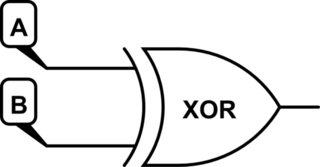 Great. We now have a circuit with 4 switches. But as you said, you now have 2 outputs. These can now be named E and F: 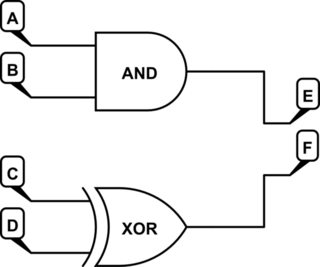 From here, it can get a bit open to interpretation, but you now have 2 choices. Did the question mean when both of these conditions exist? Meaning that A AND B, and C XOR D is the condition? Or did it mean A AND B, or C XOR D?

Let us look at your 2 possible circuits: 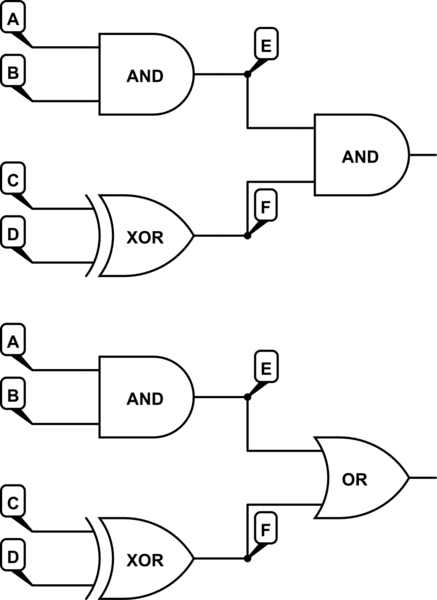 Now, looking at the wording:

A lamp will light only if the following happens:

To me, that sounds like it means the AND circuit is the one you want.

What @Neil_UK says is completely correct that the question is a little vague, but is seems to me that the lamp should light up if both the mentioned conditions are true. In that case take the output of the AND and OR gates that you already made, and put it through another AND gate. This final AND gate will then only activate if BOTH your conditions are met, and not just one.

For completeness, if you want the lamp to light up if either one of the conditions are met, then use a OR gate instead of AND for the final gate.

Thank you @Neil_UK, @Hein Wessels and @MCG, You all paved a proper road for me to take to get the answer, first of all, @Neil_UK helped me in reassuring that my first two gates (A AND B gate) and (C XOR D) and hinted that The last gate should be an (E AND F gate), @Hein Wessels reassured the last gate and @MCG displayed the logic circuits with two different possibilities and concluded a gate that I took to appreciation. I would like to thank all of you in taking your time and the extra mile in my question, this mainly is a text of appreciation but also the final answer.

Not the answer you're looking for? Browse other questions tagged logic-gates or ask your own question.

0
Constructing a medical model: logic gates with feedback?
0
Help me fix my logic circuit
0
how do i provide low and high inputs
2
Error Correcting Code Generator Circuit Implementation with XOR gates
3
Using logic gates instead of Arduino
1
How to build a sequential logic circuit with transistors on a breadboard
3
need logic gate output higher than vcc
0
Pull-down resistors on logic gate and decoder inputs?
0
Beginner - unable to use AND gate with buzzer and flashing light circuit
1
Having trouble with determining why my XNOR transistor circuit is not behaving