I'm trying to determine the capacitance of a sensor, but the oscilloscope's internal capacitance is loading the measurement too much.

What is an appropriate method to determine a low picofarad capacitance using an o'scope in this situation? (o'scope internal capacitance is 24pF).

You could use Bob Pease's high-Z probe. It's documented in his Troubleshooting Analog Circuits series of EDN articles ("The right equipment is essential for effective troubleshooting", published on page 159 in EDN january 19, 1989), and is illustrated in this page by ESP.
This is the test circuit in ideal condition - no loading at all. We will use it as a reference. 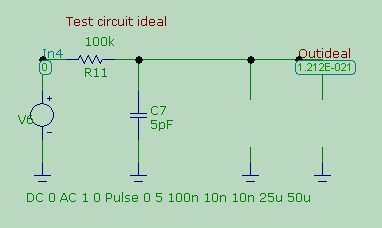 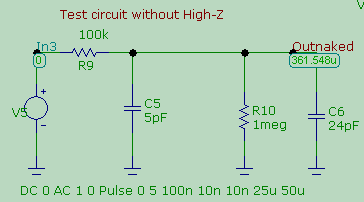 And this is what happens when you put Pease's high-Z probe in between the natzgul and its prey. I am not modeling the scope's probe, nor the simple cable required to attach it to scope (their presence would nevertheless be hidden by the humongous impedance of Pease's circuit) but what follows should make you want to build the circuit and see for yourself what the actual results will be.

Here are the simulation results: the dashed line is the signal of the generator (with a rise and fall time of 10ns), the purple line is the response of the test circuit when loaded by the scope (it's dominated by the 24pF of the scope's input). Red and green curves are, respectively, the response of the circuit with Pease's high-Z probe and the ideal response when the circuit is not loaded at all.

As you can see, the high-Z circuit makes the difference. Note that not only it 'shields' the circuit under test from the input capacitance of the scope, but it also makes the scope's input resistance almost irrelevant. The loaded circuit feels, along with the input capacitance, the voltage dividing effect of Rtest (here chosen to be 100k) and the input resistance of the scope (1meg), as it is evident from the fact that the voltage does not reach the maximum value of 5V.

In the EDN article, Pease states that the probe can be built to offer an input resistance of 100 Gigaohm in parallel with a capacitance of 0.29 pF.

Hmmm... this is tricky business.

Here's what comes to my mind:

Hopefully you know, how a 10:1 passive probe can show the waveform right regardless the input capacitance of the oscilloscope and the probe wire. Make your own same doing compensation circuit. Connect the signal source to the input of the scope through a resistor and your sensor connected in parallel. Find a resistor which placed in parallel with your sensor shows square wave perfectly.

Let that resistor be =Rx. The unknown capacitance of the sensor is Cx. Solve the following balance-equation:

Be sure there's no long wires making unknown extra capacitance in parallel with Cx or C2. You can add an extra resistor in parallel with the scope input to make a smaller Rx be enough. Otherwise you must have Rx=several megaohms.

Although this is an old question, to measure low capacitance with a CMOS Schmitt Oscillator is pretty easy using a calculator and measure frequency changes.

After calibration with 50 pF ( or RC of your choice )

, where 5 pF is the CMOS input and circuit capacitance kept to a minimum.