How can I see an output from SCL?

I am new to electronics, circuits, etc. Currently I am reading I2C and synchronous serial communications. As I understand, two devices must be connected to the same CLOCK wire so that the slave knows at which rate to interpret data because it might not have an internal clock. Now, I wanted to see how fast SCL pin on Arduino Uno oscillates by connecting a LED to it and GND and expected the LED to blink fast. Of course, as I believe, I attenuated the frequency to 1 by using Wire.h library and calling

as it is said here. The LED still didn't blink as I expected - once a second. What is wrong? How does SCL behave actually? Does it oscillate from 0V to 5V periodically or I must manually do this in the code?

The complete sketch was as follows

I built a circuit. The LED is turned on but it doesn't blink. I also tried changing the frequency in the code from 1 to different values up to 100000. 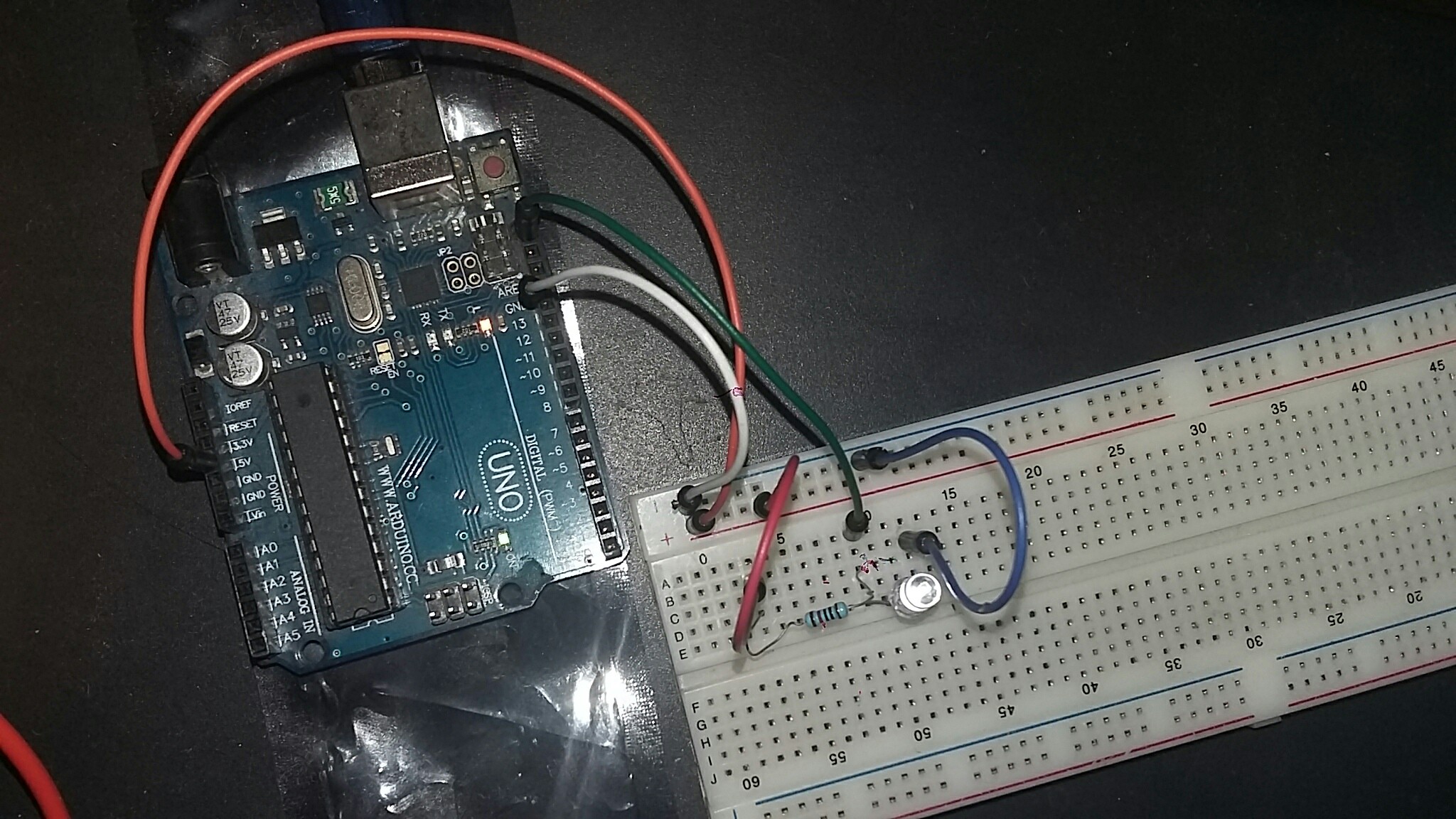 It blinks! But I am not sure is it actually SCL making it blink. I added Wire.begin() in setup() and started together with ending a transmission in the loop(). But it doesn't react to changes in setClock(frequency). Also I tried to put a delay or send long random text with Wire.write() between Wire.beginTransmission(0xA3) and Wire.endTransmission(). Then it just blinks once (maybe multiple times but fast) in the beginning and then stops blinking just being on. The complete code is

The minimum frequency your I2C clock is capable of running at (see end for details) is far higher than you will be able to see - your eyes physically cannot see it blinking at >30[kHz]. At most you'll see the LED being slightly dimmer than expected as data is being sent - might look like a single blink for the entire I2C packet.

Additionally if you have wired up your LED from the pin to GND, you will also see nothing as I2C is open-drain. That means it can only sink current. You would have to connect the LED with anode to +5V (via resistor), and cathode to the SCL pin. But again you wouldn't be able to see anything. I see it is not from your picture.

Furthermore, the I2C clock is not constantly running. The clock output is produced only when you send data. As your code never sends an I2C packet (the loop() function is empty), the I2C core will never generate a clock.

Once you start generating packets, you still wont see the clock blinking at its actual frequency. You might see it "blink", but the duration of the blink will actually contain multiple I2C packets. This is exactly the same as how you can make an LED dimmer by using PWM - you see the dip in brightness, but you cannot see the actual PWM frequency.

If you want to view the clock signal, you will require some form of logic analyser.

Due to hardware limitations, the ATMega328 cannot run the I2C clock rate at 1Hz (using hardware I2C). Regardless of what the API you are using allows you to enter.

The formula for calculating baud rate is:

Where the \$TWBR\$ register is an 8-bit value. \$Prescaler\$ is at most 64, but in the case of Arduino is set to 1 (can be gathered from the source code calculation being used). This gives:

The setClock API is shockingly written as it provides no form of error checking. In your case when you try to set a value of 1, this will try to write a value of 7999992 to the 8-bit \$TWBR\$ register, causing an overflow that will actually set the I2C rate to 30.418kHz.

You CANNOT drive the SCL at 1 Hz at normal MCU clock rates (16MHz).

Since the TWBR is an 8 bit register the divisor in the bit rate formula is limited (also limited by the prescaler).

Others have addressed the problem of slowing the I2C transmission speed set by the Arduino bus-master.
Using a LED in an attempt to watch fast digital signals is a poor substitute for an oscilloscope, but we must sometimes use inadequate tools. May I suggest a slight change to your test circuit, to improve chances of seeing something useful....

Our eyes see pulses of light in a dark background much better than we see pulses of darkness in a light background. Near as I can tell from your photo, the LED probe you have constructed is wired as follows. R1 keeps the LED lit, until SCL pulses pull down toward ground, creating momentary darkness:

The above circuit does work, but might work far better if SCL pulses actually lit up the LED - when no SCL pulses arrive (I2C bus is idle) the LED would then be dark.
The following circuit does exactly that, lighting up only when SCL pulses are active. Furthermore, it will be more likely that I2C devices attached to the bus will work properly:

simulate this circuit Note that there is no ground connection. The Arduino SCL pin actively pulls down to ground. Current flows from the +5V supply, through the LED, into the Arduino's SCL pin, and inside the chip finds its way to ground. When the I2C bus is idle, Arduino's SCL pin floats to logic high, and no current flows: the LED is dark.
You still may not actually see individual SCL pulses (your eyes blend together pulse rates faster than about twenty-per-second). But you'll have a somewhat better chance of seeing bus activity.

Not the answer you're looking for? Browse other questions tagged arduino i2c serial clock arduino-uno or ask your own question.

3
Since Arduino 1.0 string to upper case conversion does not work
0
Arduino Blink example does not run after upload from eclipse
6
How to control Arduino frequency?
3
Setting up an ATtiny45 as I2C master - SCL toggles low, but refuses to toggle high
1
PCA9685 (12-bit PWM I2C LED controller) and Arduino
3
Arduino: Only reads serial input when Serial Monitor is open. Fails when it's closed
0
problem of transmitting data from serial device to bluetooth on Arduino
0
Can SDA go low by changing SCL from high to low
0
Playing around with I2C does not yield expected results for SSD1306-OLED
0
CR2032 batteries with Arduino