Received signal level was recorded every 30 seconds for a short duration (30 min) and sometimes no signal could be detected for a while. The measurement was repeated several times.

The received signal varied at each 30-second sampling but overall it could be simplified as a sequence of "square wave with different levels" (the width was around 3 minutes) with a sinusoidal trend.

An example diagram to explain what I meant(Apparently, it's not the real data but resembles a lot) 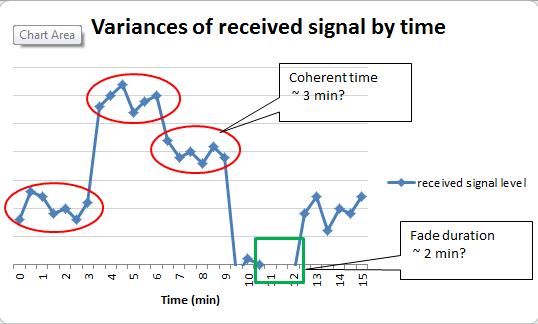 You're only observing power transmission, not phase - where I come from, we care about that just as much, so coherency would incorporate phase and amplitude of the channel coefficients just as well.

Anyway, if the phase of your channel impulse response doesn't matter to your application, then these measurements are OK.

You definitely can't say your coherence time is three minutes.

So, we can even say that the coherence time is smaller than 30s, and your measurement isn't fine enough in time domain to even measure that.

The channel is a result of its environment. If there's movement in your medium, and movement in your transmitter, you'll need to measure "often" relative to the amount of time it takes for movement to achieve a displacement in the order of one wavelength. f = 500 MHz = 5 · 10⁸ Hz leads to a wavelength of \$\lambda=\frac cf=\frac{3\cdot10^8}{5\cdot 10^8}\,\text m=60 \,\text{cm}\$; let's say you'd at least want to look whenever something moves a tenth of that, i.e. 6cm. (realistically, a channel measurement would try to look > 100 times per wavelength of movement, rule of thumb, but 10% does sound like a start)

You don't mention relative movement speeds, but let's roll with 1 m/s. Then, 6cm of movement would take 0.06 s, which is way, way less than the 30s you're measuring, but still larger than the coherence times we observe in microwave indoor communications (e.g. WiFi, but that has significantly smaller wavelengths, too!).

Can I assume the no-signal period to be fade duration?

no, because that could just be a random observation; your observation is too seldom to say whether the channel is "good" in between.

How to model the channel when the TX-RX distance was not stable? Can I develop a model for the changes of received signal against time?

Not the answer you're looking for? Browse other questions tagged rf telecommunications propagation dielectric channel or ask your own question.

3
How to conduct “Transient Power” measurement according to ETSI EN 300 220-1 (v2.4.1)?
1
Are voice, text and data shared the same channel in 2G, 3G and 4G networks?
0
What is meant by the term 'time selectivity' of radio channels? And how is it much faster for mm waves compared to radio waves?
2
Capacitor between grounds: Reason and how to decide the value
1
Wireless Channel Modeling and Channel Estimation
1
For oscilloscope, what are the differences for Glitch Capture Channel and Sample Channel?
0
Impact of “reference level” and “RBW” on the time domain signal in spectrum analyzer?
0
Need help with understanding the pros and cons of geometric and stochastic based channel models. Which one s preferred under which conditions?