For HDL design I'm currently developing for a zynq SoC, I need to invert a clock signal because of a swapped differential pair on board level.

Using "NOT" to invert adds a LUT in the path and as such introduces skew of at least 500ps between the inverted one and the original one (which is also put on an other differential output. And this is too much in our case.

Is there a way to invert a clock signal so that the skew between the original and the inverted copy is minimal?

I have found a possible solution using the ODDR primitive but this seems more like a workaround than a solution.

With Xilinx devices, using an ODDR is actually the recommended way to output a clock signal on a pin, especially if you have tight timing constraints. Do this for both clk and clk180, and both will have the same, repeatable timing. It is not a workaround at all.

See comment on the Xilinx forum here by a Xilinx Engineer:

ODDR keeps the duty cycle and provides the best possible path. No routing of clock on any interconnect, clock remains on the global clock resources where they belong.

Output DDR can forward a copy of the clock to the output. This is useful for propagating a clock and DDR data with identical delays, and for multiple clock generation

You could play around with balancing LUT delays with other LUTs, ODELAY, and constraints, but this will not approach the simplicity or timing predictability of the ODDR method.

You could try to add the same delay to both outputs. The trick is to introduce logic which can not be optimized away but adds a LUT delay.

You are probably familiar with using EXOR gates to conditionally invert a signal.

I would add an EXOR function to both output ports. One EXOR's "control" signal is high the other is not. The control signal into each EXOR gate must be such that it could change. e.g. a register which you can write a one or zero to. You never will do that but the synthesis tools does not know so it has to keep the EXOR gate. It can't optimize it away.

Yesterday I tried to prevent logic from being optimised away using various Xilinx constraints but failed. In the end I used the certain-to-work-method I described above but I used an input pin to make that the non-inverting LUT is not optimised away:

This is the result of the outputs after place & route: 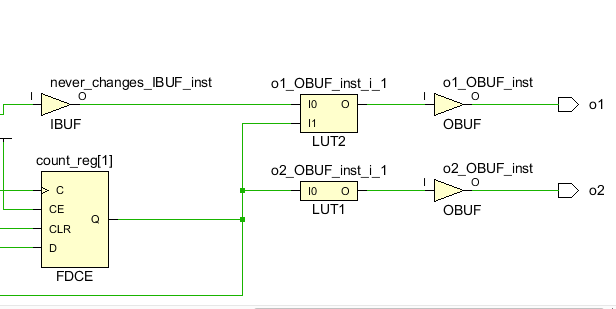 Not the answer you're looking for? Browse other questions tagged vhdl clock hdl zynq or ask your own question.

4
Timing and clock skew problems in digital designs
0
Inferring BUFGMUX in Xilinx FPGAs for Clock Multiplexing
4
Clock skew? Good or bad?
3
How to route a LVDS clock from FPGA input to output?
1
It is better to have a negative clock skew?
0
Clock Configuration of Zynq Processing System
0
LVDS: length matching within a pair and between pairs
0
Connect to Xilinx Zynq 7030 via JTAG connection?
1
Booting the processor on a Xilinx Zynq 7000 before the logic
1
How fast is L1 cache of ARM Cortex-A9 in Xilinx Zynq-7000 FPGA?