SIM800C GSM module works via PC but not on battery

Before giving the specifications of my project, I'd like to say that I'm a total beginner in electronics but I do have a background in IT development.

I also want to apologize if this question has been answered already but I can't find any thread that answers this specific question.

I am trying to power a SIM800C GSM module via Li-Ion battery but it doesn't seem to work. The module is powering-up fine and SEEMS to work since it blinks every 3 seconds after a short period (seems it's connected to the network) but when I send the AT command via my PC (going through a NodeMCU), I got no response.

In the meantime, if I power up the module via my PC, it works just fine, the module is able to answer the AT command.

The amps seemed high to me so I unbuilt the battery and discovered 3 little batteries in series, each outputing 3.7 to 4.2 Volts and 1500mAh.

I then proceeded to power the module with a single little battery and by the led blinking 1 time every 3 seconds I could tell the module was powered-up and theorically working, but still no response on the console.

I also tried to power-it up via the charger of my phone and the same effect goes : The module is powered-up but doesn't take AT commands.

To sum up what works and what doesn't, I'll link two schemas, one is a "working" one and the other isn't.

Below is the working one : 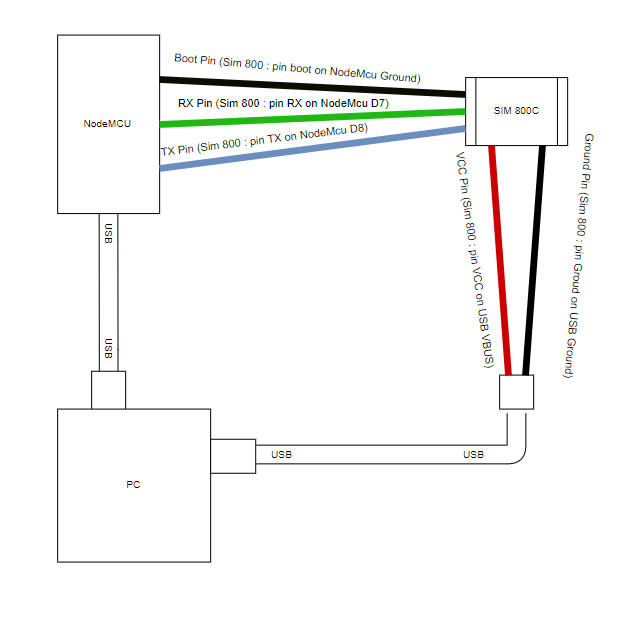 And then, the non-working one : 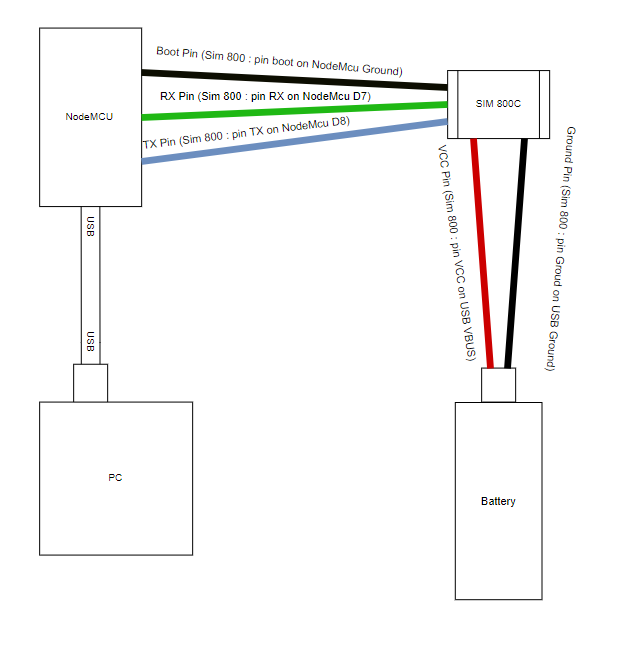 I read here and there that I should use capacitors or resistors, but I am totally lost under all the information.

Do you know how should I proceed to get the answer from AT commands ?

Thanks in advance and once again, sorry for my noobyness

Edit: Here is a photo of the montage. We can see the NodeMCU being powered by USB in the center, the battery in the bottom left as well as the GSM Module (SIM800C) in the bottom right of the picture. 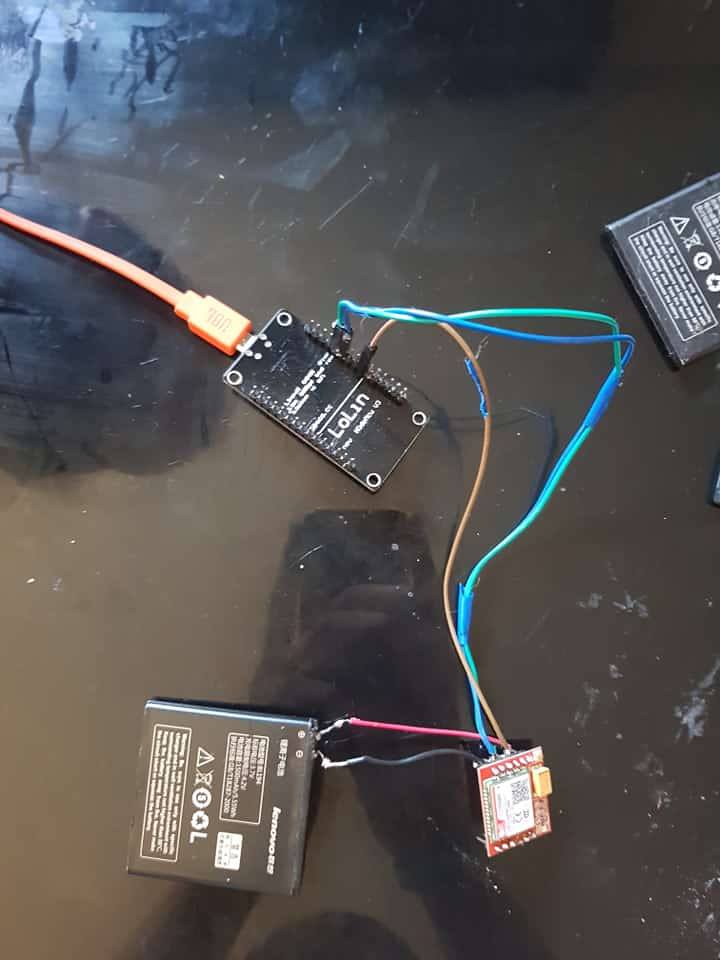 Have you ensured that there is a shared ground between the SIM800 module and the NodeMCU module? In your first example this common ground would be provided by being connected to the PC over the USB connections but in your second schematic there doesn't appear to be a connection.

Even though you have the NodeMCU GND pin connected to the BOOT pin on the SIM800 you should provide a dedicated ground to make sure that everything shares the same point of reference.

See this post for further information: Why do networks need a common ground cable?

I suspect there is a case of mistaken pinout here. To be absolutely sure it would be helpful if you post high resolution photos of both sides of your SIM800C board.

When I search for these modules on web most of them look just like yours:

Note that pin next to VCC is called "RST", which is "reset". There are also boards that look like this:

The pinout is identical, only the pin is called "BOOT". However the text in the picture says "link GND".

I suspect this is what caused the confusion. In both cases this pin is connected to PWRKEY input on SIM800C. Here is what the description says:

PWRKEY should be pulled low at least 1 second and then released to power on/down module.

I guess this is what whoever made that picture meant under "link GND": "connect this pin to GND to establish the link". It did not mean "this is ground for link connection".

So, there are two things you have to do:

If you use a button you press it for 1 second to power on SIM800C. If you use GPIO pin then in your code you have to output "0" for 1 second, then make pin tri-state.

Not the answer you're looking for? Browse other questions tagged power-supply gsm nodemcu or ask your own question.

10
Why do networks need a common ground cable?

1
GSM module working when powered by laptop via USB but keeps restarting when powered by battery
0
Receive SMS from GSM module in a battery powered system
0
What is the problem with the GSM 590e module?
1
GSM Module resets SIM card
0
sim 800c doesn't get registered in network
1
Need help finding pin layout diagram for GSM module (SIM800c RPi development board)