Using a diode to ensure current flows in only one direction, without causing a voltage drop

To power my microcontroller (ATmega8), I am using a ~5.4V voltage source. I want to ensure that I don't accidentally connect the voltage source in reverse, and figured a diode would be a nice way to accomplish this as from what I have learned so far, a diode allows current to flow in one direction, and blocks it in the other.

But what I also learned is that diodes create drops in voltage. I have a few of the typical diodes (1N4001, 1N4148, etc.), and would like to use them to achieve the aforementioned result without dropping the voltage as it would be too low to power the IC.

My question is, is there any way to do this with a diode? Or do I need some other component (if so, what would you recommend)?

You do not want an as low as possible voltage drop. The ATmega8 is specified for 2.7 V to 5.5 V operation, and that 5.5 V is actually 5.0 V with some margin. In the datasheet you'll see many parameters specified at 5 V.

So let the voltage drop. Allow a 500 mV drop. The ATmega will consume only a couple tens of mA. A 1N4148 will drop typically 900 mV at 50 mA, which I would accept gladly, but which you may find too high. In that case go for the Schottky, like also suggested in other answers. You don't want a Schottky diode with a 100 mV drop, go purposely for one with worse specs. This one will drop 450 mV at 100 mA.

An actual diode is limited by the laws of Physics [tm]. Actual voltage will depend on current and voltage and device used but, as a guide, under very light loading a Schottky diode may manage somewhat under 0.3V but this typically rises to 0.6V + as loading approaches maximum allowed. High current devices may have forward voltage drops of well over 1V. Silicon diodes are worse by a factor of two to three.

Using a MOSFET in place of a diode provides a resistive channel so that voltage drop is proportional to current and can be much lower than for a diode.

When the battery polarity is correct the MOSFET gate is negative relative to the source and the MOSFET is correctly biased on and load current "sees" on the FET Rdson = on tresistance. How much this is depends on the FET chosen but 10 milliohms FETs are relatibely common. At 10 mOhm and 1A you get only 10 milli-Volt drop. Even a MOSFET with Rdson of 100 milliohm will only drop 0.1 Volt per amp carried - far less than even a Schottky diode. 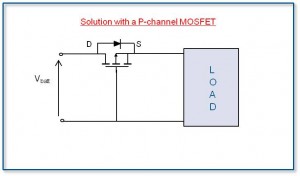 Same concept as above. N & P channel versions. MOSFETs cited are examples only. Note that the gate voltage Vgsth needs to be well below the minimum battery voltage. 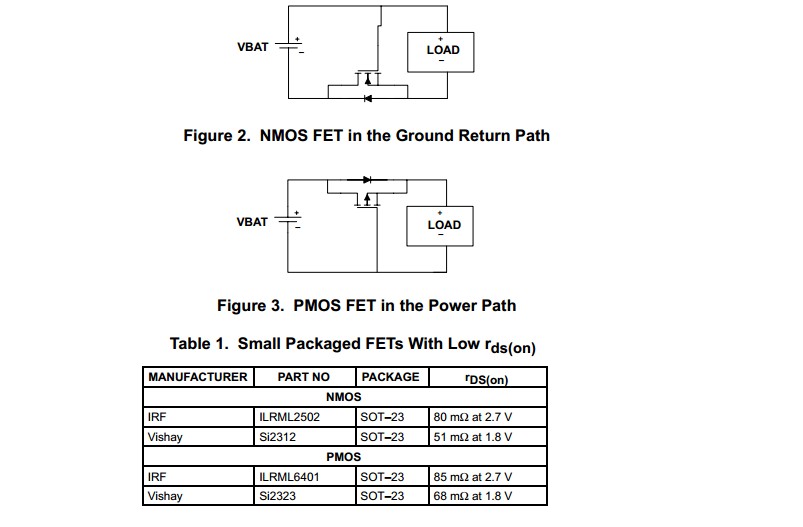 A Schottky diode would be a good solution and it's what I ended up choosing for power path polarity protection on a PIC development board I made this week. Schottky diodes have a very low voltage drop compared to many other diode types, notably the general purpose ones. A popular use for Schottky diodes is to use them for high frequency circuits since they have a fast switching speed, though they are also known for their low forward voltage drop. A drawback to them, however, is their relatively lower breakdown voltage compared to other diode types. If you're just looking for polarity protection for a 3.3v/5v microcontroller or other low-voltage application, this might be ideal for you because the low voltage drop is appealing and the low breakdown voltage is still probably higher than you need. Pick a diode with specs that match your required maximum voltage drop at expected current draw, load current draw, and breakdown voltage. Digikey.com makes this very easy; it should be very straightforward from there.

To protect a circuit from reverse polarity using a diode but with no diode drop, replace the diode with a fuse, and connect a fairly large diode in reverse polarity across the power rails, after the fuse of course. It must be able to continuously handle the maximum current of the fuse as well a high pulse rating, which diodes generally can do.

This is how all the power inverters work. They can draw hundreds of Amps at 12 Volts, but reverse polarity only blows the fuses.

Another solution for low current devices is to replace the fuse with a resistor. The Voltage drop across the resistor can be less than a diode at low currents.

Another way is to use a diode in a MOSFET, since a MOSFET has a diode inside it. To protect the positive supply, use a P-channel device in such a way that the diode protects the device from reverse polarity with the gate turned off. Now you just have to make some logic (such as a single resistor and small signal diode) to turn on the gate when the polarity is correct, then that .6 Volt diode drop will now turn in to the MOSFET's Rds MAX resistance or less. MOSFETs turn on in both directions.

6
Use diodes to obtain lowered DC voltage?
2
Diode survivability at 260°C
13
What happens after a zener diode breaks down?
3
Zener diode can vary current flow to maintain voltage drop, how does this magic effect work?
1
what happens with diode voltage drop when connected directly to constant voltage supply?
3
How do I calculate the voltage drop over a diode OR gate?
2
Voltage of Different Voltage Sources in Parallel with Diodes
1
Can I use series diode to drop voltage from Lithium Ion battery to ESP8266?
5
Adding Diodes to Transistor Astable Multivibrator; 1N5818 Schottky diodes work but 1N4148 diodes don't; can't figure out why
0
Puzzled with parallel forward biased diodes with common anode and different cathode voltages