I am working on an engineering design project for school which uses the electromagnet linked below to "lock" a door. The problem is that the electromagnet remains energized or magnetized even after turning off power to the coil. I believe this is because the core of this unit is tool grade steel and not soft iron so a magnetic field is induced while the magnet is powered on and is retained in the material after it is powered off.

My plan to counteract this behavior was to reverse the polarity supplied to the electromagnet for a short period after powering off the lock which would hopefully "release" the other side of the door lock. Unfortunately, even physically swapping the leads to the electromagnet does not change the direction of the field and it is not reversible. I don't know if there is an internal rectifier in the magnet or if the physical windings in the coil do not allow for a reversal of the field. Is there something I can do with the circuitry to counteract this or should I shop for a dual coil electromagnet that can be reversed?

If you want to demagnetize something, you actually have to use AC current, rather than opposite DC. Assuming the problem you are experiencing is residual magnetism you should be able to test by sticking the magnet to other things. Unless they've put a diode in the 2 lead electromagnet you're considering, you can reverse it, it'll just immediately remagnetize the other way and keep holding. Why do you assume the core is of an unsuitable material?

Magnetic remanence is caused by magnetic saturation and, if you drive the electromagnet at a slightly lower level, the proportion of magnetism remaining (when the current falls to zero) compared to the driven level reduces significantly. See this from wiki: - 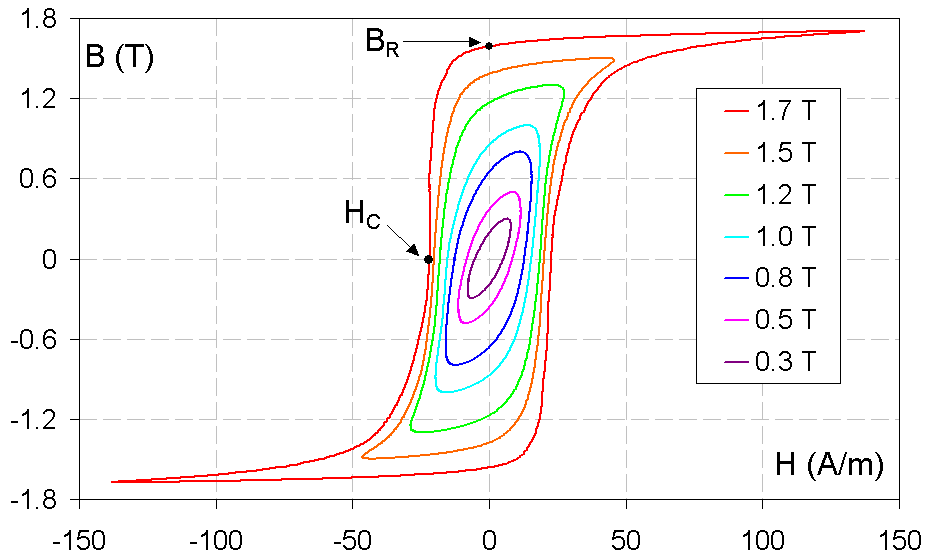 My advice is to put a resistor in series with the electromagnet to limit the saturation of the core and thus deliver a significantly lower magnetic remanence. This may be enough to achieve what you want. If not then I suggest that instead of the electromagnet forming a closed loop magnetic field when locked, you add (say) a 1 mm space to prevent the peak flux density reaching saturation levels. Clearly the electromagnet can start to pull with a gap of presumably much more than 1 mm so restricting the final 1 mm movement should not be a problem.

Add a contactor from a.c unit the condenser single pole and problem solved. Add 24V to each side of coil energize and it will switch.

Not the answer you're looking for? Browse other questions tagged arduino h-bridge polarity or ask your own question.