I've followed some great resources that describe how to physically setup the sensor (vertical orientation, covering the sensor with tape/paper but leaving the air inlet/outlets uncovered, keep away from an air stream, etc).

I've run different projects (written in C) as well written my own code (in Python) to get the calculated values. However, what I'm finding is that regardless of the project I use, P1 and P2 almost never provide a LOW pulse. So, I end up getting a lot of zeros. For example, I ran the previously mentioned project overnight and didn't see a single calculation above 0 for the whole night.

If I remove the tape from the sensor opening, and move my hand up and around the opening, I do start to different values for the calculations. This is obviously just because of the change of light, but it's been an interesting way to make sure that the photo diode is still working.

I've tried to use my phone's camera to see if I can see the infrared LED (as seen in this deconstruction of the PPD42). I can't seem to pick up the PPD42's infrared LED on my camera but I can pickup infrared LED from my TV's remote.

I have a digital multimeter where I tried to debug P1 and P2 without connecting to my Raspberry Pi. I should be able to see the voltage drop from ~4V to ~0.7V when particles are detected (according to the specification sheet). Unfortunately, the multimeter just measures ~4V all the time. My guess on this is that the expected pulse duration of 10-90ms is probably too short for the multimeter to measure? Or, is this further indication that I'm never getting pulses from the PPD42? I have a second PPD42 that behaves the exact same (I just recently purchased them both new from eBay).

Is there anything else I should be doing to debug this sensor and see how I can get LOW pulses? Could both of my units be defective?

I've confirmed that the IR LED seems to be functioning. I used my Nintendo Wii Remote's IR camera and the Wii U's "Sensitivity" view. I pointed the Wii Remote's IR camera at just the right angle inside the PPD42's sensor opening and was able to see a dot on the Wii U's "Sensitivity" view. So, I seem to be back to square one. So, the unit appears to be functioning but it's just not sensitive enough.

The PPD42 outputs could be close to 5V (original spec was minimum 4.5V, newer spec is minimum 4V), but Raspberry Pi inputs should not exceed the RPi supply voltage of 3.3V, so some form of level translation is needed for higher-voltages. See this related discussion about connecting that sensor to an ESP8266. (Update: You've kindly explained that you did use a voltage divider between the PPD42 output and the RPi input. However I'll leave this info here for future readers who might not realise this is required.)

All my test suggestions below are with the PPD42 outputs disconnected from the Raspberry Pi.

as seen in this deconstruction of the PPD42 [...] I can't seem to pick up the PPD42's infrared LED on my camera but I can pickup infrared LED from my TV's remote.

This is a very bad sign. You have a confirmed working IR detector (because your camera can "see" the TV IR remote's LED) but which does not show IR emitted from the PPD42 LED. :-( The IR LED in the PPD42 should be lit continuously.

My guess on this is that the expected pulse duration of 10-90ms is probably too short for the multimeter to measure?

Even for a working PPD42 (see below) that's true. According to its datasheet, at its maximum specified detection rate, the PPD42 outputs low pulses for only (typically) 13% of the time, and so its output would still be high for most of the time.

Your only indication of low pulses on a digital multimeter, might be an apparent slight instability in the reading; on an analog multimeter, you might see brief "flicks" of the needle, certainly on 90ms low pulses. This is one area where analog multimeters can allow us to infer more information than basic digital meters, and is why some digital multimeters have a faster-updating (but less accurate) "bar graph" display, as well as the slower-updating (but more accurate) main display.

Or, is this further indication that I'm never getting pulses from the PPD42?

In your specific case, due to the apparent lack of IR from its LED, I suspect this could be true for your sensors. Using an oscilloscope, a logic analyser, or an old style logic probe would confirm for sure.

Could both of my units be defective?

It's impossible to rule out that possibility, with the information so far.

Is there anything else I should be doing to debug this sensor and see how I can get LOW pulses?

If you are able to do any of those tests, then we can try to interpret the results.

(†) I believe there are some errors in that schematic e.g. R14 and R15 (both 10k) are shown as pull-downs, whereas my interpretation of the PCB image is that they are pull-ups to 5V, and the PPD42 specification also says the outputs are op-amp outputs with 10k pull-up.

Of course I could be wrong, as I no longer have a PPD42 sensor to make my own measurements. I just recommend caution in believing the (very helpful, but perhaps slightly incorrect) schematic, until you have confirmed its accuracy yourself.

Understood. A cheap USB logic analyser (e.g. a Saleae clone) costs < $10 and can be used with open-source Sigrok / PulseView PC software. Depending on how important this issue is to you, it may be worthwhile getting one. Oscilloscopes obviously cost more, but can show signal quality in a way that logic analysers cannot. Both might help in this situation.

With the LED + resistor was connected between P1 and 5V:

Wouldn't this indicate a constant LOW pulse from P1 or perhaps it's the opposite?

It's the opposite. I thought it was easier for you to look for short flashes of the LED lighting (each flash of light meaning P1 output was going low), rather than looking for short gaps in a normally lit LED.

The LED blinks on/off when I move the box around and wave my hand around the sensor opening (I removed my tape).

That's effectively the same result as your previous "hand-waving" test where, with the sensor open, you were getting different values in your RPi pulse-counting software.

On its own, I get a small LED blink on/off every minute or so.

(I'm assuming that this is with the sensor closed and so in a normal test setup.)

This is new information.

Before, it seemed there was no output from the sensor, as you said:

what I'm finding is that regardless of the project I use, P1 and P2 almost never provide a LOW pulse. So, I end up getting a lot of zeros. For example, I ran the previously mentioned project overnight and didn't see a single calculation above 0 for the whole night.

Now it seems that there are low pulses from the PPD42 - just not very many of them! I believe that this is only possible, if the sensor's IR LED is producing some output. However the lack of IR output visible on your camera contradicts this hypothesis. Perhaps the sensor's IR LED has a very focused beam, and your camera was not at the right angle to see it? Or perhaps the IR LED is just very weak (faulty? wrong type fitted?).

Whatever the reason, this apparent contradiction between two data points (IR LED seems to be working, as you get some sensor output pulses; yet IR LED seems not to work, as not visible using IR-sensitive camera) is something I would focus on understanding.

That gives more and more confidence that the sensor's photodiode and amplification, filter & output circuitry are basically working.

I'll have to find another IR source to test with constant IR light.

I'm not sure how that would help - perhaps if you can fit that constant IR source (another IR LED?) in place of the existing sensor's IR LED, you can see if the number of output pulses increases? I can't think how else to use a constant IR source which isn't physically in the correct place, relative to the photodiode and its lens. Of course that will end up with an uncalibrated sensor.

Different DC voltages measured with a multimeter are difficult to interpret in this situation, for the reasons explained before. They probably mean that there were different proportions of low pulses, resulting in different average DC values displayed on the meter. However I don't see how it's possible to rule out that the normal, static "logic high" voltage has changed.

Based on the new information that there are occasional low pulses in the sensor's output, here's another test:

The particle sensor works by detecting the light current particles reflected from IR light focused to an intersecting path of the Photo Diode (PD) at a 45 degree angle.

The sensor relies on very tiny particles moving slowly by a controlled slow heat rise and slow air flow pump. It the particles move too fast the low pass filter before and after the output stage will reduce the full pulse height from reaching the 1V & 2.5V thresholds for a negative pulse output. The beam focused emitter beam path is about the same size as the 5mm PD so the particle detection moving past a 5mm depends on a slow speed with a 39ms=T low pass filter so that particles reflections of 10ms minimum are about the threshold of detection.

This translates to 5mm/10ms or 0.5m/s as the maximum velocity for a particle and that is controlled by the heater resistor.

Simple test methods without a scope. 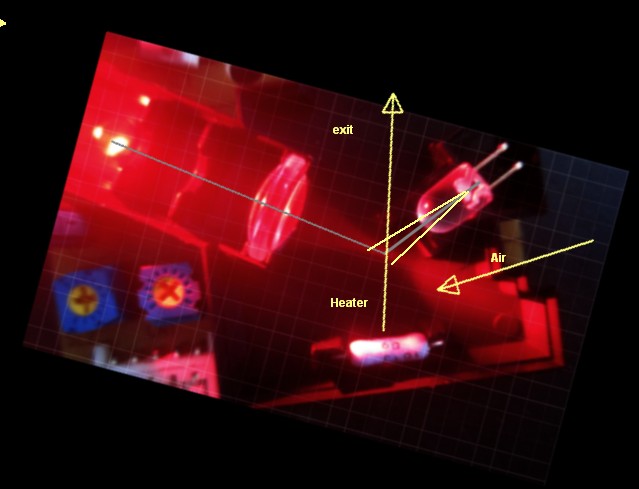 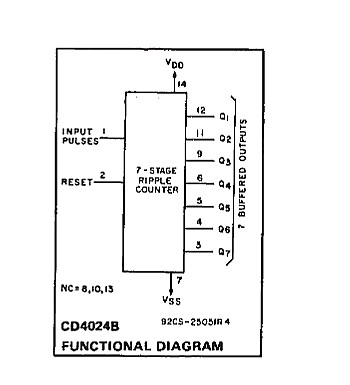 Connect P1,P2, 5V, gnd with telephone wire to breadboard. Reset to Gnd and LEDs Anode to each output and cathode to gnd (Vss), +5V to Vdd. add e-cap across 5V rail. ( no series R needed for CD4xxx on 5V) add optional pushbutton for Reset ("1") with 10k to gnd or equiv.

Not the answer you're looking for? Browse other questions tagged sensor raspberry-pi or ask your own question.

2
Why do my 3 custom voltage pulses stop working as soon as I plug in the A1362 Hall-Effect sensor?
1
Am I following the procedure to set the sensitivity in Try Mode for the A1362 Hall-Effect sensor correctly?
2
Is it possible to program a hall-effect sensor with an Arduino?
1
How do I know if my hall-effect sensor is working correctly?
1
Arduino project: ultrasonic sensor + 5M 5050 RGB LED strip lights
0
How to test if an IR sensor is broken?
0
Circuit for high voltage pulses using raspberry pi PWM to drive a piezoelectric actuator
1
Controlling a FESTO solenoid valve with Raspberry Pi - Trigger Issues