Use of inductor for filtering

The number of capacitors and an inductor are used at the input side(forms pi-filter) for filtering, in order to reducing electrical noise, frequency noise, switching ,etc. This type of filtering technique is always good for motor type of load connected to the battery.

The given image is filtering 48v (pi filter),the image source is taken from internet. But why they use specifically 4.7uH, any mathematical calculation is there.

How do I choose a value of an inductor for a pi filter?

Thank you for your response guys. The load connected to the supply (48v) is bldc motor. But the motor will surely runs above 10khz. But as per the calculation it shows only 3.4khz. I am bit confused, bcoz the controller going to produce 10khz pwm frequency. Sorry if I am wrong.

Eg: If we connect such supply (48v pi filter design) to micro-controller after regulating. I think the controller will produce above 10khz. Then why the design has made for 3.4khz. I am a learner, sorry I am wrong anywhere.

why they use specifically 4.7uH, any mathematical calculation is there

The main filtering is performed on the voltage across the motor with respect to the 48 volt power source (the input). Forget about it being a pi filter for now and ignore the capacitors at the power supply side on the left. The total capacitance across the motor is 445 uF and, with the 4.7 uH inductor, the resonant frequency can be calculated by: -

The schematic also tells us what the saturation current is for the inductor. It says 78 amps so this circuit is intended for high current applications and an estimate of the equivalent load presented by the motor at full speed might be about 2 ohms. I'm basing this on a full-load current of ~26 amps i.e. one-third of the stated inductor saturation current. This is just an estimate of course.

And here's where I see a problem. If I calculated the quality factor of this circuit assuming a 2 ohm load I get a value of nearly 20. This is based on: -

This level of Q worries me because it means that if a step input of 48 volts were applied to the input (left hand side) then the resulting transient response across the motor and capacitors could peak at 92.3 volts. See this simulation: - 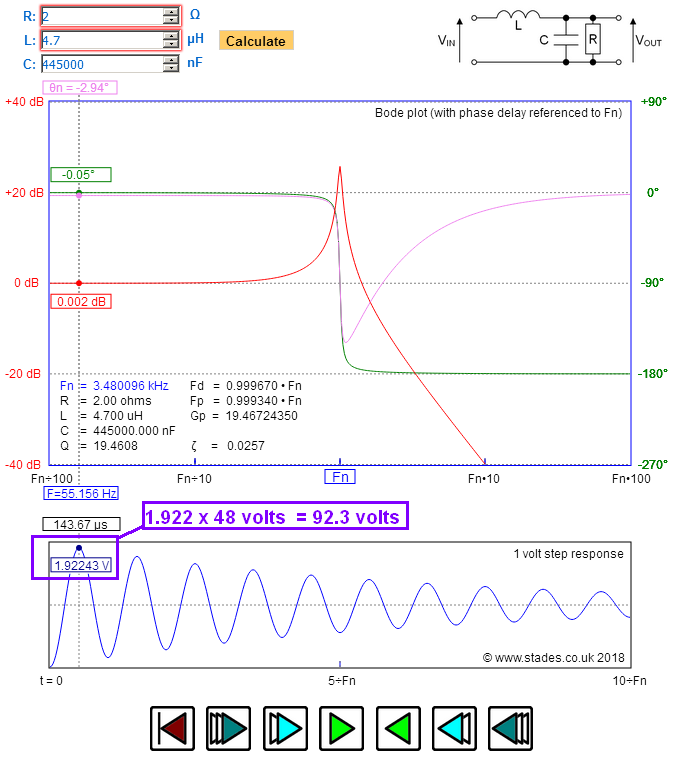 In other words this is too close the the voltage limits on the capacitors for my liking. I would want the peak voltage to be no more that 70% of the capacitor voltage rating. I am also concerned about the ripple current ratings for the capacitors too.

These are not mentioned but ripple current can be estimated based on the light load scenario where a step input response could produce a long decaying sinewave across the capacitors of 96 volts p-p. This is an RMS voltage of 34 volts at a frequency of 3.48 kHz. At 3.48 kHz the overall capacitive reactance is 0.1 ohms. The capacitors will of course have an ESR of maybe 0.5 ohms so, if 0.5 ohms is used as the limiting factor on current, the RMS current could be 68 amps. This would concern me if the capacitors were chosen without respecting the potential ripple current.

As for the input capacitors across the 48 volt rail (forming the rest of the pi filter) I would regard these as noise suppressors. Any commutation noise that arises from the motor that isn't half beaten to death by the 445 uF would be further reduced by the input capacitors.

On the face of it I'd be concerned with this as a design (reading between the lines).

There are two ways to use mathematics and modelling with circuits, analysis, and synthesis.

In the ideal world, we'd use synthesis. Given a specification, of what frequencies do you want to attenuate by how much when going through the filter, we'd come up with a formula for what value components to use in the filter.

However, most of us are not that clever, so we use analysis, or even a circuit siumulator. Given those component values, what does the circuit do? Then we compare what the circuit does with what we think we want the circuit to do, make changes, rinse and repeat.

That 4.7uH was arrived at by one of these two methods, as having achieved a suitable (for the designer or customer) level of attenuation for unwanted high frequency signals.

As mentioned in another answer, there is some concern about peaking in the LC circuit.

Based on some goal for dampening, a good number for the resistance is

Not the answer you're looking for? Browse other questions tagged power-supply inductor or ask your own question.