I've been studying inductors and wanted to understand the behavior as a circuit is switched off just like the one below, when the transistor is normally conducting and suddenly is turned off by, say, a microcontroller signal. I know it's weird but please, do not consider the Protection Diode across it, I could neither find a better image nor design one circuit here since I'm asking it via cell phone. 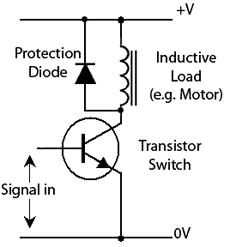 Thus, I know that V=L*di/dt and it's the induced voltage formula across an inductor. I know it's going to yield a large voltage as it's quickly turned off, because di/dt is going to be a huge factor. Also, the current which is supposed to flow through the inductor as t-> (infinite) is I=(V+) /R where R is the coil resistance. In addition to that, I know that as the transistor is turned off, the current in an inductor cannot instantly change, so it's going to be (V+) /R in the very first moment the transistor is off, and assuming it'll have a really high resistance when off, the voltage across the inductor should be large in order to try to maintain the current flowing just like before.

My point is I get confused on how to think correctly about it. What is actually the correct way to think? The way by which di/dt is large and so will be the voltage across the inductor or the way by which the current will try to be kept constant and as the transistor is going to be a huge resistance when turned off, the voltage across the inductor will then be large?

When the transistor open-circuits the static initial condition for the inductor is "so-many amps" flowing. That intial condition will generate a large voltage (theoretically and simplistically infinite) but we know parasitic (or intentional clamp) components restrict us to hundreds of volts.

Following the open-circuit event and making the simplistic assumption that the voltage stays constant for some time afterwards (assume there was a zener diode clamp at 100 volts for instance), we know that di/dt = V/L.

This means that after 100 micro seconds the current hits zero and there is no energy left in the inductor - it's all burnt off by the zener. At this point the voltage instantly collapses to zero volts.

I know it's weird but please, do not consider the Protection Diode across it

Without a protection diode and in the absense of parasitic capacitance in the transistor or inductor then the voltage is of course infinite and the event lasts for zero time. I don't find that to be a helpful scenario but you asked for it!