This is the one which has collision detection and other functions that makes it easy to send and receive data from the bus.

The I/K Bus is a common bus used in BMWs starting from the early 2000s to control windows, doors, and receive their status (and much more).

It has a pin name "SEN/STA" which is a bidirectional pin used to detect and control the bus state. When you read this pin, it shows logic 0 when the bus is free, and logic 1 when it is busy (thus you should not start sending your message). When you write to this pin, you can disable the "transmission path" (logic 1), or you can force it to be free (logic 0).

Although the chip has a lot of cool features I'm not able to use it to transmit any single message onto the bus.

My schematics is here (tried with the SEN/STA wire removed too):

Here is a scope image of the TX coming from the serial port (yellow), and the BUS line (purple). You can see that the IC tries to start the transmission on the BUS line, but immediately stops it. 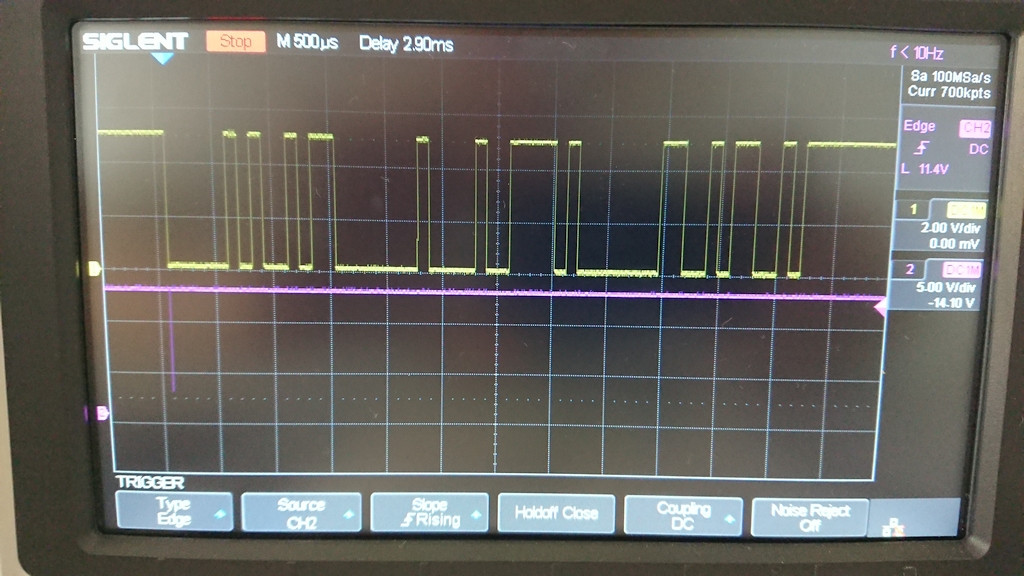 Here is a scope image of the SEN/STA pin (yellow) and the BUS (purple): You can see that the SEN/STA goes up during the requested transmission which is okay, but it should NOT stop the current transmission. It seems the IC thinks the BUS is busy and stops its transmission! 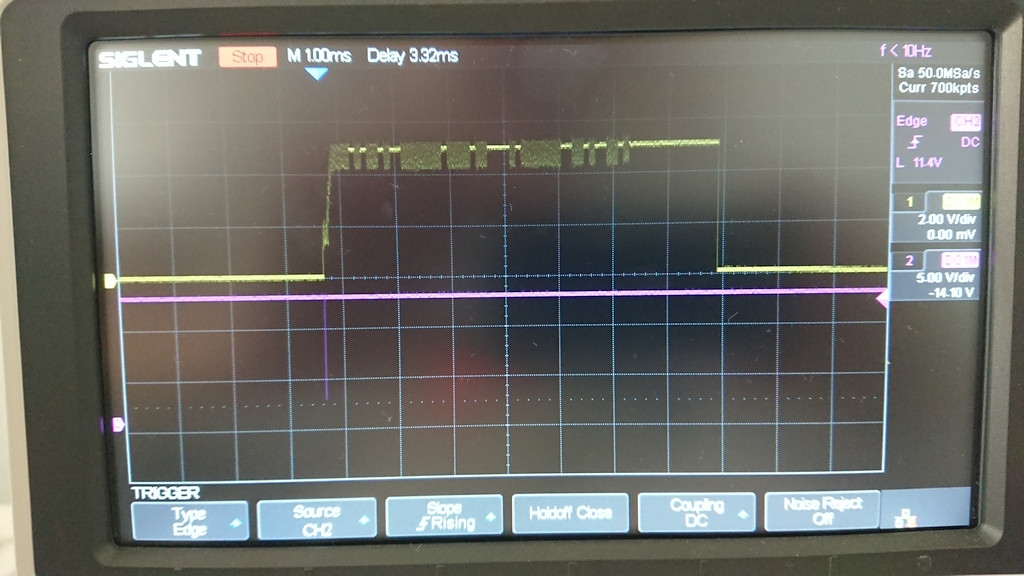 Here is a scope image of the SEN/STA pin (yellow) vs. serial TTL TX pin (purple): You can see the SEN/STA is high during the transmission (a bit later the yellow line went down, similar to the picture above). 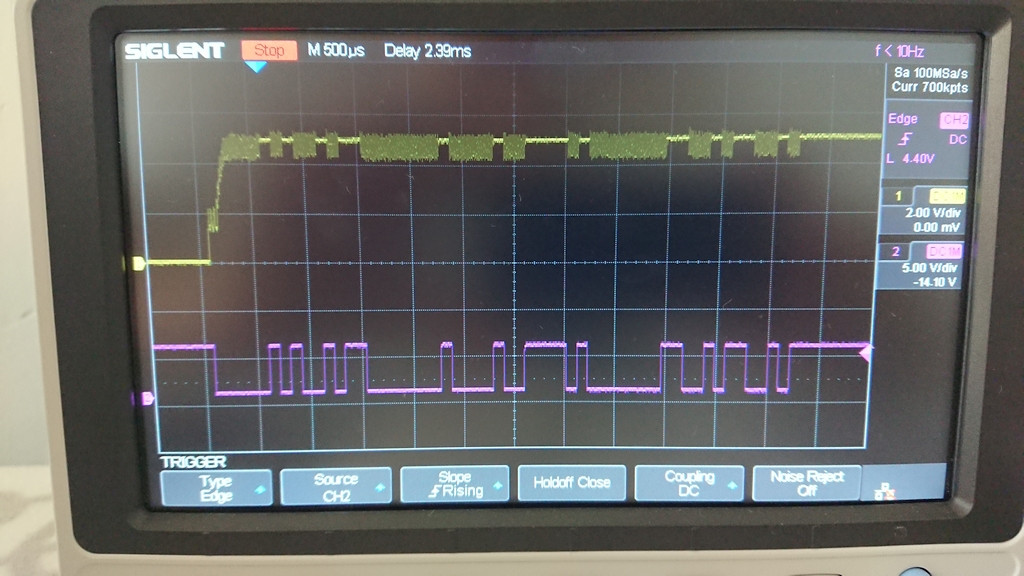 I think the bus logic of the TH3122 is fine, however it should not disable its own transmission.

Now I tried to force the SEN/STA to logic 0 during the TX. Here are my scope images for this:

BUS (yellow), TX (purple), you can see that transmission is disabled after each falling edge of the TX:

BUS (yellow), SENSTA (purple), you can see SENSTA is controlled to be logic 0 for the whole transmission operation as marked on Figure 3 in the datasheet:

You should force SEN/STA to 0 in order to transmit, as the datasheet clearly indicates.

Also, see the "Constant Low Switch Off" description. It means that your TX line should not be held low for more than 3 ms. If your protocol needs to transmit "0" for longer than that, you have to insert short "1" pulses periodically to prevent the transmission from being disabled.

I am looking at the documentation, and I have no idea how this wiring can work at all. If you have any links to the K-Bus specification it would be helpful.

The problem is, the output driver is a PNP open emitter. So, without pull-up all you can hope to get is a short spike on the input capacitor, exactly what you see on your scope. At least now you are getting those spikes on each TX pulse, and there is not any "blocking" as in the title.

From some obscure references there should be +12 V on the bus in idle state. Do you have that? I guess if you were to connect to a real BMW bus it would be pulled up somewhere by the car. If you do the experiments on your desk then you have to do it yourself. I don't believe the leakage current from the transistor base to emitter could possibly drive the entire bus up, unless you have a dozen devices connected to the bus simultaneously.

Here is the circuit according to documentation, including driver stage of TH3122:

Here is tiny bit of information found here: "network load: power-up resistors in Master and Power-up modules". This confirms my guesses above - you need to either test your adapter while connected to actual bus, or you need a 1 kΩ pull-up resistor on a bus to test standalone chip operation.

The internal 5V regulator not only outputs power for MCU, but also supplies chip logic and I/O circuits. So, it has to be enabled for proper operation. It requires all the capacitors as per "Figure 8 - Application Circuit" in the datasheet.

The EN pin can be permanently connected to VS or it can be controlled by MCU after MCU has been woken up by bus traffic.

Not the answer you're looking for? Browse other questions tagged automotive k-bus i-bus or ask your own question.

1
Proton current? and its potential effects in cars and circuitry
0
Swap between two colors without an additional light?
1
What is the use of series resistor in VBAT line of CAN transceiver?
2
IC Enable Pin not working as expected
5
Mimic a pick-up coil to drive a CDI ignition
0
Necessity of an Inductor at CAN Transceiver end
0
Is using a wire rated the same as its circuit's fuse OK?
1
CAN bus appears to have a collision in the middle of transmission