I have a gadget (a Sonar) that stopped working (doesn’t respond to power on, power led does not turn on) and opening it to look for the typical signs of failure I see an L7818 voltage regulator in TO-220 package that looks like it has overheated.

I’m confused about two things: First: Why would one use an 7818 circuit in a board powered by 12V DC? The board has an STM32 microcontroller and peripheral components (wifi etc) so I was expecting to see an L7805, not an 18V one. The 18V could be for powering the analog/sonar bits I suppose, but should I then not also find a 5V regulator somewhere for the logic parts? Just out of curiosity, what the likely power supply design here if input power is 12V (boat battery), and the board has a VRM requiring 20+ volts input, and having 18V as output?

Second: the product code on the VRM is a bit charred but looks like “L7818BT”. I can’t find that, but I can find an L7818CV. What is the meaning of the suffix letters in this case?

Edit: top and front view of the board. The VRM that looks overheated is the component screwed to a heat sink on the left in both pictures.

The small stacked pcb wth the large heat sink is related to the WiFi (black wire connects to a case antenna). The two large square components are both arm microcontrollers. 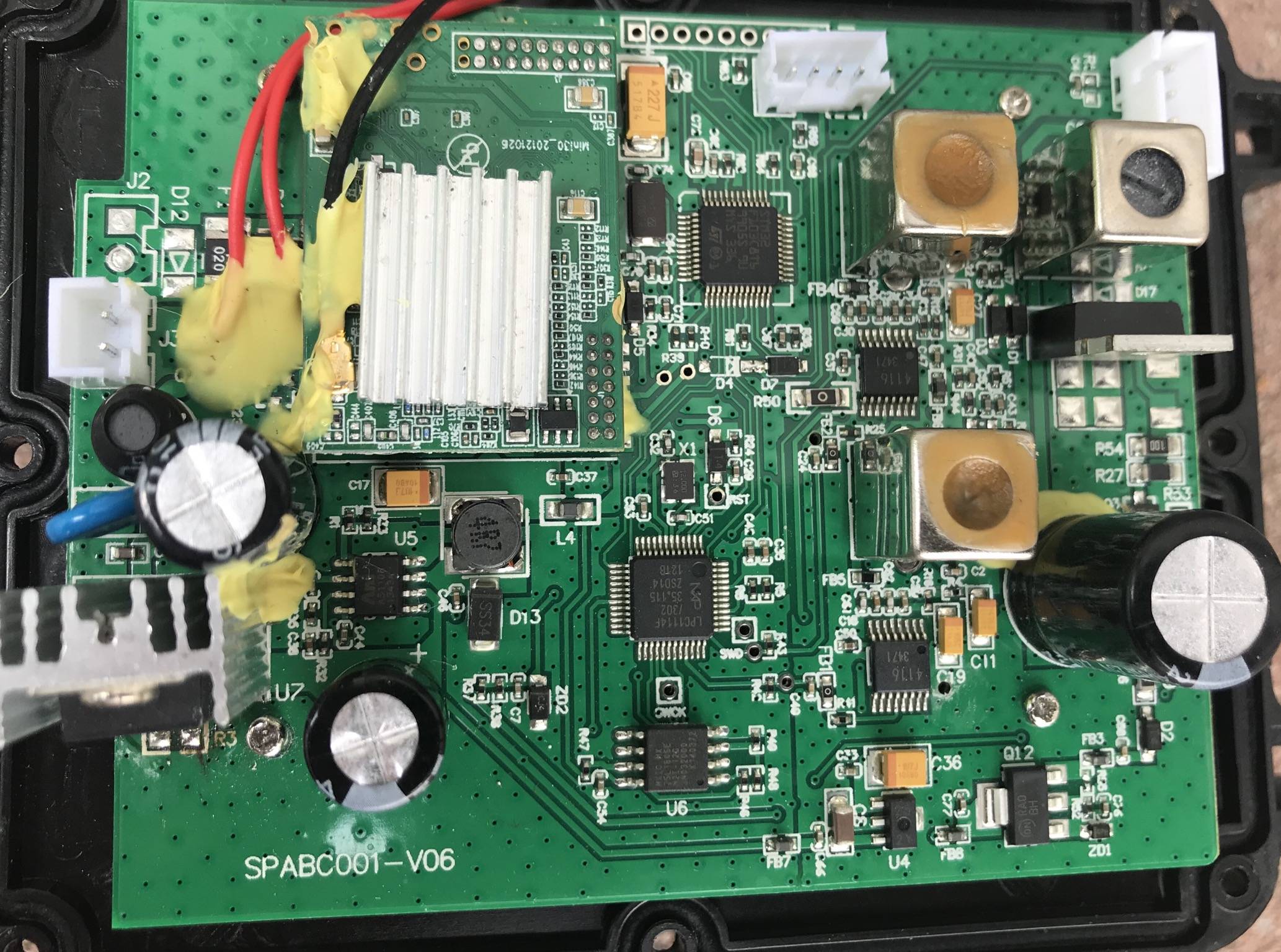 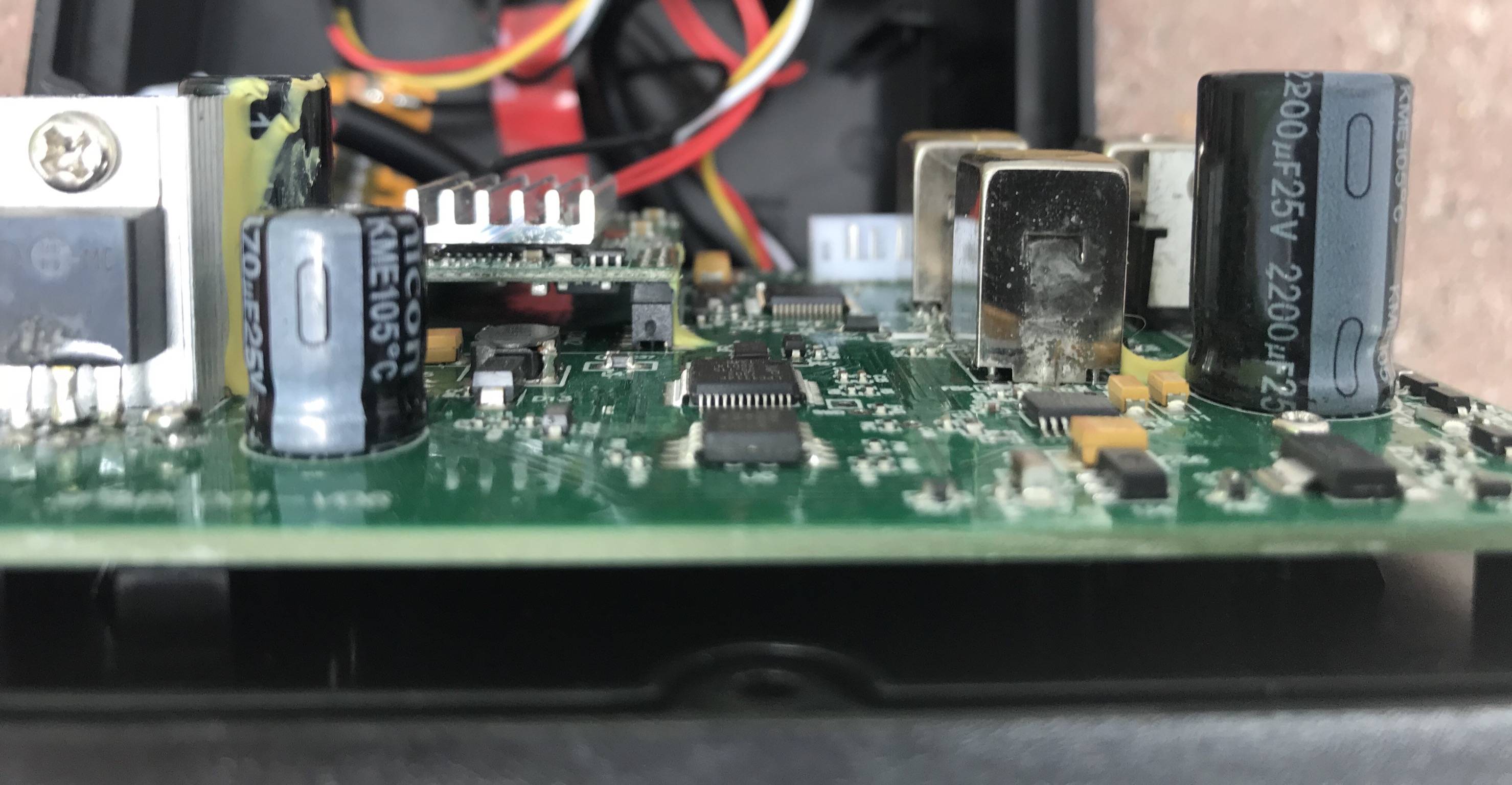 Update: some basic testing confirms the VRM is a red herring, or at least it's not the only issue. Applying 12V at the DC input (the 2 pin connection on the left), I can measure 12V at those solder points underneath only (see the last image). That is: there is no other place on the board that gets any voltage at all. I'd assume that means it has to be one of the very first components being bad then, or a mechanical/connection issue somewhere very near the power connector? Unfortunately the power button connection (the 2 red wires joining the PCB in a pool of yellow goo) hides a lot of the things in the area nearest to the power connection so I'm having a hard time figuring out what's going on right after the power connector. 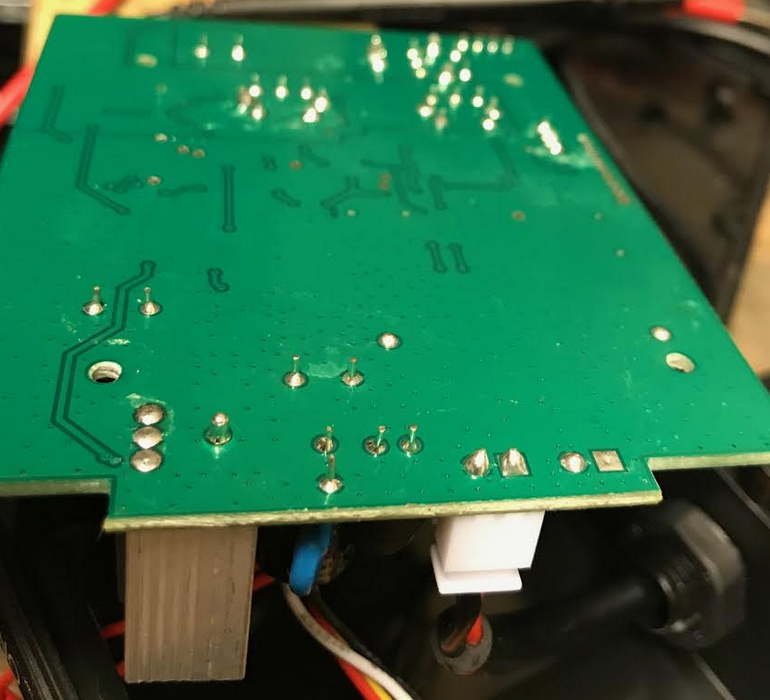 U5 looks like it could be your 5V (or 3.3V) switching IC. I'd imagine there's 10V coming from the 7818 into U5 from a 12V input. You can look up the data sheet from the MCUs and trace the Vcc pin and see what's powering it. Work backwards to find where the problem might be.

The suffix is usually the input voltage range it can take. Some 78xx can take up to 35V.

Not the answer you're looking for? Browse other questions tagged voltage-regulator replacement lm78xx or ask your own question.