Here I have the image of a signal in the output of U2, and the output is shown in green in the graph(sorry for the poor quality). Highest value = 3.3V, Lowest value = 0V, sine wave, 60 Hz. 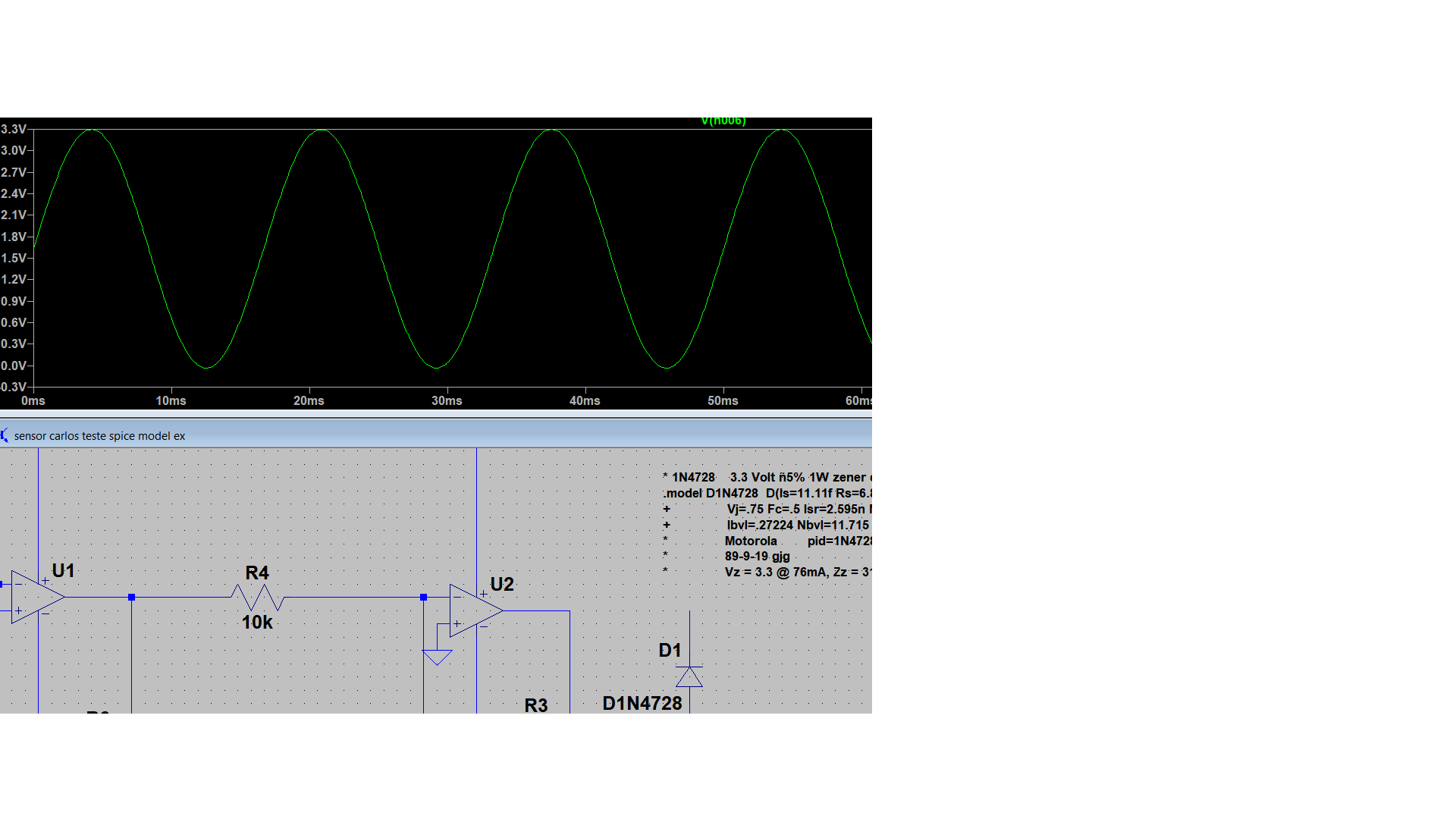 Now I have the same circuit but with that 1N4728 zener connected across and the output signal behaves like below: 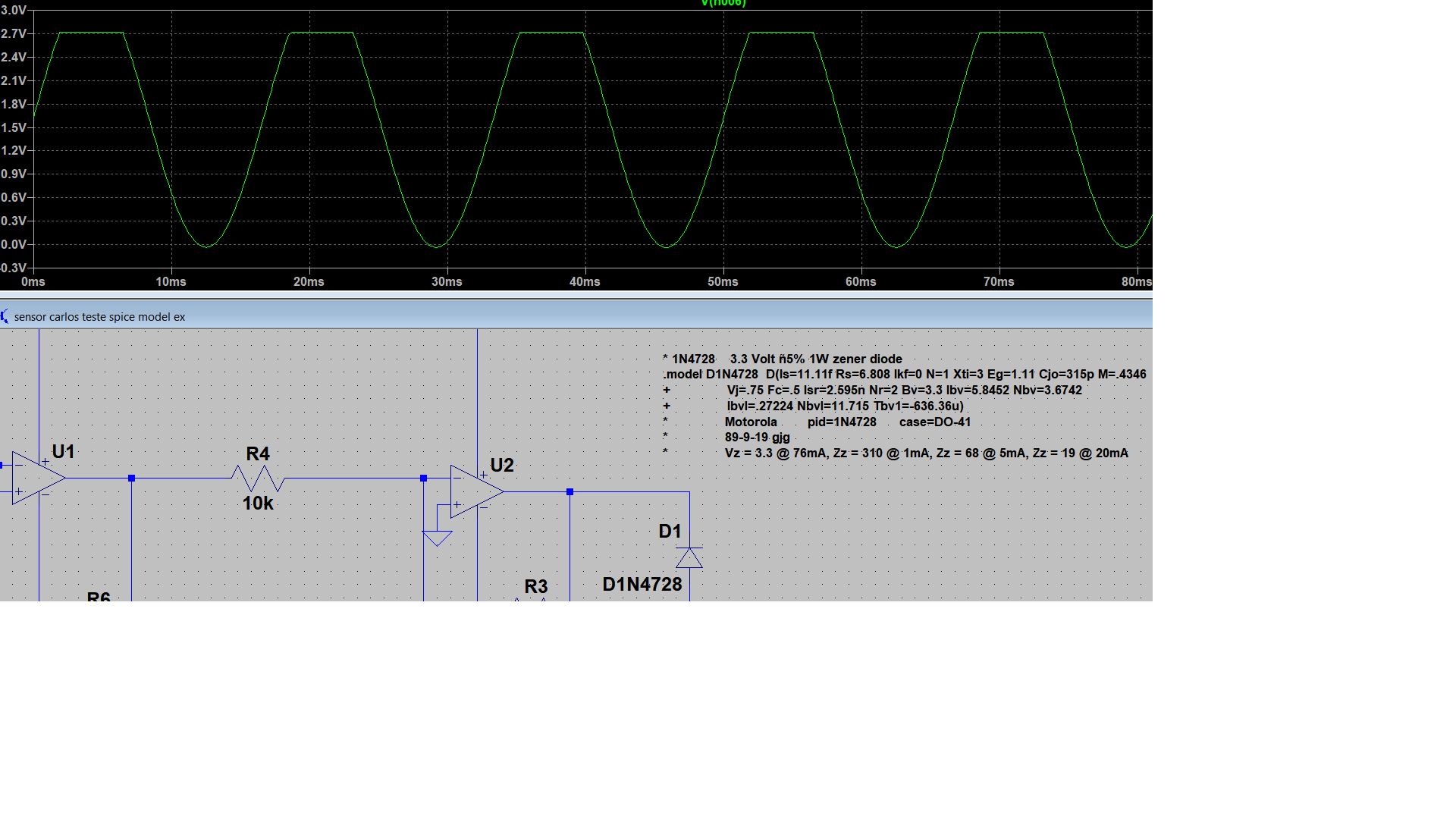 The zener is working under low current(about 24mA) as its main Izt is Izt= 76mA, so I expected to have a voltage less than 3v3 as spice has shown.

Yet, the real question is I don't get the fact the zener is being able to clamp the output voltage without a resistor in series with it. In my understanding the zener should face the whole sinusoidal wave since there's no resistor in series to share the remaining voltage with. I tried that on real circuits with TL082 OpAmp and the same happened. I've also checked the TL082 output resistance and it's about 0.01 Ohm in the 60Hz range(which is the frequency of my signal), so that would for sure not be the trouble.

So, what exactly is going on in this circuit? Shouldn't a zener have a series resistor in order to clamp correctly? 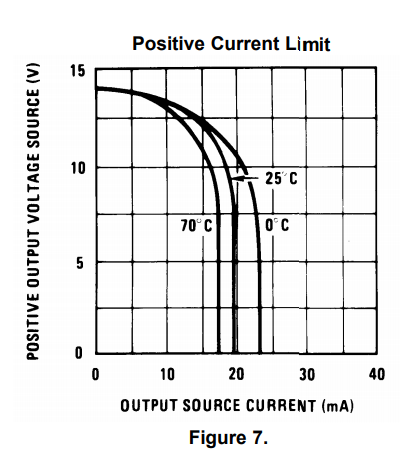 The absolute continuous ratings for the TL082 state that the output short-circuit duration is 'continuous'. This means that there is current limiting built in. The low output impedance you quoted is conditional on the output stage not being overloaded.

Looking at Figure 7 the positive current limit (applicable to your design) is 20 mA but temperature dependent. I would design for 10 mA maximum.

The lesson: you can't take one datasheet parameter in isolation.

There are several things to consider as @Transistor points out and another consideration is this graph - how much output voltage swing you can get for a given load resistance: - 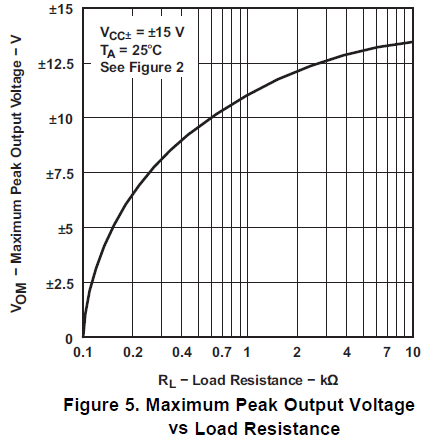 The graph above is an extract from the more modern combined TL081/2/4 data sheet. The earlier TL082 data sheet implies that with a 100 ohm load the output swing is 4 volts p-p but this is somewhat at odds with its output current source/sink graph.

As the zener voltage starts to be exceeded, the load resistance that it produces drops rapidly down to a few tens of ohms so, as per the graph above you would expect the voltage to become clamped at around the zener point. The output impedance assessment in your question I think is based on this: - 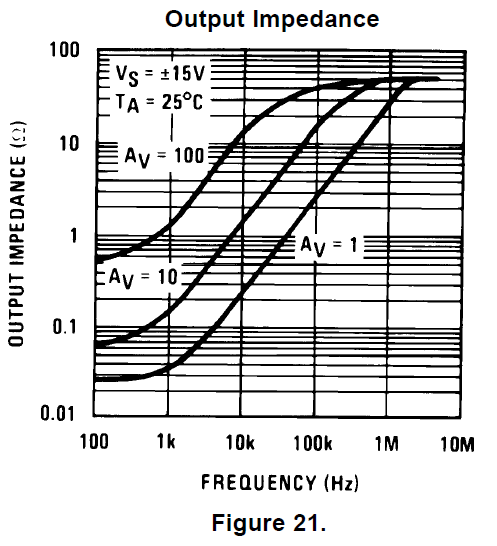 However, this is a "small signal" graph. I know it's not clearly stated that it is for small signals but it's something that you get used to seeing and understanding. It's a calculated graph based on the open-loop gain graph and the amount of gain a particular op-amp may be configured for.

When the output clips due to internal current limit the loop becomes open , gain goes to 0 and Zout=Rs, the value of Vcc/Rs used for current sensing + Rce.

11
Zener diode in series?
6
Purpose of Zener Diode in Circuit
1
Zener diode BZX55C3V3 does not behave as Zener diode
2
Why are resistors used in a Zener clamp circuit?
1
Choosing series resistors for zener diodes
1
Why is the voltage across a Zener diode so dependent on current?
0
Zener resistor configuration
4
3.3v Zener Diode as Clamp not working
1
Series limiting resistor?
1
TVS/Bidirectional Zener for N-MOSFET Gate Protection