I was designing a dual H bridge board which uses some logic signals to drive 8 mosfets. Initially I was using 8 optocouplers per board which was really annoying to wire up. after a bit of searching, I found that I can use 4 channel optocouplers instead (I want to use the CNY74-4H ). I was wondering if I could use one resistor to limit the current for all 4 channel leds, or if I should use 4 separate resistors(one per channel). I know with normal LEDs they can draw unbalanced current, but is it the same case with an optocoupler?

I was wondering if I could use one resistor to limit the current for all 4 channel leds, or if I should use 4 separate resistors(one per channel).

If you used a common resistor to limit current then, when all four LEDs are needed to be driven, the current per LED would reduce to one-quarter of the current when a single LED is being driven. For the sake of adding the extra resistors I wouldn't want to compromise a design given the possible variations in current-transfer-ratio (CTR) between devices within the same package. The data sheet says it can be 50% to 600% (a 12:1 ratio).

Also to consider is the CTR for a typical device as its LED current varies: - 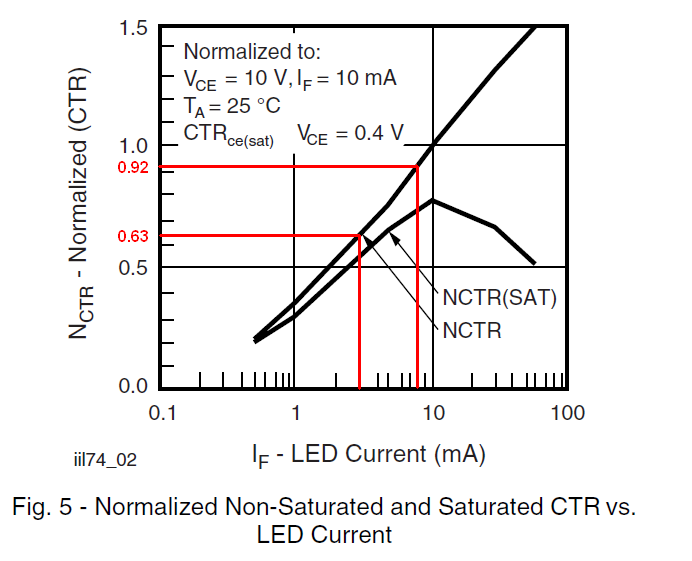 So if you could drive an LED at 8 mA, the typical CTR would mean that the output transistor would conduct with 0.92 x 8 mA i.e. 7.36 mA. At one-quarter drive, the CTR is typically only 0.63 and hence the collector current would be 1.26 mA.

Using a shared resistor could mean a variation in collector current of 1.26 mA to 7.36 mA = 5.8 to 1. Only you can say if your design can cope with this as well as coping with the potential for a 12:1 CTR between respective devices in the same package.

But there is also the consideration that using a shared resistor requires a fairly close match in the forward volt drop per diode. Sometimes this can make the relative range of currents less problematic but sometimes it can make the dispersion worse i.e. one device could disproportionately hog most of the current.

Not the answer you're looking for? Browse other questions tagged led current opto-isolator current-limiting or ask your own question.

3
What's the difference of placing multiple resistors and one resistor for limiting the current of LEDs?

1
When to use or not an optocoupler
1
Multi channel optocoupler
1
Latching/Non-Latching Relay Driver Circuit with darlington optocoupler
0
I/O Module with optocouplers
1
Optocoupler output current selection
1
How to build an opto-isolated analog input without an input-side supply?
3
P channel MOSFET switching problem