EMI Filter calculation in a SMPS 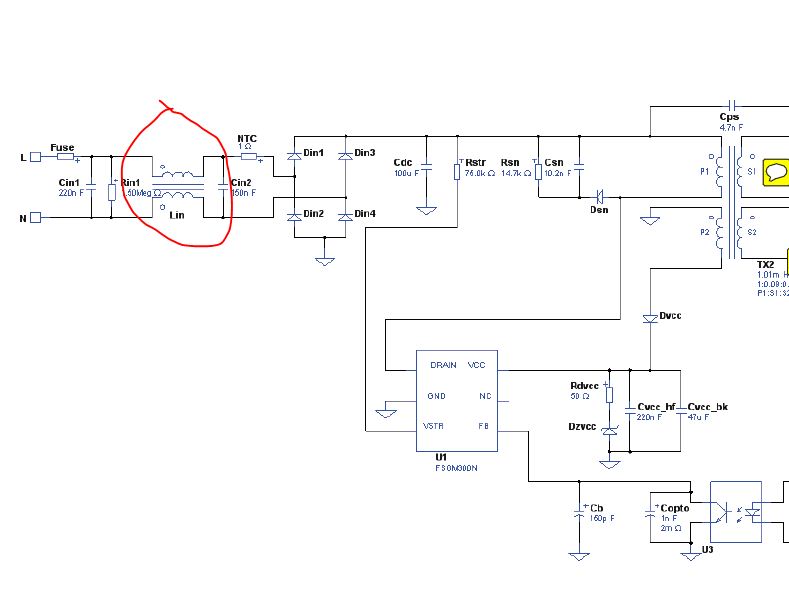 . But all parameters are given, except the value of the EMI filter Lin (red circle in the diagram).I will need to know how to calculate the value of Lin. Looking at the datasheet, the reference design uses 30mH. I do not know if that is a fixed value? This is my first SMPS design.

The value of inductance is typical for a line filter and is non crucial.
The purpose of the filter is to isolate SMPS HF components from the mains.
The inductors form two mirror image coupled Pi-filters (split along the middle horizontal axis for analysis.

A properly implemented filter will often have both differential and common mode filters.
As shown the current design has neither :-(.

I strongly suspect that the diagram has been dawn wrongly - it does not match the diagram in the second version of the data sheet that I added into the question. The 2nd datasheet shows a "Z" symbol on the filter inductor which I take to mean that the dotted ends are on opposing ends of the coil. (See digram below to make sense of this.) The blue "Z" was present but I have coloured it blue. I have added the red ellipse and the dotting which I think is implied. 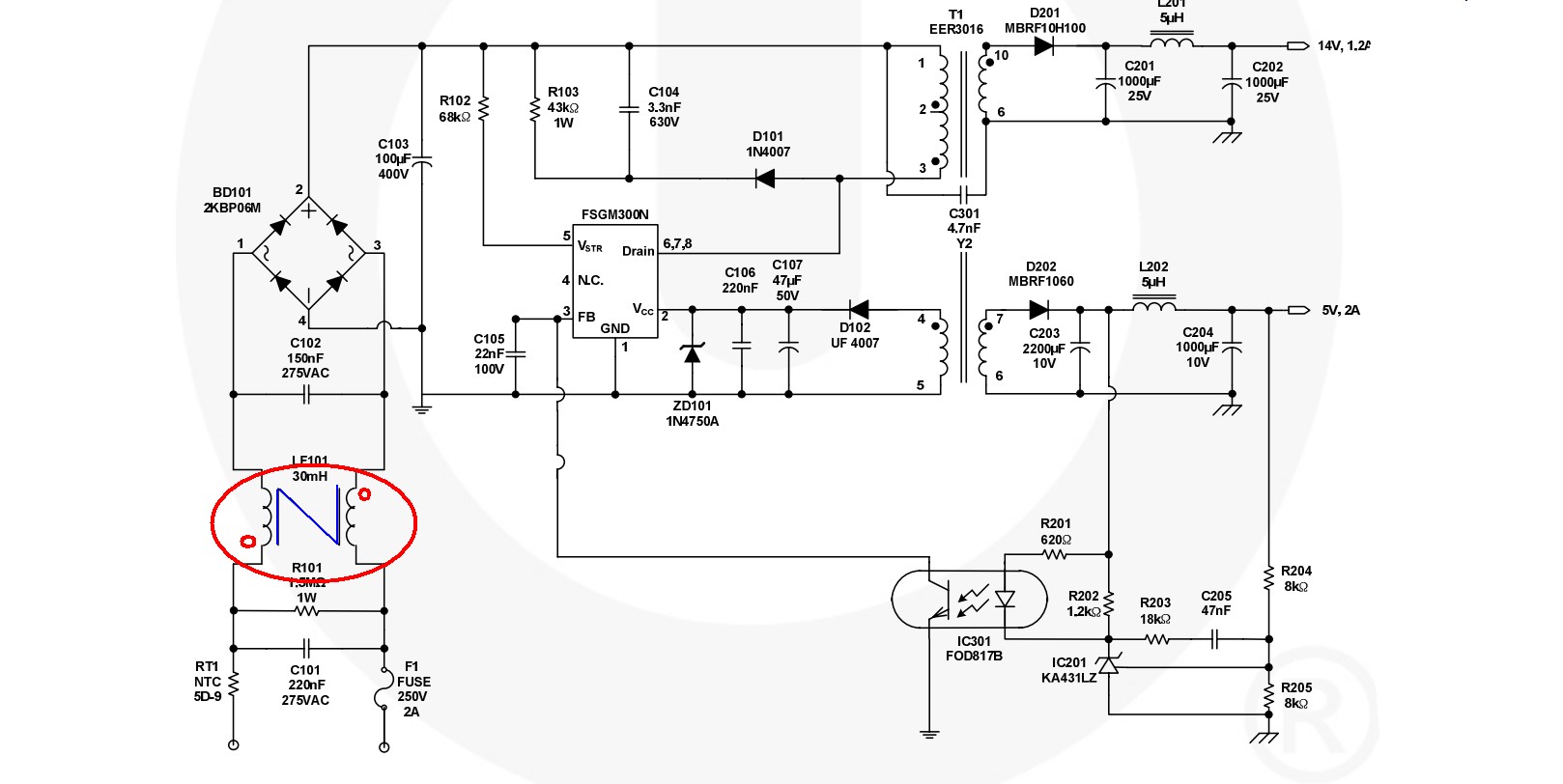 In a common mode filter the "dotting" on each winding will be on the same "side" of the filter - either both on the line side or both on the equipment side. To function properly the filter needs to be followed by a ground referenced capacitor so the cap needs to be split into two caps with a griunded centre tap. See left hand part of diagram below.

A differential mode filter has dottings on opposite side of the filter and the associated capacitor need not be centre tapped and grounded. See right hand part of diagram below.

The filter as shown in the supplied circuit has common mode dotting but differential mode capacitor connections - ie no centre tapped caps.
It will work far less well than it would if Cin1 was two caps in series with the centre grounded OR if two more caps were added in series across Cin1 with their centre point grounded. Image from here. 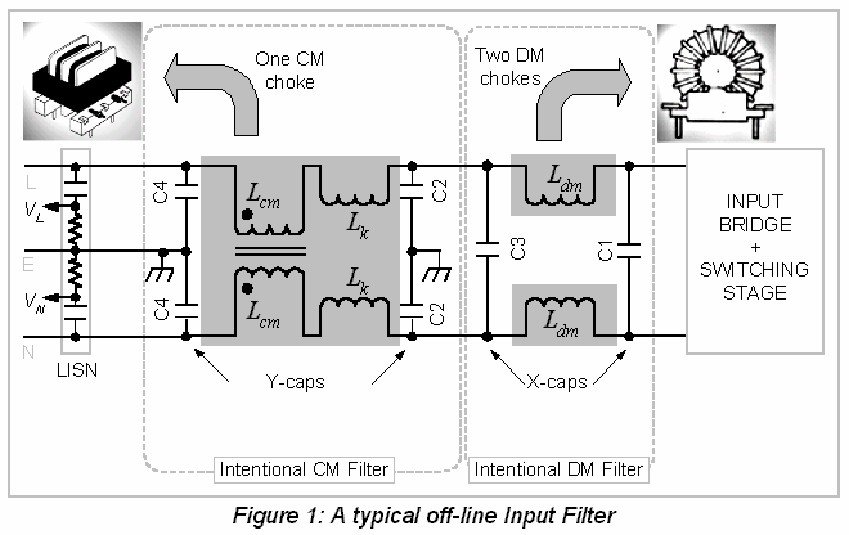 A internet search for "line filter" will turn up many examples.

Related material - each linked to a page.

FSGM data sheet as a JPG !

It can be very difficult to calculate EMI filter values, since EMI is more dependent on the circuit's physical layout than the topology itself. The parasitic elements related to component spacing, shielding, pickup, coupling, etc. will outnumber the amount of actual parts. Often a more empirical approach is needed.

The EMI solution cannot be analytically 'proven' as good either. You need to take measurements with a proper spectrum analyzer and LISN (line impedance stabilization network) under multiple conditions and prove empirically that the complete product meets emission standards.

Your converter will generate EMI at it's switching frequency and at harmonic multiples of that frequency. If you have other switching elements in the circuit, you may also see sum and difference frequencies. The ultrafast rectifier diodes will generate high-frequency noise (usually up into the megahertz) due to their speed.

Obviously, the EMI inductor has to carry the line current. In the common-mode configuration, the input current will cancel out so you don't have to worry about it saturating, but the wire should be thick enough to carry the current without \$ I^2R \$ losses.

As Russell was saying, a proper common-mode filter will combine a common-mode inductor (phase dots on the same ends) with some Y-capacitors (a cap from each winding to protective earth). The capacitors used for this function MUST be safety-approved for Y applications. Your design should include at least one set of Y-capacitors.

As a starting point, you should ensure that your filter has lots of attenuation at the main switching frequency of the converter, since this is often the strongest EMI source in the power supply.

For a common-mode inductor, this is generally achieved by having the inductance as high as possible, to ensure the highest inductive reactance at the switching frequency. This usually implies high-permeability ferrite material, to achieve the inductance without needing many turns. Toroidal cores are often used as they easily allow the line-side and neutral-side windings to symmetrically fit on the core, usually with an insulating spacer between the windings.

X- and Y-capacitors are a little easier - their datasheets will have characteristic curves that show their attenuation as a function of frequency.

Once you settle on your capacitors and inductors, it's time to start measuring, tweaking, remeasuring, retweaking...

Not the answer you're looking for? Browse other questions tagged power-supply filter switch-mode-power-supply emc or ask your own question.