I recently bought several SMPS buck converter supplies for a project. They all had about the same specs, typically 90-270VAC input, 12VDC output. Having an expected worst case continuous load of about 200mA, I selected devices with output ratings of between 300mA and 500mA. Also, since my circuit employs a fairly large capacitor (2700uF), I was careful to select units claiming to be short-circuit tolerant, specifically stating "output returns to normal when short condition stops".

Well the results were a really dismal eye-opener except for one company! Surprisingly, the best device I tested was made by a China based company (SANMIC) and was only rated 300mA. Yet it took on the load, capacitor and all, like a champ. Unfortunately that was NOT the case for at least 4 other boards made by other companies with similar specs. These would basically oscillate slowly (maybe 5hZ) attempting to drive the load, but would never actually start. The diagram and graph I'm posting is admittedly a crappy image made with a paint program, but it fairly accurately depicts what I'm seeing in all but one of these supplies.

So other than the obvious answer of "buy better supplies", I'm hopping to understand (1) Why its so hard for these supplies to "bring up" a capacitive load to rated voltage, and (2) what key features should I look for to get a better (and RELIABLY better!) result. Obviously "short circuit tolerant" has proven to often be false. I can't simply choose an arbitrary higher current rating, since a capacitor at time=0 will always seem to demand infinite current. Obviously some companies know how to do it, but I'd never be able to tell them apart by the specs! 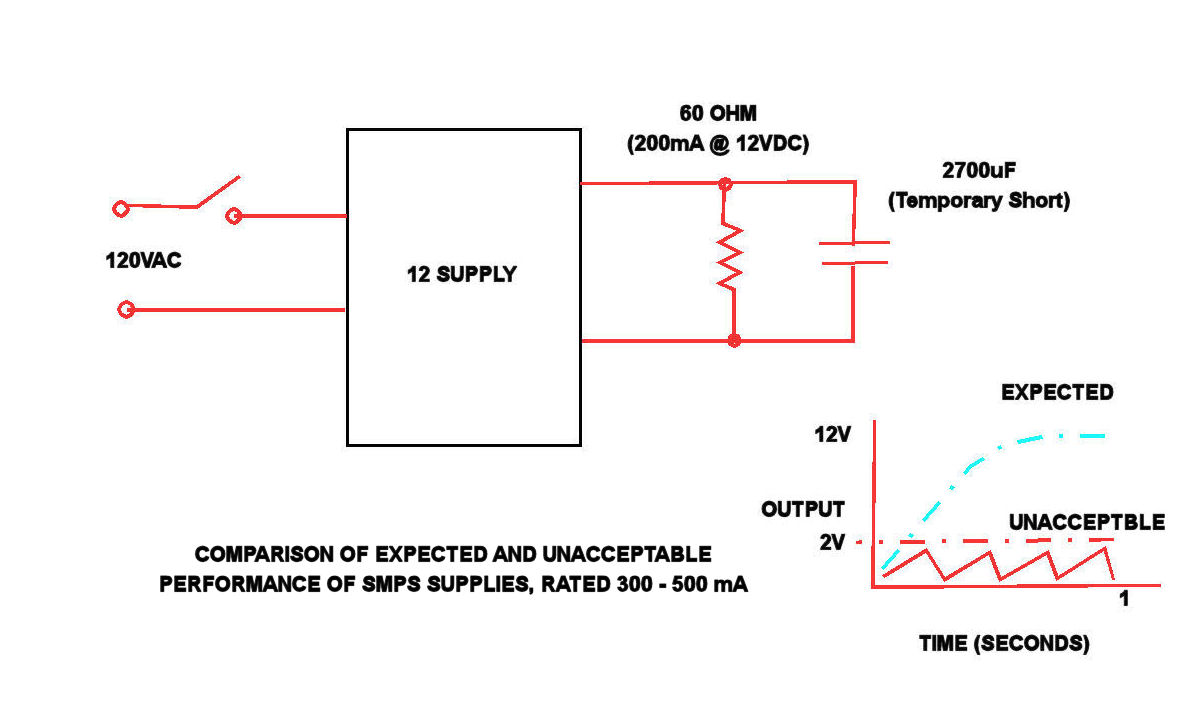 By the way, its irrelevant to the question, but the reason for the capacitor is because an MCU, upon detecting the power "going away", needs to do several things including opening relays in an specific sequence and saving all its program states to NV ram. The 2700 uF gives me about a second to do that.

You've identified the problem fairly accurately, for capacitative load the instantaneous current requirements are quite large.

SMPS Vendors often include a variety of features, namely

Sometimes these features may interact with each other.

Soft-start and inrush limiting are intended to mitigate the startup characteristics of a capacitative load.

Short circuit detection protects the supply due to accidental short and typically attempts to restart the supply as soon as the short is removed. But it has negative performance implications during a large inrush on start.

Note: It is hard to say if the worse performing supply is actually a "worse" product, in principle you are simply exceeding its specification, if the supplies are nominally the same specification and you are exceeding both of them, it is probable that the one that allows the large in-rush will function but fail prematurely. Or it may have a slower soft-start and does not trigger the short circuit detection, meaning it is a better design for your purposes.

The ones with adjustable current sensing limits will be more inherently stable.

After all a voltage source into a cap with near zero ESR relative to Vout/Iout=Zout min.

There are many methods of switched mode power regulation and low impedance voltage feedback only is sure to cause stability issues. They must combine current feedback in linear mode with Voltage feedback to be potentially stable. To simply have OCP is not enough.

Not the answer you're looking for? Browse other questions tagged switch-mode-power-supply load capacitive or ask your own question.

2
How to drive and control capacitive load?
0
Capacitive load at the output for analysis of CMOS cells
2
Given a load, how do you calculate whether it is capacitive or inductive?
2
Understanding SMPS with UC3845
0
Step up SMPS with unrealistic voltage output with a 100W LED COB load
1
Stability - Driving a Capacitive Load