How to mix High-Z and Low-Z audio signals? (Sum should be High-Z)

I'm trying to inject additional sound into a phone call. Therefore i modified a basic cable headset to use audio from my iPod.

This is my current prototype circuit: 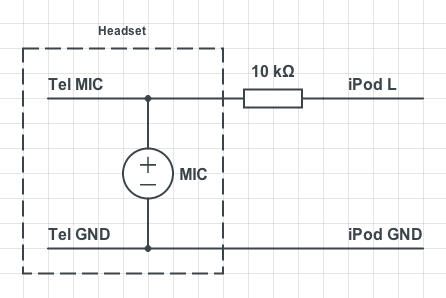 That circuit is already working, but has some disadvantages due to the very basic passive mixing. When i turn up the iPod's volume it get louder and louder, but it also starts to decrease the mic volume.

Basically I'd like to be able to increase the iPod's volume without affecting the microphone level.

I think it has something to do with the iPod being a low impedance device (around 32Ω i think) and the electret mic being a high-Z device (around 1.5 k – 10 kΩ). Maybe there's also a problem with the power? The mic will only produce several millivolts, where as the iPod can supply more than 1 volts?

How could i improve my circuit, but still keet the headset recognized as a high impedance device. (if it's low-Z, the phone won't detect it properly).

Thanks in advance & bye! Hans

You could do something like this if you're not afraid of op amps. The microphone gets its high impedance, and if it needs higher impedance, increase R1. I have the iPod a 330 Ohm load because I seem to remember reading somewhere that's a good starting point. The output impedance is 10k, and can be increased if necessary. This circuit has a gain of 2, so if you need less, decrease R6, and if you need less than 1, switch it to an inverting configuration. Trying to sum these inputs passively is going to require a matching network. 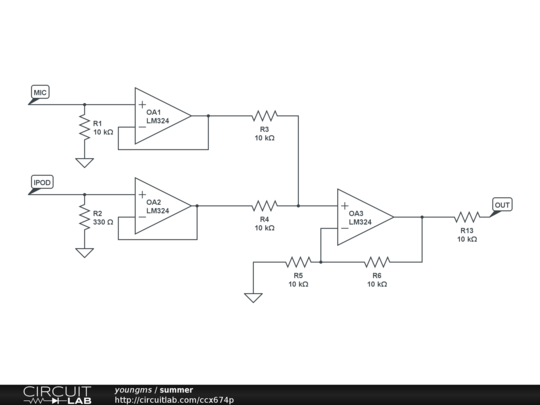 Not the answer you're looking for? Browse other questions tagged impedance microphone telephone or ask your own question.

9
Designing a cable for bidirectional communication between 2 iphones via TRRS (headphone jack)
14
Digital data coming out of a cell phone headset mic?
1
Audio hack: replacing electret mic with phone audio output
2
Line Level to Mic Pad Working Randomly With Phones
1
Pre-amplifying an electret mic already in use
5
Phantom Power supply for Electret mic
0
Linking Android phone to motorcycle helmet comm set
4
Device to loopback mic to headphones
0
Filters generate output even if they are not connected to any signal and does respond differently to different signal sources
1
Data noise in bluetooth headset when coupled to an analog(ue) audio mixer via signal transformer