This is my programmer circuit: 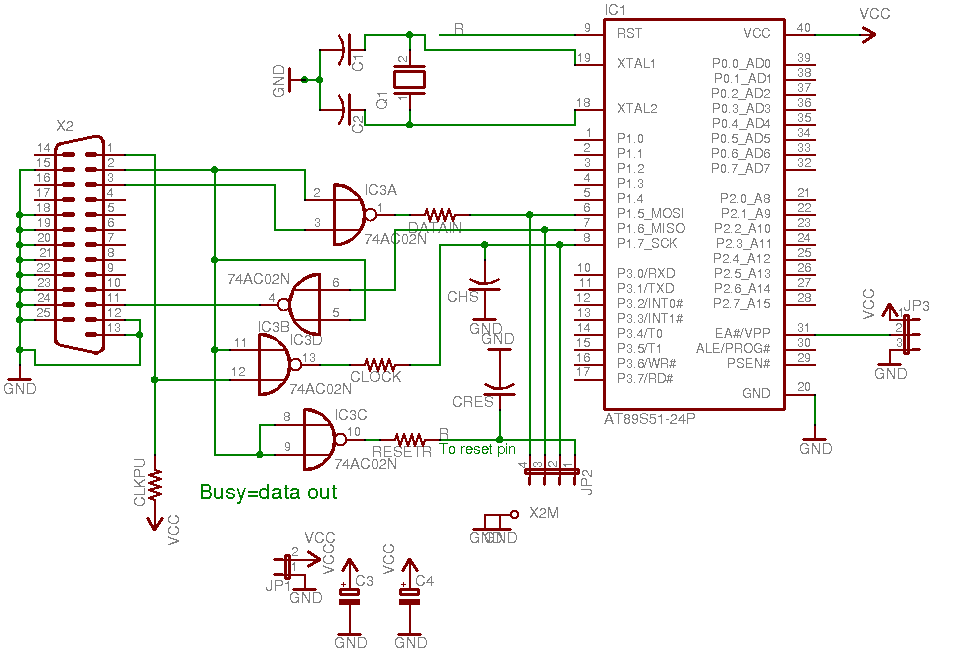 I decided to try the HCT version of the nor gate (74HCT02) and I also decided to omit the capacitor to the reset. I selected 10K for all resistors except for reset, I used a 220 ohm resistor.

I did a very basic reset test on two different computers each with a parallel port.

Computer 1 is an old IBM pentium 4 with a built-in parallel port. I ran tests in Qbasic for DOS from a boot CD with no other drivers loaded.

Now Computer 2 is linux with only the basic parallel port driver loaded and with ACPI extensions disabled but the tests are awful. Here's the results:

Whats weird is that neither parallel port is damaged and I always run circuit tests on computer 1 before I use the circuit in computer 2.

So then I thought use 10K pull-up resistors on the data input lines, but that made no difference at all.

Is there some modification I can perform in my circuit to make it work with ALL parallel ports instead of only certain ones?

I also tried disabling the parallel port drivers in linux one-by-one to see if I get more favorable results and I couldn't.

And yes I have tested the reset line on my circuit with a voltmeter when I ran the tests and that part responded normally.

I'm not entirely sure, but i think i've come across a similar situation once: The status byte of the parallel port always reading the same even after changing electrical inputs at the port. What i did then was to select, in the PC's BIOS setup, an option for the parallel port OTHER than 'standard'; i believe i chose ECP. After that (and no other change), it started working and reporting values as expected. Since you say you explicitly selected the standard mode for the port, you may want to try that.

Not the answer you're looking for? Browse other questions tagged circuit-analysis resistors parallel-port or ask your own question.

0
How to do a loopback test of a parallel port?
0
Drain Li-Ion battery by connecting USB +5V and GND
0
Why is the Voltage only 1.4 for reset input when in high impedance?
0
All possible parallel port IO addresses
0
How A/C board works on an air conditioner
1
Why not use the same size resistors for each stage in a Kelvin-Varley divider?
0
Motor "load" for 8051 does not change based on 8051 GPIO pin
2
Building DIY TrackIR, need wiring help