I'm afraid I have a rudimentary stupid question but here it goes...I have a circuit which produces a signal through a series of NOR gates. That signal, I input in a 2n2222 BJT to drive an LED. When I do so, the voltage of the gate drops to below 1V indicating a current leak. When I disconnect the BJT the voltage of the gate is 5V. I'm afraid there's something I'm missing about these guys, any help?

Here's the part of the circuit that's giving me problems: 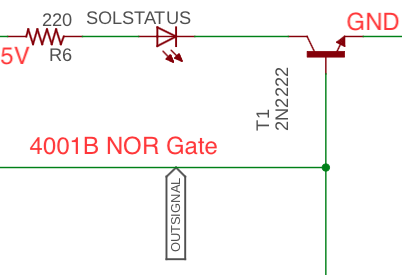 PS: In the same manner, if I connect an IRLZ44N MOSFET, I have no problem. So what's the obvious thing I'm missing here? haha

The base of a BJT looks like a diode to the driving circuit. It is expected that the voltage would be low. If you put a resistor in series with the base, the NOR output should remain in its normal high state while still allowing enough current to turn on the LED.

Not the answer you're looking for? Browse other questions tagged operational-amplifier mosfet bjt or ask your own question.

0
Unusual voltage drop at BJT (2N2222)
4
Push-pull switch mode power supply using an attiny84
0
powering op amp current
2
Multiple MOSFET based AC switching circuits on the same supply
0
Need help with troubleshooting an H bridge circuit
2
Switching a 3v motor with a MOSFET using a 3.3v signal
2
Is there a difference between specialized audio amplifier and general op-amp silicon?
0
How to increase output voltage of an op amp well above the supply voltage