I'm building an LED lighting system that requires around 16 connections to an Arduino (15 LED power supplies plus a common ground line), and I want to clean up the cabling. It's important for my application that the connector at the ends of any cabling be small and neat.

Essentially I would love to use a USB C cable – without any of the internal chips/resistors – simply to carry 19 identical general purpose wires. Then I could use standard USB C breakout boards at each end of the cable, and use the USB C cable as a simple wire conduit with nice connectors.

For all my searching, I can't find anything like this...

Does something like this exist? Is there an obvious solution to this problem that I am failing to see? Perhaps a different type of common connector that I'm not thinking of?

By coincidence, HDMI does have exactly nineteen conductors.

But: three of them are shields, some are differential pairs, which are optimized for high-frequency signals instead of low-frequency current transport… I doubt a single one of them was designed to carry current for a 20 mA LED, leave alone a "power LED" (whatever that is).

In short: all these modern computer cables are specialty devices and you can't expect them to just be "a bunch of wires".

So, stick with something else. SUB-D connectors are pretty standard, and they are easy to deal with with hand tools; of course, they are a lot larger. But you might need that anyway, because "power LED" kind of says each conductor might carry 1 A or more, and that's not going to be fun with smaller connectors...

If you asked me, this sounds like an architectural thing: Instead of buying (expensively) copper to bridge a large distance with a lot of current (losing power to wire resistance), you should probably have your (or another) Arduino where you'd have the other end of that cable you're wishing for, and just run a data line and power there.

In fact, there's really easy ways to switch a lot of outputs with few cables:

For example, there's linear shift registers with a latch input; there's even some that come with integrated linear LED drivers with adjustable current. With these, you'd only have to run 5 signals

That sounds a lot easier and less error-prone then having 19 conductors! Also, you're not limited to 15 LEDs that way. You can have as many as you want.

The standard "full-featured" USB 3.0 cable has 18 conductors 15 conductors, optionally 3 more, and one shield. It is defined in Type-C Specification, see Table 3-6 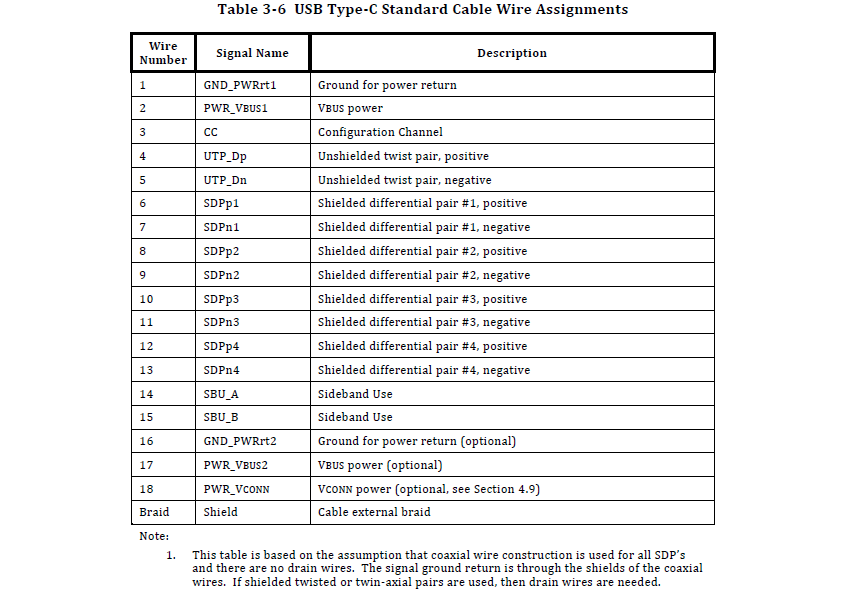 See also the footnote. The wires are not "identical general purpose wires", some are either coaxial, or twisted in pairs.

Also it is important to remember that if the cable is implemented as twisted pairs (the majority are), simple use of wires for digital signaling purposes might result in huge cross-talk.

More, some signal in cables might be using skinny AWG34 wires, see Table 3-8, so one needs to consider substantial wire impedance and limited ampacity.

Even more, expect that CC wire will have some IC attached (called "electronic marker"), and powered via Vconn wire. According to Type-C specifications, ALL full-featured cables must have electronic markers.

Ironically, if your combined LED current is under 1A then good ol' USB 2.0 cable can work for you. Just don't use high speed clock, twisted pair has a lot of crosstalk.

For higher current simply use any suitable cable and just about any of thousands available connectors, like DIN for example.

The latency issue is because I might want to cycle each LED independently on/off at 1kHz (e.g. LED #1 on for 5ms, off, repeat at 1kHz)

As it happens, you misunderstand how these chips work. You don't need to generate PWM by yourself, you simply send commands that set individual LED brightness, and the chip generates PWM for you (at 97 kHz, or about 100 times faster than you were planning).

The whole point of this answer is that you don't have to control LEDs yourself, you use digital communication over few wires and tell the chip what to do. At 100 kHz clock speed you can change the brightness of all 15 LEDs about 700 times per second, or about 20 times faster than human can perceive.

Don't you think this info belongs to the question? And how were you going to use Type C cable (as in the title) if most of the wires in it are AWG34, with maximum rated current only 180 mA? Do you realize that with 1A per LED your ground wire will carry over 15A!

Anyway, in this case you still have multiple options available.

The bottom line is: send control signal and provide power to your LED system, do the actual PWM switching by small circuit in the system itself.

BTW, with only 4-5 wires you probably don't even need "small and neat" connector on LED side, you can solder that end of the cable directly to PCB.

Not the answer you're looking for? Browse other questions tagged usb connector wiring or ask your own question.

2
3.5mm type custom USB connector
0
USB 3.0 RX and TX Lines
0
Can I use a USB connector/plug for RGB Led Strip
3
Possibility to use SIL connector for USB
2
How to jumper differential pair wires for USB 3.0 Superspeed?
1
How can I make this USB-C connector as a host?