How should I understand the intrinsic body diode inside a MOSFET?

I know there is an intrinsic body diode inside all the MOSFETs, but I'm confused about the reason why it's there. I've searched the articles but can't find a good explanation for it. Can anyone use the "normal" NMOS structure (when I say normal, I mean the standard structure, two n+ doped are source and drain, and the gate is in the center to create the N channel, not the U-type or something else.....) and show where the body diode is? Thanks a lot!

The intrinsic body diode is the p-n junction between the body and the drain. In a discrete (standalone) MOSFET, the source and body are usually tied together for convenience to make a three-pin package. This means there's a diode between the source and drain: 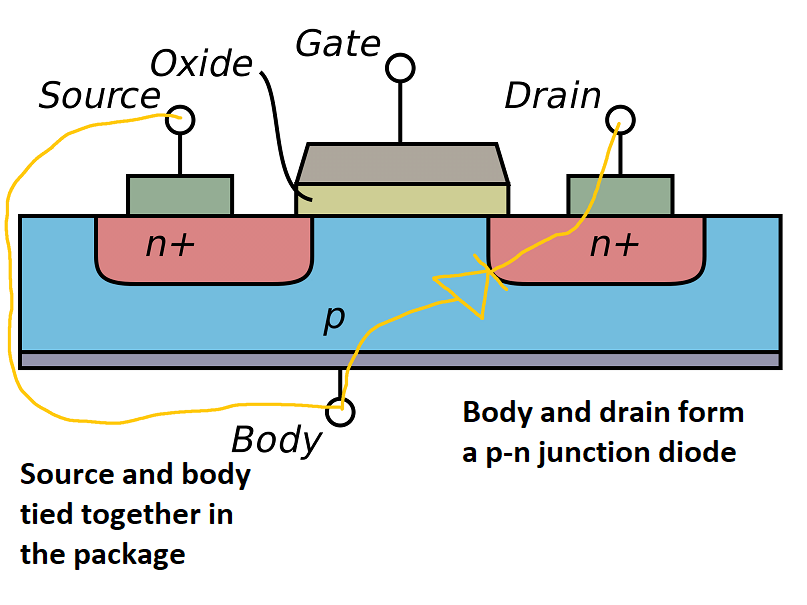 If the source voltage is always lower than the drain voltage, the diode stays off, and everything works as expected. This means you can't (easily) use a MOSFET for switching a bidirectional signal. Discrete MOSFETs are almost always used for low-side switching, so this limitation isn't a big deal in practice.

You can see that the source and body are tied together in the standard schematic symbols for three-terminal MOSFETs. 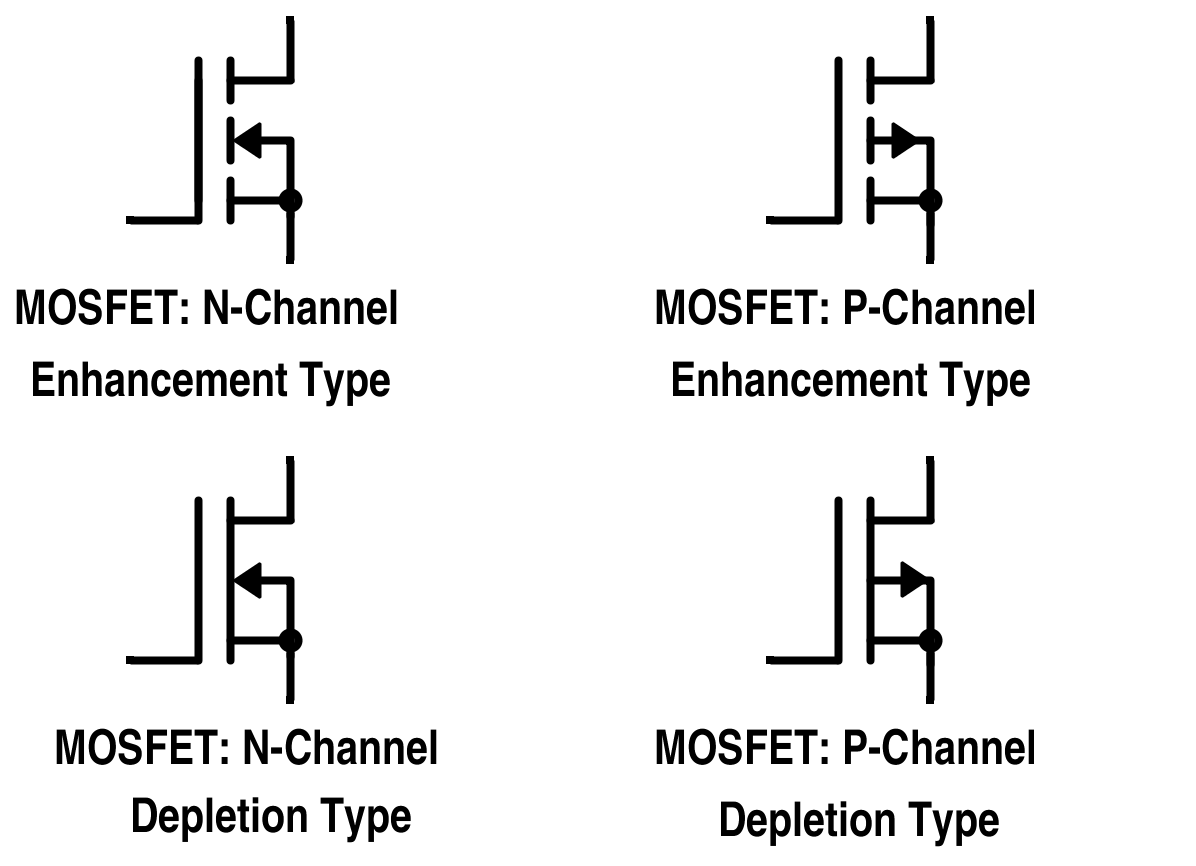 There are two main ways of constructing mosfets:

The first is this more planar method where existing silicon is doped and the gate oxide is grown (image from wikipedia):

This is a very easy structure to make and forms the backbone of most digital logic inside integrated circuits today. As you noted, there is nothing that looks like a diode here and in fact: There isn't one on each mosfet. (There is usually something of a diode between the substrate and the drains of the MOSFETs on the wafer due to how CMOS is created with both N and P channel MOSFETs on a single die, but I wouldn't refer to that as the "body diode" of a single mosfet.)

So, no body diode. Why do we see body diodes talked about so much then? It is because discrete mosfets are usually constructed with the following structure (image from wikipedia): 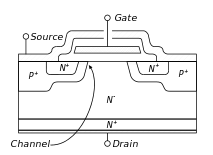 There are several attractive advantages of this type of MOSFET structure:

There are some downsides, however:

The body diode does come in handy when using this type of mosfet for power applications with inductive loads (since the reverse spike can just flow backwards over the MOSFET), but if you are explicitly using it for that application people will often just stick a schottky across the mosfet as well since the backwards pulse across the mosfet's not-that-great body diode can cause unwanted heating (high voltage drop = more dissipated power).

The body diode is between the substrate (bulk/back of the chip) and the drain/source/channel as a whole. For the FET to function correctly, it must be non-conducting. This is usually achieved by connecting it with the source contact.

Not the answer you're looking for? Browse other questions tagged mosfet diodes semiconductors body-diode or ask your own question.

1
Two directional FET switch. Is it possible?
2
How is current flowing through this P-Channel Mosfet?
0
back gate effect in low volatge circuits
0
p36nfo69 substrate pin

1
MOSFET source to drain Current
1
Body Diode of a MOSFET
2
In MOSFETs why is the gate-body inversion layer voltage able to create a conducting channel, yet the same source-drain voltage not?
2
Turning an NMOS with substrate terminal into a PMOS
0
How can a grounded gate MOSFET conduct current?
1
Donor concentrations between the Gate and Drain
1
MOSFET - shorting the gate and source
0
Working of NMOS as a capacitor
0
MOSFET body diode and inductive load