Why overflows are omitted in the non-restoring hardware binary division algorithm?

I'm reading a book about a non-restoring binary division algorithm, for example 52_octal divided by 41_octal:

Why won't this cause an error? I follow this algorithm and it gives right answer...

Since you indicate that you aren't familiar with non-restoring division, then consider the following discussion about multiplication to set a mental context for what follows:

(In the above MAC operation, the multiplication product becomes the augend for the following addition, with the small offset being the addend.)

Now, to compose a division operation that may reverse the above MAC operation, you start with a dividend that is \$N+M\$ bits wide. (Since this is the width of the above MAC result.) You also then consider a divisor that is \$M\$ (or \$N\$) bits wide to parallel the concept of the earlier multiplier (or multiplicand.) The quotient is then \$N\$ (or \$M\$) bits in width to parallel the concept of the earlier multiplicand (or multiplier.) The remainder will, of course, be \$M\$ (or \$N\$) bits wide.

I think you should be able to see why the above paragraph is a correct reversal of the MAC operation. If you set things up where the dividend is the original MAC result and the divisor is taken as the original multiplier, then the quotient recovers the multiplicand and the remainder recovers the addend.

By now, you should realize that you must start out with a dividend that is twice the word width. And to avoid overflowing the quotient, you must be sure that the upper word of the dividend is smaller than the divisor. (If it isn't smaller, then the resulting quotient will be too large to fit.)

Symmetry of Your Example

In your case, let's start out by looking at the original MAC operation required to get your starting values:

All the pieces are still there; just in a different format now. I think you should be able to see the symmetry.

Here are a couple of initial tests you'd need to make:

The above test-pair are required to avoid garbage and are performed prior to following the general algorithm.

The basic idea is that you start out generating the higher-order bits of the result, first, eventually generating the lowest-order bit at the very end of the process. So the subtraction (or addition) you perform starts with the high word of the double-word dividend pair. That's why the subtraction (or addition) you see takes place on what will eventually become the remainder and not on what will eventually become the quotient. After shifting (or rotating) through \$N\$ bits, the original dividend will be split up so that the remainder will be in the upper word and the quotient will be in the lower word. (The quotient is being manufactured one bit at a time in the lower word.)

Implementation, of course, is a little more complicated and will depend on whether or not this is being done in hardware or in software. Here's a sample diagram of how it might be implemented in hardware (this is EESE, after all): 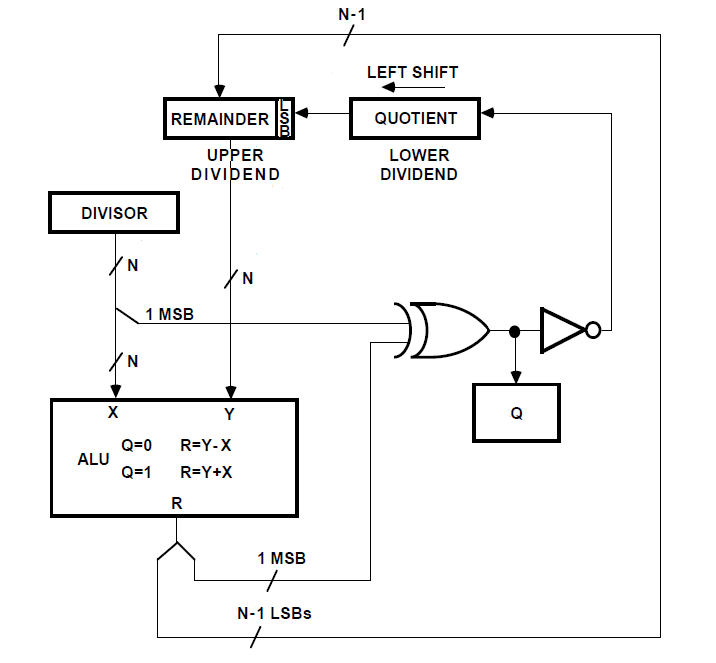 A software implementation can take a variety of forms (since it depends intimately upon the language and operators available to the programmer.) But here is one possible example that is semi-close to what you wrote: 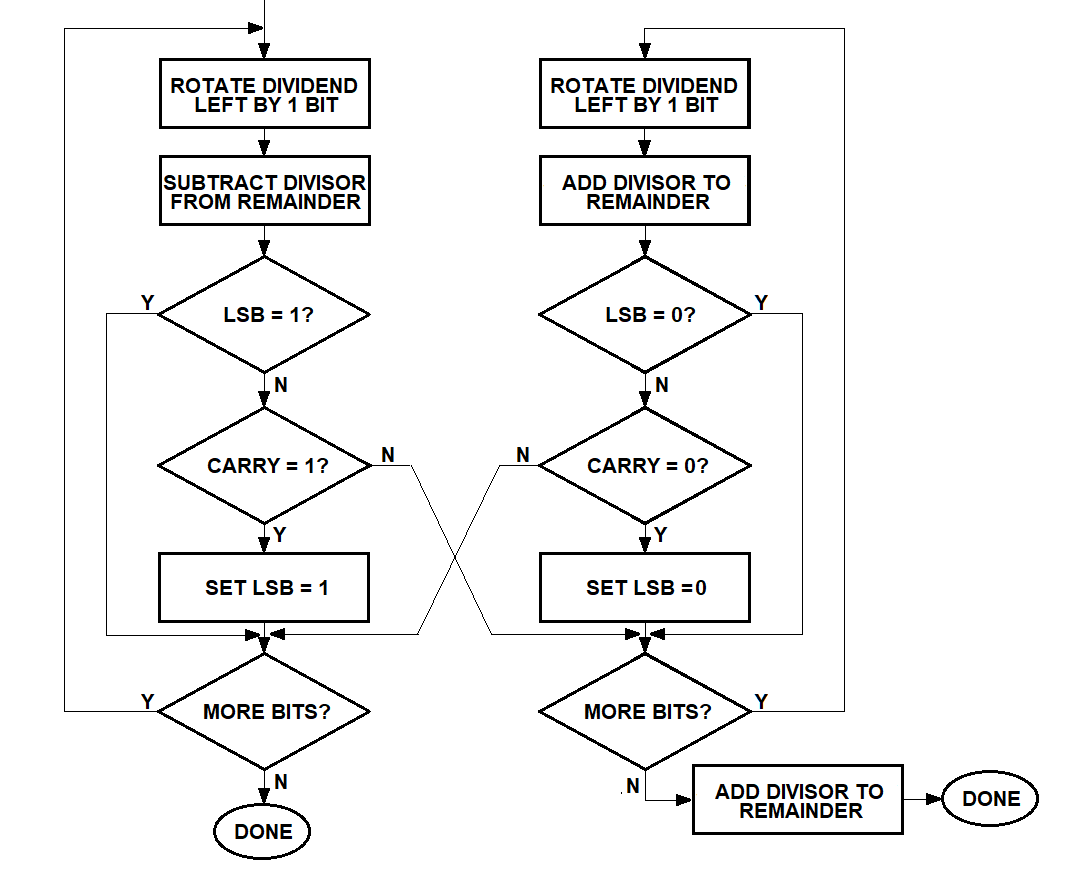 First off, the above diagram illustrates what is called a co-routine by programmers. There are two distinct looping activities, one shown left and one shown right, which occasionally transition between each other. You can see that the exiting case for the right side is a little bit different than the exiting case on the left. This is to perform a final adjustment on the remainder, depending on which loop was active at the time.

When I write rotate dividend I mean both machine words; both remainder and quotient, which make up the entire dividend to start. But note that the subtraction or addition takes place only with one word; the remainder.

The LSB refers to the least significant bit of the entire dividend, which is the same thing as the LSB of the quotient. (It's up to you how you want to imagine. It's the same, either way.)

The CARRY, as shown, means the carry bit that results from either the subtraction or the addition. For the subtraction case, I mean the usual ALU meaning where a subtraction is actually performed by first inverting all the bits of the subtrahend and then adding that, plus 1, to the minuend. (In subtraction, having the carry equal to 1 means that there was no borrow.)

Finally, if you are bothered by the details of the above implementation examples -- notably, that \$D\$ (the divisor) is subtracted from what seems to be the high-order word of the double-word dividend (the word that will eventually become your remainder) -- then just remember what I said, earlier: the method starts "...out generating the higher-order bits of the result, first..." If you think closely about this detail, I think it will make a lot more sense.

Looking at your example, I see that in step 6 you appear to magically insert a "1" bit over on the very right-most side of your final value. This is correct. But you didn't explain how it arrived there in your terse description. The above examples I've provided above discuss the details about how and why that bit arrives.

Not the answer you're looking for? Browse other questions tagged hardware algorithm arithmetic-division or ask your own question.

2
Why does a divider needs 1 more step?

3
hardware implementation of division algorithm
0
In logic levels, why are both the driver and receiver needed?
1
SRT division vs Non restoring division
43
Why does hardware division take much longer than multiplication?
1
Why are there 2 clock rates (core vs memory clock) in the GPU?
0
Why are hardware inverters so prevalent?
2
Why are most of the RESET signals in embedded systems active low?
0
What is the fastest (in clock cycles) 16-bit x 16-bit unsigned integer division algorithm that will run on an ATMEGA1284?
0
Binary division restoring method