Application: I have a copper mesh (10cm x 10cm square) in a vacuum chamber connected to a BNC connector by a 24-cm-long copper wire. The goal is to switch the mesh voltage (referenced to ground) from 8 V to ~0 V quickly. (This will switch the electric field in the chamber, which is a control mechanism for our atomic physics experiments.) It is essential that roughly 500 ns after the switching starts, the signal settles to <10 mV (~<0.1%). The mesh is floating; it is not terminated in the chamber.

Problem: There is a "hump" at the bottom of my inverted square pulse. I need to flatten it.

Circuit: I have settled on a simple MOSFET switching circuit:

Description: The MOSFET (ZVN2110A-ND, N-Channel Enhancement Mode) is driven by a IRS2117PBF-ND driver, which outputs a 15 V positive pulse. The baseline of this trigger pulse floats on V_S, which is tied to V_LO by a small resistor. The mesh is connected to Point B. The output low-pass filter was an attempt at fixing the problem. All resistor values were determined experimentally (i.e. by initially using potentiometers). The result was hard-wired using a "dead-bug" style on a copper-clad board. 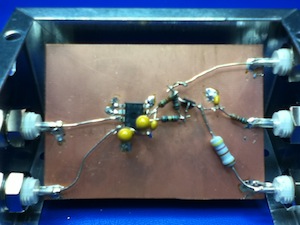 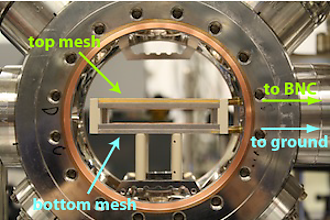 Probe Details: To simulate the mesh, I soldered a 24 cm wire to a piece of copper-clad perf board and connected it to the circuit output (Point B). I probed the signal on the perf board with a Tektronix probe (500 MHz, 8.0 pF, 10MOhm, 10x) into a Tektronix scope (TDS3012 100 MHz digital scope).

Observations: It switches quickly enough (although I could speed it up by removing the filter), the ringing amplitude and duration is tolerable, but on the (essential) microsecond time-scale, there is a large "hump" and droop/sag of 20 mV (labeled in image by red line). This is unacceptably large and makes it impossible to do our experiments, which take place from the moment of switching until about 10 microseconds after switching. 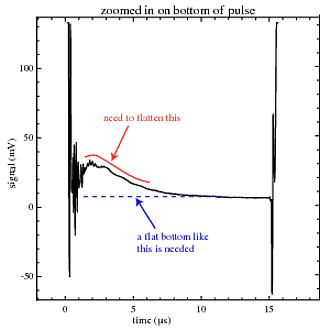 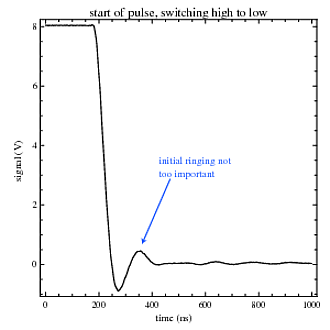 Details of Application: We use electric fields to tune atomic resonances in our experiments. Scanning the electric field applied to the atoms lets us record a "spectrum" of these resonances showing their location and shape. The widths and separations of these resonances are on order of 1-10 mV/cm (very small!). To apply the electric field, we place the atoms between two flat copper pieces of mesh, separated by 1 cm. The E-field between the copper mesh pieces is just the potential difference between the mesh pieces (1 V difference equals 1 V/cm E-field, a 1-to-1 conversion). In collecting a spectrum, we sample an E-field value by switching to the corresponding voltage and waiting a few microseconds before detection. If the voltage (and thus the E-field) drifts during the sampling period more than the size of the resonances (<10 mV) the resolution is degraded to the point where our spectrum picture becomes blurred beyond recognition.

Additional Thoughts: I have considered the possibility that the MOSFET is heating up, thereby changing its on-resistance (normally ~4 Ohms). To test for this, I tried two things: (1) placing two MOSFETs in parallel, and (2) replacing the ZVN2110A with a IRF1010EZ MOSFET that has a much lower on-resistance (100 mOhm). Neither things helped, the "hump" is still 20 mV and still lasts a few microseconds. It seems to me that increasing the pull-up resistor (as suggested in the comments) could also help, so I will try this.

Update 1: I have tried increasing the pull-up resistor from 470 Ohms to 10 kOhms. There was no effect on the output; it still has the 20 mV "hump" after the initial ringing.

Update 2: Disconnecting the "mock-up" wire + mesh from the circuit and probing Point B directly has no effect on the measured signal.

Update 3: Below are traces for the corresponding points in the schematic above: 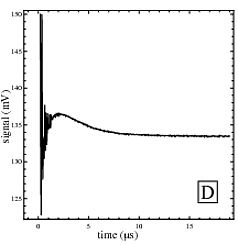 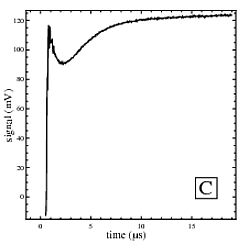 It appears as though the "hump" appears on the gate pulse, too. Point "D" right near the FET does not look any different than probing the mesh.

Update 4: I have (1) increased the pull-up resistor to 1kOhm, (2) removed the filtering 1000pF resistor, (3) disconnected the mesh, (4) added two "jam can" 470uF electrolytic capacitors to the rails, and (5) replaced the pulse generator with a faster one (Agilent 33250A). New schematic and traces: 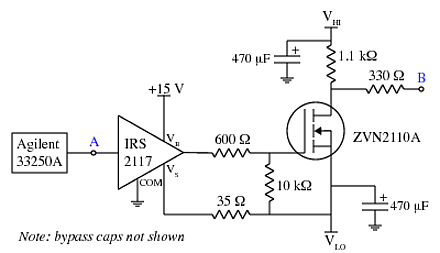 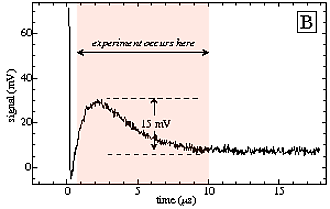 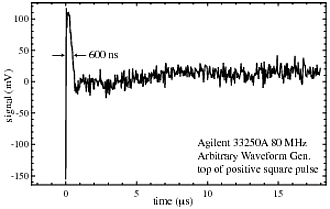 Even with a faster trigger pulse for the FET driver, the problem remains. The "jam can" caps do seem to filter out some high frequency oscillations, but the "hump" remains.

If you look at the characteristic frequency of the hump it's on the order of 100's of KHz. the only thing n that circuit that has a dominant pole in that range will be the power supplies. Look at the lower rail and see if it correlates to the hump.

I would bet that the hump, as you call it, is caused by the capacitance of the mesh and the inductance/impedance of the 24 cm cable. Here are some things to try:

Some of these, maybe most, are going to be impractical to do during "scientific operations", but they are worth doing anyway just to help narrow down where that hump is coming from.

It might be instructive to know what the voltage was doing (a) out on the grid, (b) at the resistor connected to point "b", (c) right at the drain of the FET, and finally, (d) at the gate of the FET. It may be inductance/capacitance in the wiring, but it might be the FET doing something other than what we expect.

I wonder if you could drive the grid directly from the IRS2117, since neither your voltage nor your current are extreme. A gate driver is designed to drive the capacitive load of the FET's gate, and this seems to be the nature of the original problem.

Finally, if you have to go extreme, some kind of control loop scheme may be necessary, where you have a negative supply and actually drive the output negative until it reaches zero (this pulls current from the grids)...then you bring a feedback line in from the output to control this driving circuit so that it applies just the right drive to get this behavior.

Edit: I just noticed V LO. What voltage is that? I think most of my answer just went away...

Fiirst, I assume that you are measuring the signal of interest at point B in your circuit.

Second, I presume that you have calculated the RC time constant that your circuit has to deal with - my estimates are (for short direct leads outside the vacuum system): C~100pF, R~600 Ohms, therefore t~0.1usec. To reach 0.1% of the signal requires ~7 time constants or ~0.7usec.

A problem with the circuit, as given, is that the output capacity of the MOSFET is 25pF, the input capacity is 75pF and the transfer capacity is 8pF. Also, the gate charge that has to be removed is 1n Coloumb.

As you have noted, the signal generator output is being transfered through the driver to the input and then to the output of the MOSFET. Also most pulse generators do not reach a true zero volts in their rated fall times - the time is usually specified as the 90% to the 10% time.

A better solution is to use a CD4010UB gate to replace both the driver and the MOSFET - connect the signal generator to the gate input and the gate output to the 600 Ohm resistor attached to point B. Unfortunately the '10 it is probably no longer availabe - I couldn't find one with a search.

In spite of the data sheet, I have used this configuration with Vcc from -0.3V to Vdd with no problem.

You will have to adjust the 600 Ohm resistor to compensate for the gate's internal resistance - ~200 Ohms - or you could parallel all six gate inputs and their outputs. If you do not parallel the other five gates, you should connect their inputs to Vdd - do not let them float.

There is a high probability you are measuring your scope's overload recovery. Consider the scope screenshot below: 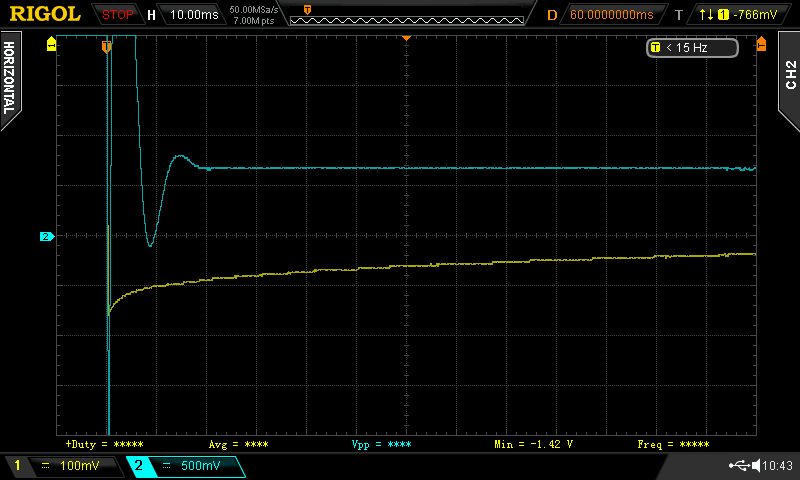 The voltage measured by the blue trace does not exist. As you can see, on the left side of the display, the trace went offscreen and clipped the highspeed opamp inside the scope analog frontend. This causes all sorts of nastiness, like differential heating in the input stage, upsetting of bias points, etc. As a result, the opamp needs several tens of milliseconds to settle... amazing for a chip which has hundreds of MHz bandwidth, isn't it?

I'm not saying this is the culprit, but it is likely. When the trace clips, even for a µs, the scope should not be trusted. Any linear circuit which clips, or nears clipping, even for an extremely short time (like 1ns), cannot be trusted for precision or settling until we're absolutely sure everything has cooled down, every stored charge in every integrating capacitor has returned to nominal value, etc...

This includes an opamp which goes into slew rate limiting, by the way. The recovery time is the settling time mentioned in the datasheet, and it is much longer after slewing than after processing a slew-limited pulse of same amplitude. Please note datasheet specified settling time usually implies the opamp DID NOT clip!

In order to measure your settling time, you will need special measures, most likely an analog switch to only let the voltage to be measured through a few tens of nanoseconds AFTER it is inside the scope's range...

You could also use a good precision opamp (specified for quick and accurate settling time, much faster than what you are trying to measure) and limiting diodes in the feedback network. Slow down the MOSFET switching until no spikes upset the opamp.

For the same reason, the flatness of your pulse generator output pulse cannot be measured with the scope.

Have fun! When Jim Williams app notes need to be brought in, you know you're in trouble! These are very delicate issues...

Not the answer you're looking for? Browse other questions tagged voltage mosfet or ask your own question.