I was told time and time again to always put decoupling capacitors as close to the IC pin's VCC as possible.

Sometimes when I make complex boards, I try my best to put the capacitor lead so close to the VCC pin, that the distance between the inside of the capacitor (where the pin runs into) and the VCC pin is less than 3mm.

There are times where routing the single-sided board gets so complex that I have to use 10 or 12 mil wide traces and make a track length of about 1/2 inch to even 1 inch in rare instances between VCC and the capacitor.

Whats the longest length I can go with traces between IC VCC and nearest capacitor before the decoupling effects of the capacitor become useless if the width is 10mils wide?

The answer is unhelpfully "as short as possible", and/or "it depends".

Whether it needs to be 1mm, 1cm, or even 1m will depend on factors such as switching frequency, signalling standards, whether sensitive analogue components are involved, how much EMI you can get away with etc.

The purpose of the capacitor is to provide a nice low impedance path between supply rails. The longer and thinner the trace, the larger the inductance of said trace, and the higher the resulting impedance (remember inductors are short at DC, and increase in impedance with frequency).

If you have a signal that toggles very slowly, and/or can cope with noise generated on the signal due to poor decoupling, then you can get away with longer narrower traces.

If however you have a signal running at hundreds of MHz, or into the GHz range, even a few millimetres of trace might be too high of an inductance. At this point even a via might add a lot of unwanted inductance.

In circuits with analogue electronics, things also get critical because supply noise and ground noise have a nasty habit of finding their way into analogue front ends.

The simplest way to find out is to build a prototype, and test it. If things work as expected and performance is within parameters, then your traces are short enough. If you find issues with noise or signal problems, poor decoupling may be a culprit.

Here are some resonant-capacitor-inductor-Rdampen screen shots. 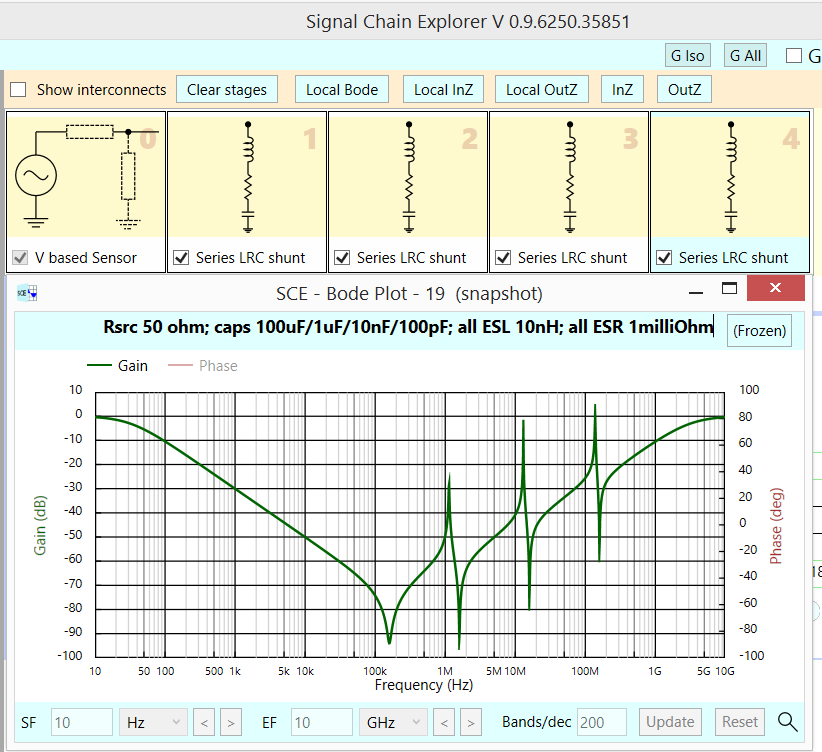 The following screen shot has all the dampening Resistors be 10 milliOHms. Notice the higher frequency peaks are NOT AFFECTED. You'll need more than 10 milliOhms (either lumped or ESR inside the cap or trace) for 10nH and 100pF. 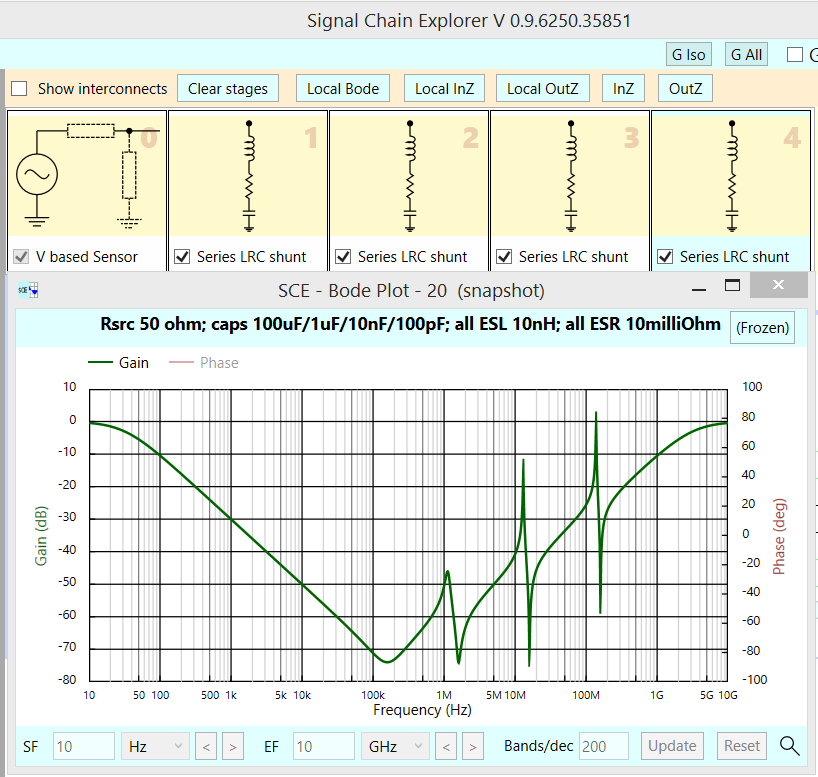 Your Question was "What is the longest thinnest trace"? Depends on the inductance you can tolerate.

Traces over air (no underlying plane) have about 1nH/millimeter or 25 nH/inch. There is mild dependency upon width. [its a log(1 + length/width) ]

Traces over planes have about 0.1nH/millimeter, depending on distance from trace to plane. Thus an underlying plane (GND or VDD or otherwise) will raise the resonant frequency by sqrt(10) or 3.16X. Be aware of that.

What can you get away with? Clearly, as you are already aware, you have at least 3 degrees of Freedom: capacitor value, trace inductance, and losses due to ESR or trace. A mere 10 squares of trace (0.08" long, 0.008" wide) has, at 500uOhm per square, an Rdampen value of 5 milliOhms.

Thus many crimes of this nature are hidden under the Rdampen of the traces and Vias.

At 10 milliohm, that dip has risen (been dampened) to -74dB and is quite broad.

It is dependent on the capacitor, the capacitor packaging, trace geometry, and PCB stackup. Your best bet is to do an FEM simulation with the s-parameters of the capacitor, if you have access to the tools.

The effect of the trace length can be quite dramatic.

Not the answer you're looking for? Browse other questions tagged capacitor integrated-circuit decoupling-capacitor vcc or ask your own question.