I'm working with a factory which has a backup generator which is used during grid instabilities or whenever the factory must disconnect from the grid for maintenance. In these cases, the generator is used instead to maintain operations.

However, I'm investigating whether there's another opportunity in using the generator's excess capacity to sell power on the grid.

I'll advance now that this question is not concerned with energy-market regulatory or financial viability issues for this idea (I've simplified the context here). The question is whether this is technically feasible.

The generator would then need to power two separate networks (the factory and the regional network), as seen below.

I had to create this with Powerpoint due to do the particular setup for the generator, which needs to feed into the two circuits without connecting them with each other (otherwise that'd just be the grid powering the factory, when this is precisely in the case when that's not possible or desirable).

So, this is the first part of the question: is this even possible? Can a source power two circuits while keeping them isolated from each other?

Assuming it is possible, we then get to the second part of the question. The generator's primary objective is powering the factory. Whatever is done on the grid is secondary. So the power must satisfy the factory and -- if there's excess capacity on the generator -- then feed into the grid.

Now, my thinking is that the factory has certain power needs (let's assume 1 MW). The generator (let's assume it can generate 1.5 MW) can run at 2/3 capacity and satisfy those needs. However, if the generator is also connected to the grid and is ramped up to generate it's maximum of 1.5 MW, where will those new electrons go? The resistance of the grid will be effectively infinite (when compared to the factory or the generator), so the natural route would seem to be factory. Which would mean the generator fries the factory's circuit and feeds almost nothing to the grid.

So, is it possible to design a circuit or device (including PIDs, microcontrollers, whatever) such that as much power as needed goes to one circuit, and the excess goes to another?

Can a source power two circuits while keeping them isolated from each other?

Not when running from the same generator but that's not how you would do it anyway.

What you are proposing is quite common in countries with reliable energy supply but where peak demand is on the edge of system capacity. Industrial users with generation capacity can sign up to receive payment for being available for remote start-up and power generation. Going online requires the following operations:

You are now pushing energy into the grid. Since your load is the closest it will draw the power it requires and the rest feeds into the grid.

where will those new electrons go?

Forget electrons. They just oscillate back and forth in AC and don't "go" anywhere. Think of current.

The resistance of the grid will be effectively infinite (when compared to the factory or the generator), ...

Nope. The resistance of the grid is close to zero. That's why the lights don't dim much when you switch on your big loads.

... so the natural route would seem to be factory. Which would mean the generator fries the factory's circuit and feeds almost nothing to the grid.

Nope. You'll only need a couple of volts higher than the no-load mains voltage to start exporting power. 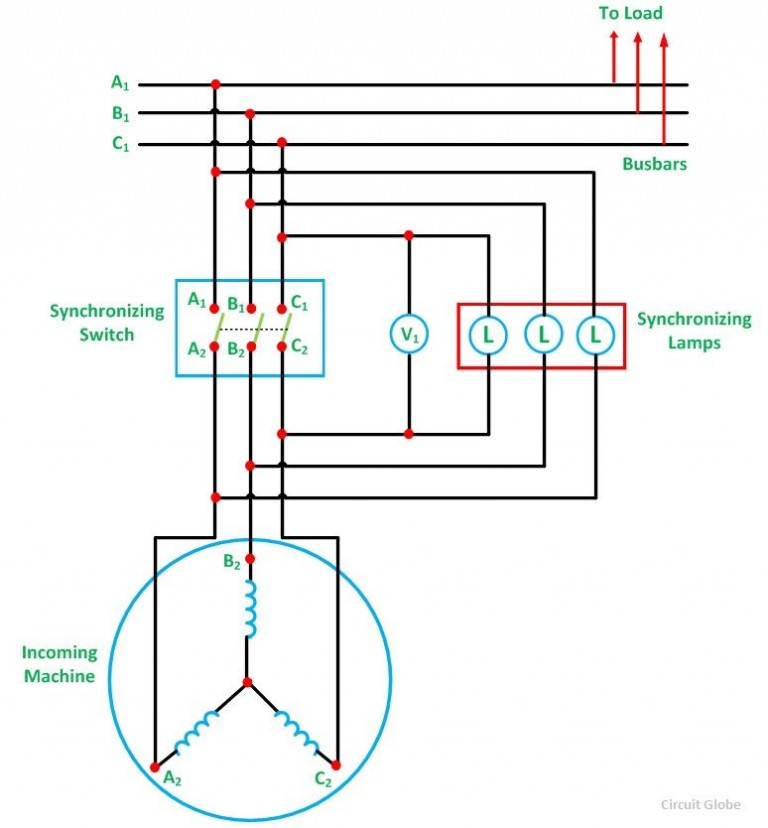 I did this in college many years ago where we had a machine (the incoming machine of Figure 1) driven by a DC motor. We ramped it up and all three lamps start blinking slowing down as the difference in frequencies gets smaller. When the lamps go out there is no voltage across the contacts so they can be closed without arcing. We then applied power to the DC machine to generate power and feed back to the grid. A following exercise was to reduce the DC machine drive and then switch it into reverse and ramp up the power to act as a brake on the AC machine which then imported power from the grid to act as a motor. It was a most educational experience.

Commonly known in the UK as G59, and as G10 injection testing in the Republic of Ireland, these regulations apply to power plants and generators used for standby and peak lopping application, or grid parallel use.

Yes, this is certainly possible. It would function just like a grid tied solar power system. When power draw of the factory is less than the gen's capacity, excess power can flow into the grid, and when it exceeds the gen's capacity power will flow from the grid. Whether this is economically viable is another question entirely.

Not the answer you're looking for? Browse other questions tagged generator power-engineering or ask your own question.

6
Putting far more mechanical energy into a generator than its electrical load
2
Simple Gas Generator question
0
Auto load limiter reverse power problem
2
Method for Measuring Power Flow in a Distribution Network?
9
How does the Electrical Grid React to Large Changes in Supply or Demand?
0
How does a generator not stop itself?
2
Generator to home wiring
17
How can energy "physically" be fed back into the grid?
3
Fault Ride Through requirements for wind turbines