Transistors as switch and amplifier to control LED strip

I am controlling an LED strip based on audio input from my phone. I am having some good results, but not exactly what I want, and my ignorance of transistors is holding me back. (I'm a mechanial engineering major rather than electrical.)

I have my phone connected to an amplifier which then outputs an AC audio signal through a bridge rectifier and then that DC signal is sent through an NPN transistor (TIP 121) acting as a switch to control an LED strip. I've got the lights to choreograph to music and it looks great, however, it only works when the volume is very loud. As I increase the volume, the LED strip gets brighter, and as I decrease it, the LED dims.

My first question is why does this happen? I have the strip connected to 6V so shouldn't the input from the amplifier to the transistor only switch on and off the 6V supply?

And if I want the lights to work at low volume (when there is too of low current from the amp to switch the transistor,) can I add a second transistor to act as an amplifier (based on a common collector/emitter follower circuit?) Should that second transistor go before or after the bridge rectifier? 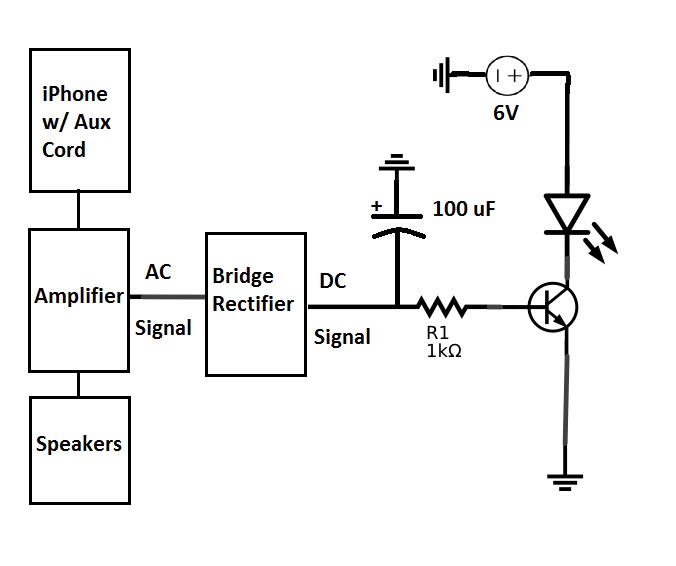 First, an NPN transistor isn't really a switch, it's a current amplifier. If you put no current into the base, it allows no current through the collector. If you put a small current into the base, it allows a larger current though the collector. In digital circuits, it can be used as a switch by setting the base current to zero or quite a bit, and never anything in between. But your circuit may well be operating for some of the time in the "linear" region where the transistor is acting as an amplifier.

Second, it takes about 0.6V to turn on an NPN transistor at all. A silicon diode, as used in a bridge rectifier, also takes 0.6V. And there are two of them in either path through the rectifier. So nothing at all happens until the voltage exceeds about 1.8V. The lower the volume, the less time the voltage will exceed 1.8V.

In my living room I have not just one LED but I have a LED sound loudness meter with 10 LEDs that each lights at a different loudness from a microphone. It has a peak detector circuit that charges a capacitor very quickly when there is a sound then the capacitor holds its charge for 30ms (long enough for our vision to see its brightness) then if there is less loudness the capacitor discharges slower but still fairly quickly.

There is no need for the bridge. Without it, the transistor will conduct on the positive half-cycles. This reduces the detection threshold to 0.6 V, much better for lower volume audio. The transistor's base-emitter junction will be reverse-biased during the negative half-cycles, which is fine because many transistors have a reverse voltage spec of around -5 V, way more than the phone output.

Audio frequencies are very high compared to what the eye can perceive as flicker, so the LEDs should look the same without the alter-ate half-cycles that the bridge was providing.

I don't see any LED current limiting. Is is built into the LED strip? What is the LED current requirement?

#1 a transistor is a current control device that proportionally conducts along its load line. This is why they were first called trans-resistors. They require a DC bias for them to conduct. A MOSFET is a current control device that allows or denies a current conduction based on the threshold voltage of the gate. I does not require a bias as the trans-conductive device is always in a state of conduction. If you want the dimming light effect, like the circuit example, but want it staring at a lower detection voltage, you would add a voltage divider across the base circuit, and set the base's voltage just slightly below the condition state of the LEDs. Like so: 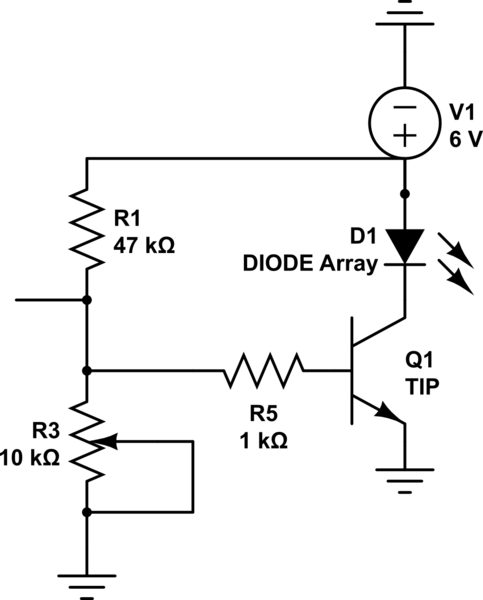 Alternatively, you can set this threshold in the detection circuit, and carry the dc offset over into the stage like this: 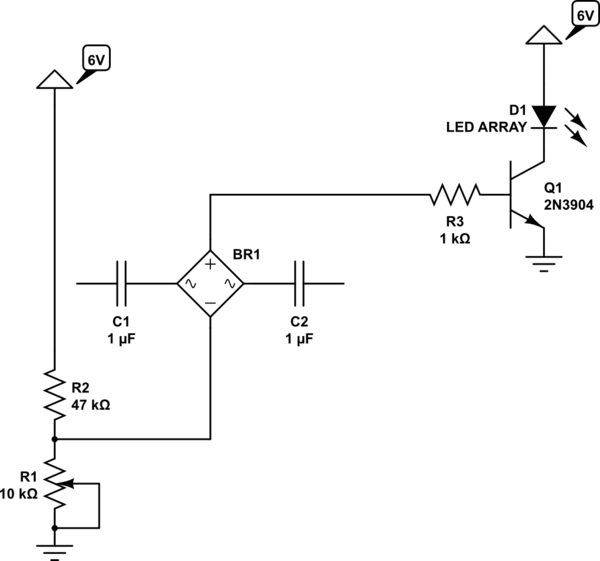 Of course if the AC coupling device is a signal transformer, you could modify the circuit with adding the voltage divider at the secondary's center tap, to control the voltage offset.

Not the answer you're looking for? Browse other questions tagged transistors led amplifier diodes speakers or ask your own question.

0
Switching a transistor with audio output
1
Dimming LED using Transistor as a Switch or as an Amplifier?
1
Driving lights with an audio amplifier
1
CD4011 Oscillator Square Wave Output Fed to Transistor Audio Amplifier; Volume Control Question
0
Help choosing a transistor to drive an LED strip from a Raspberry Pi
0
Transistor amplifier keeps flickering between working and off
1
LED current at output of AND gate