I've been playing around with the well-known slayer exciter, and trying to make a tesla coil.

The standard 1 transistor setup works fine for me, but the arcs I'm getting are pathetic, and it can only light up about half of a CFL bulb.

I tried replacing the transistor I was using (BC548) with a larger power NPN (BUL310PI), which stopped the circuit working altogether.

Since the circuit worked with the smaller transistor, I thought it was either to do with the larger transistor being too slow or having too low an hFE value.

I thought if I used the BC548 to drive the base of the BUL310PI, I could overcome the gain problem if there was one.

The LED I was using for a diode lit up when I did this, so I had oscillation working again, but the coil couldn't light a CFL or make arcs. The LED also dimmed whenever I brought my hand close to the topload. 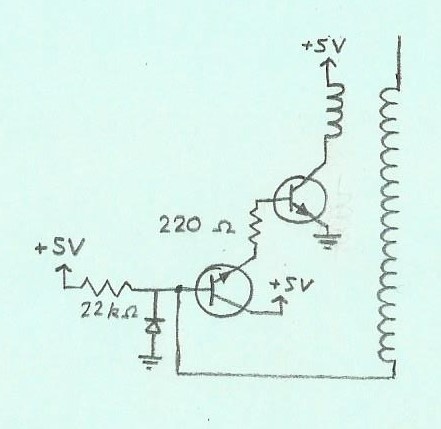 The transistor on the left is the BC548, the one on the right is the BUL310PI.

I've used 8 turns for the primary, ~300 for the secondary, and a large cardboard circle covered in aluminium foil for the topload.

What else can I do to make this work?

The Darlington pair is concerned that its speed is very slow. Especially the turn-off time is too late. So you should use the totem pole as shown in the figure for speeding up. 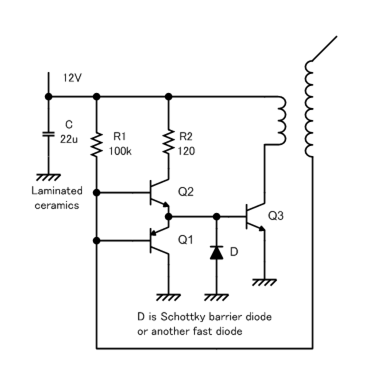 The energy stored must equal the CFL rating and for this we need to know L, and f.

But for a rapid flyback effect, Q2 needs a faster decay time to turn off. This add some resistance across Vbe of Q2. ~<10k

Not the answer you're looking for? Browse other questions tagged tesla-coil or ask your own question.