Let me explain what I mean by an imaginary case. Let's imagine a 10 V battery in series with two resistors equal in resistance value. The voltage in between those resistors is 5V according to the voltage division rule. I have a component (does not matter what it is) which needs to be powered up by 5 volts. When I try to use that 5V voltage value in between those resistors to power it up, the voltage division rule breaks and I get less than 5 volts across that component. I cannot figure out how to provide it 5 volts to power it up by using voltage division or basic circuit analysis techniques. What is the way to achieve any voltage value across any component we want?

In a typical LDO device, a transistor is used as a variable resistor to adjust the potential divider and achieve the desired output voltage.

There are other types of regulators that use different methods, but the common feature is the device regulates the output voltage to remain as constant as possible regardless of the load presented, or the input voltage.

The wiki page has more information than anyone would ever want

The answer by Oliver is indeed correct. However, I will just add why you are seeing the results you are seeing when trying to power something through your divider.

You are correct in saying that for a power supply of 10V DC, dividing it down via 2 equal resistors will give you 5V. we see that here: 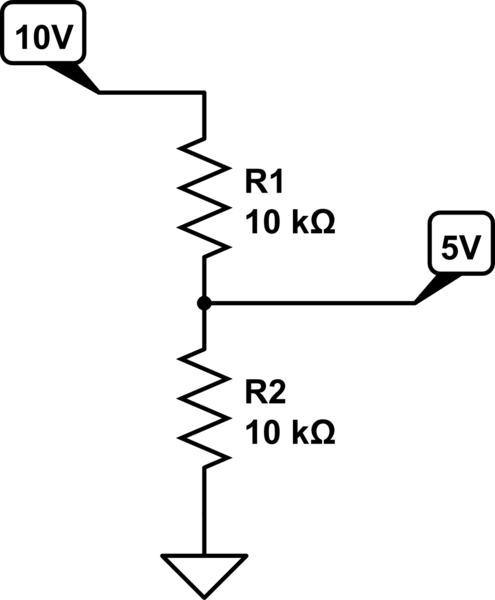 So, what would happen if you fitted a load on this? Let us see: 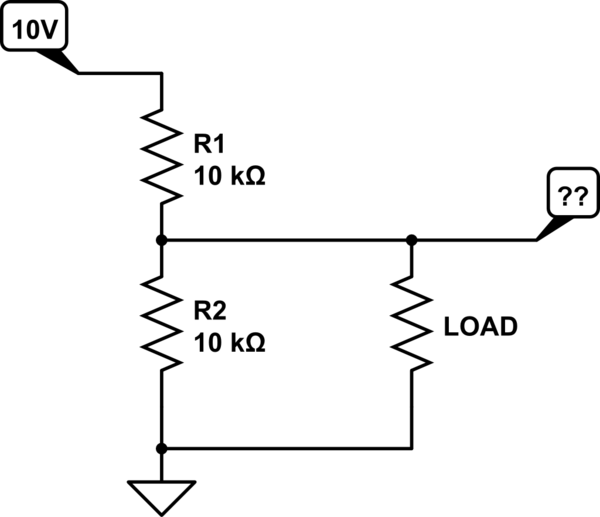 So you can see that the voltage division rule does not break, you have just adjusted the values.

Adding a voltage regulator (for 5V the classic 7805) will be able to ensure you have a stable output voltage no matter what the load. This is usually done with an internal compensation circuit such as this: 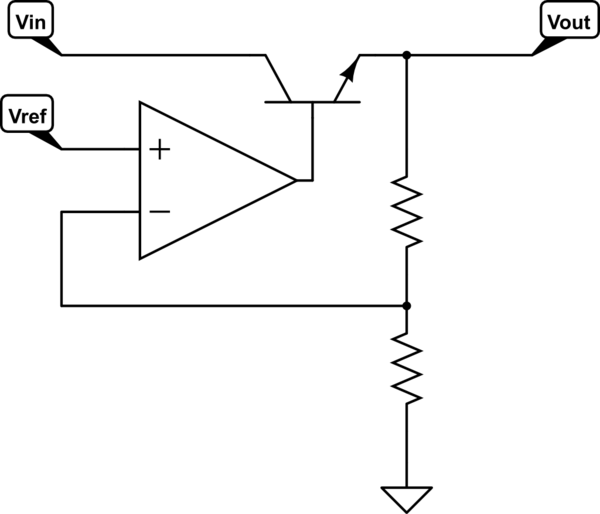 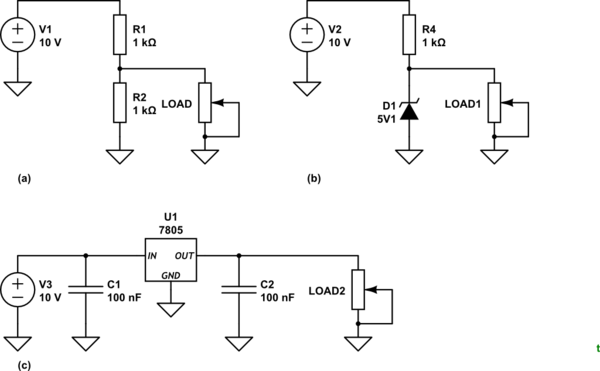 As you have discovered, the simple voltage divider of Figure 1a is not stable. Once a load is connected the voltage drops below the divider-only value and, worse, it varies depending on the load.

A simple voltage regulator can be formed using a Zener diode. These do not conduct in the reverse biased mode (as shone in Figure 1b) until the voltage rises above the breakdown voltage, 5.1 V in this case. The trick here is to set R4's value low enough to provide 5 V on the load at maximum load current. If the load current reduces then the voltage would tend to rise but D1 will break down and hold the voltage at 5.1 V. You will find plenty of reference material and tutorials online.

A three-terminal linear voltage regulator, Figure 1c, provides a very simple and cheap solution. The regulator circuit adjusts its "resistance" to maintain the output at its rated voltage, 5 V in the case of the 7805 regulator. The capacitors are required to prevent oscillations so don't be tempted to leave them out.

Note that all of these arrangements waste half the supplied energy as heat. Switching, rather than linear, regulators are much more efficient.

We can't build a circuit that will supply a perfect 5V to any possible load.

What we can do is build a circuit that will provide a sufficiently good approximation of 5V to a load whose current consumption is within a defined range of values.

The next step up is to replace the bottom resistor with a non-linear component, for example a reverse biased zener diode. The voltage across these components varies much less with current than the voltage across a resistor. So the current through the top resistor need only be slightly larger than the maximum current drawn by our load.

This is essentially the design of the most basic linear regulator, real regulators may have additional components but they are likely to have the same basic elements.

The final option is a switching converter. A switching element is rapidly switched on and off and then an inductor/capacitor circuit is used to filter that into a stable voltage. This can be very efficient, but it adds substantial complexity and noise considerations.

Not the answer you're looking for? Browse other questions tagged voltage circuit-analysis voltage-divider or ask your own question.

47
When would I use a voltage regulator vs voltage divider?

1
Capacitor voltage influence
1
Why is the Inductive reactance formula (XL=2πfL) not working for me?
0
How does current split in this circuit?
0
Voltage drop and voltage dividers
0
Using a low-voltage switch in a high voltage circuit
0
Fixing the Collector Current for a BJT amplifier
3
Measuring the voltage drop across electrical components doesn't match the calculated values
0
Voltage across different resistors in a series circuit containing just voltage source, resistor and ground measures the same