The circuit consists of following: 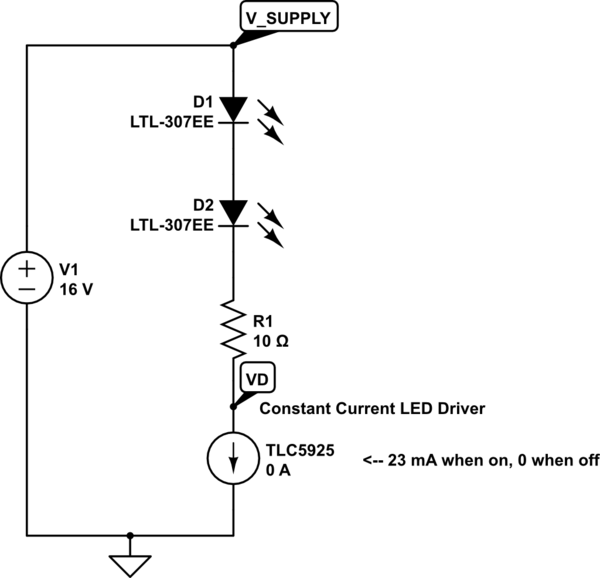 And video on this link.

Summary: When there is no current flow on the circuit, supply voltage is about 16 volts, and the voltage difference between V_SUPPLY and VD is 0 volts. However, the voltage on the drain of constant current LED driver is 13 Volts. How could this be? Does the multimeter itself messes the results? And how does LEDs behave in this condition - when led driver is turned off?

There probably is a very small current leaking through your current source or your multimeter (something in the order of microamps or nanoamps). You can model this as a very high parallel resistance. This would result in almost no voltage across R1, but a considerable voltage across the LEDs according to the diode equation.

I guarantee the voltage do add up. No matter how you wired the circuit it will not defy the laws of physics.

If you have another volt meter (or scope) measure the voltage between VD and GND while measuring the voltage across the LEDs. See theory below. 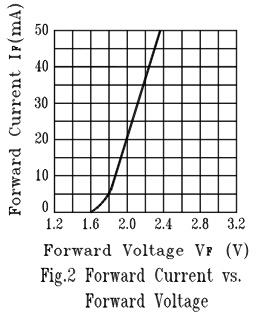 When the TLC5925 is not enabled there is a leakage current of about 1 µA.

This would leave 13V at VD.

If you plan to use more than 4 outputs of the TLC5925 you will need to increase the value of the resistor. With your current circuit you are dropping 0.27 watts on the one output.

At 23 mA a 400 Ω resistor will drop almost 10V. This will not have any effect on the current. The current will continue to be set by the TLC5925. This will lower the voltage across the TLC5925, and alleviate thermal stress on the TLC5925 when (if) more outputs are used.

And how does LEDs behave in this condition - when led driver is turned off?

The LEDs only need the minimum Vf to turn on. LEDs do not have a minimum current. Vf will follow the the datasheet's IV curve. Some LED datasheets (e.g. OSRAM) will show the Vf at very low (µA) currents.

The Rdynamic of the two LEDs is about 3 MΩ at 1 µA.

This is only a theory. You would have to run some empirical experiments to verify.

If you do not have another meter, try adding a 10 MΩ resistor in series with the meter's lead. What happens to the voltages?

Not the answer you're looking for? Browse other questions tagged voltage led constant-current or ask your own question.

3
Calculating LED current flow in a parallel circuit
3
Discrete LED Driver Topology
0
10 Watt LED and LED Driver related question
4
maximum reverse voltage applied to a resistor-LED configuration
0
How to find current and voltage requirements of an LED lamp / strip using a multimeter?
8
can leds take varying voltage > listed voltage, with constant current?
1
How does a dot matrix led driver know the voltage of an led?
1
Can the voltage drop of an LED driven at a constant current be higher than the supply voltage?