Is there a Semisynchronous Buck Topology which mixes the advantages & disadvantages of both?

I was looking at "What is the purpose of using MOSFET instead of free-wheeling diode in Buck topology?" and the referenced PDF which discusses the trade-offs between a traditional asynchronous Buck with the lower Schottky diode, and the more complicated but more efficient MOSFET which replaces it. Then I thought, "If you allow the Schottky diode to remain, but parallel it with a MOSFET, you could use comparators to sort of notice the Schottky conducting and turn the MOSFET on, and then turn it off again when the flowing current has decreased enough. This would improve efficiency, prevent the possibility of shoot-through, and take the synchronous complexity and move it out of the switching chip." Yet I haven't seen it, so perhaps there is some reason why this isn't done.

So if this does work, it would produce yet another possible set of trade-offs which could be considered. Meaning that the Schottky diode wouldn't have to dissipate as much heat, and the efficiency of the circuit would improve, at the cost of additional circuitry? Thanks ahead of time.

More recently, I stumbled on something that, to me, makes answers related to this question more important for achieving better efficiency.

In this TI app note about designing an Isolated Buck (Flybuck) Converter, there is a Synchronous Buck with three outputs, as shown: 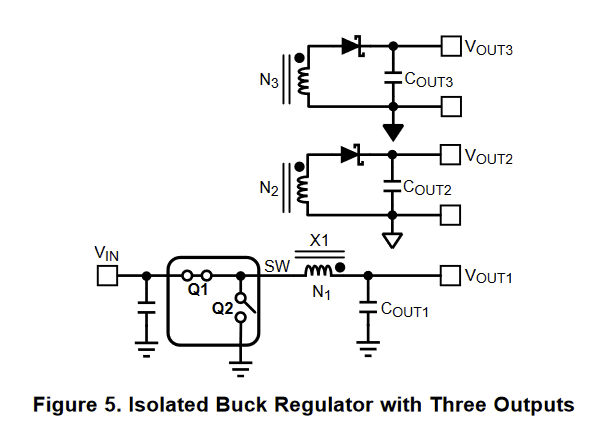 As you can see, only Vout1 has had its Schottky diode replaced with a MOSFET, and the other two outputs are still sustaining the same Schottky diode efficiency losses as would a standard non-synchrous Buck.

Can those isolated outputs be easily made synchronous? I haven't seen it so far, but even so, I believe that there are significant efficiency gains to be realized by this method, especially with multiple isolated outputs. And the cost of extra MOSFETs should be partially offset by smaller heatsinks, and lowered cooling costs because of less heat generated in the isolated output Schottky diodes.

So, does this method exist, and if so, what is the name of this method, and if not, I will in the future ask how it may be done in a separate question, and link to it here. Thanks ahead of time.

Synchronous rectification can be motivated by several factors, however, it is difficult to beat a Schottky diode in terms of losses. Neglecting the ac ripple (deep continuous conduction mode), the conduction loss of a diode is \$P_d\approx V_f*I_{d,avg}\$ whereas for a MOSFET, it will be \$P_Q=I_{D,rms}^2*r_{DS(on)}\$. The diode drop goes down with temperature while the MOSFET on-resistance increases with temperature. However, synchronous rectification often helps getting rid of a diode heatsink as paralleling MOSFETs in SMD packages reduces the total on-resistance and power dissipation.

For a CCM-operated buck converter, the upper-side MOSFET "sees" the inductor current during \$DT_{sw}\$ while the diode "sees" the inductor current during \$(1-D)*T_{sw}\$. Thus, for low duty ratios (12 to 3.3-V output for instance), the upper-side switch conducts much less than the diode (considering CCM) and it might be interesting to adopt synchronous rectification (sync rect). If you now convert a 6-V source down to 5 V, you can see that the diode conduction time will be much less than the MOSFET and it is less interesting to adopt sync rect. Self-driven synct rect is popular in active-clamp forward converters where the inductor always operate in CCM, even in no-load conditions. This avoids narrow pulses which collapse the auxiliary \$V_{cc}\$ otherwise and it keeps the same dynamic (small-signal) transfer function as conduction mode does not change.

Finally, there are a lot of dedicated synct rect controllers. They all observe the voltage across the driven MOSFET and check when the body diode conducts or stop conducting. Semi vendors rival in tricks to avoid false tripping and try to reduce the controller's sensitivity to stray inductances (in the package itself and the PCB also) which is a real problem in high-power converters. You should be able to find more information in semi vendors application notes.

The disadvantages are largely the extra cost.

A major advantage is that the MOSFET on/off timing becomes less critical as the diode handles the current if the FET is switched on late or switched off early. As the diode handles current only at the switching edges (if at all) it may be rated at far lower mean current.

I have also seen converters as above with the FET and diode allowed for on the PCB but only the diode equipped.

Paralleling the MOSFET with a Schottky does not remove the possibility of shoot-through, though it does allow a smaller MOSFET to be used, which might help with efficiency of a supply that has to be very efficient with a light load and less so with a heavy load (or low input voltage). The MOSFET gate drive can use a significant amount of power, especially for a larger low-Rds(on) MOSFET operated at high frequency.

As to your edit question- maintaining isolation whilst driving the Snchronous rectifier MOSFET gate with precision is going to be significantly more difficult and expensive than simply integrating a MOSFET and the drive circuitry into a SMPS chip. The example circuit has two isolated outputs and one non-isolated output (the synchronous one).

Not the answer you're looking for? Browse other questions tagged switch-mode-power-supply buck efficiency synchronous or ask your own question.

12
What is the purpose of using MOSFET instead of free-wheeling diode in Buck topology?

4
Can a synchronous regulator "chirp" in burst mode?
12
What is the purpose of using MOSFET instead of free-wheeling diode in Buck topology?
4
synchronous buck ls-FET switching losses and dead time minimization
4
How to properly drive MOSFET in MPP tracking duty cycle above 50% for a synchronous buck regulator at 50-100V input?
3
Buck/Boost Converters-- What's the 'cost'?
1
Is there a voltage buck converter which also boosts output current?
0
The way to efficiently operate some power devices with less loss, and appropriate heat sharing
2
Advantages of consequent buck converters