I have built a simple bus backplane from stripboard and 40-pin female headers for a computer project I am working on. When I tested the backplane to make sure that it functioned, I found that it's soldered properly but that inside one or two of the female headers I used as connectors, there is a short that connects three lines on the backplane.

Visual inspection is of little help, the flaw isn't visible; it is inside the connector shroud somewhere.

So my question is: Is it possible to measure with a multimeter somehow, which of the seven paralleled connectors is the culprit? I would like to salvage the backplane and just replace the offending connector if possible. 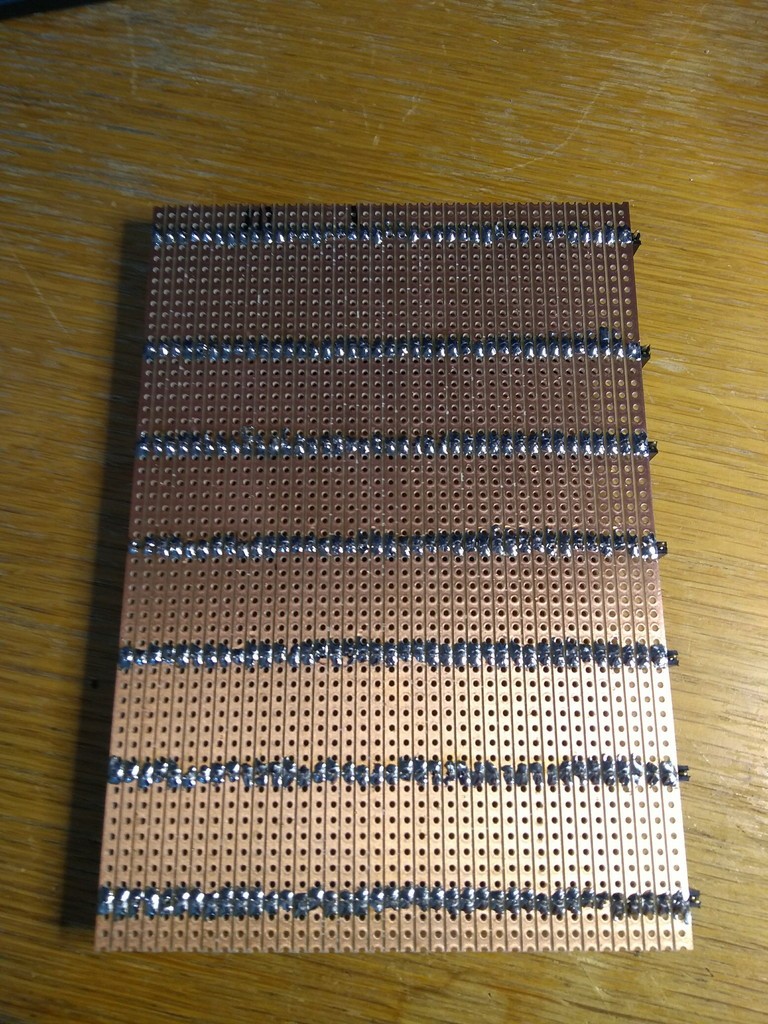 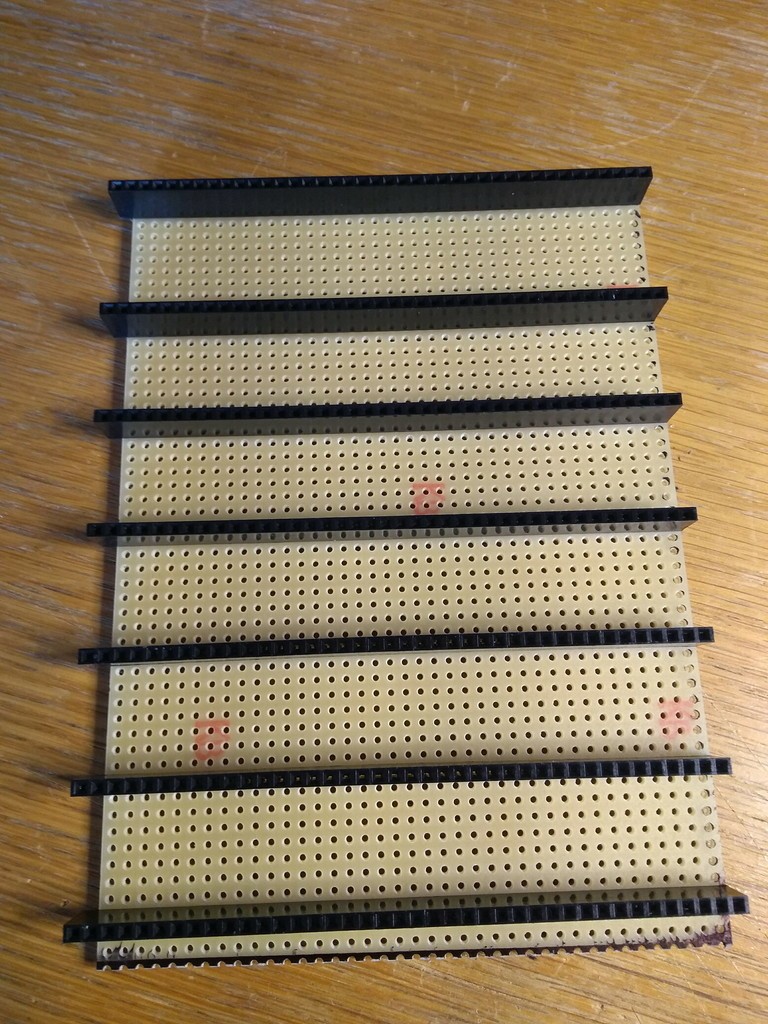 In all probability, it's got something to do with your soldering and not with the insides of the connectors (which were made by precision machines, and likely even tested before leaving the factory).

Take a knife and make sure to clean the gaps between your tracks. It must also fit between the solder "blobs".

Your solder joints aren't very uniform – that's really where I'd start looking. Even the tiniest little solder needle will be a short. All in all, from an effort point of view, if simply removing as much solder as possible from these and resoldering the 21 contacts in question doesn't help, redo the whole board. That time, first cleanse your copper track (slight rub with something abrasive, alcohol), so that you don't get a copper oxide layer. Apply a small amount of (preferably liquid) flux to the tracks prior to soldering in your first connector row. Use less solder overall.

This is what I found, these tiny little copper bridges were all over the board. Problem solved, thank you for the help. 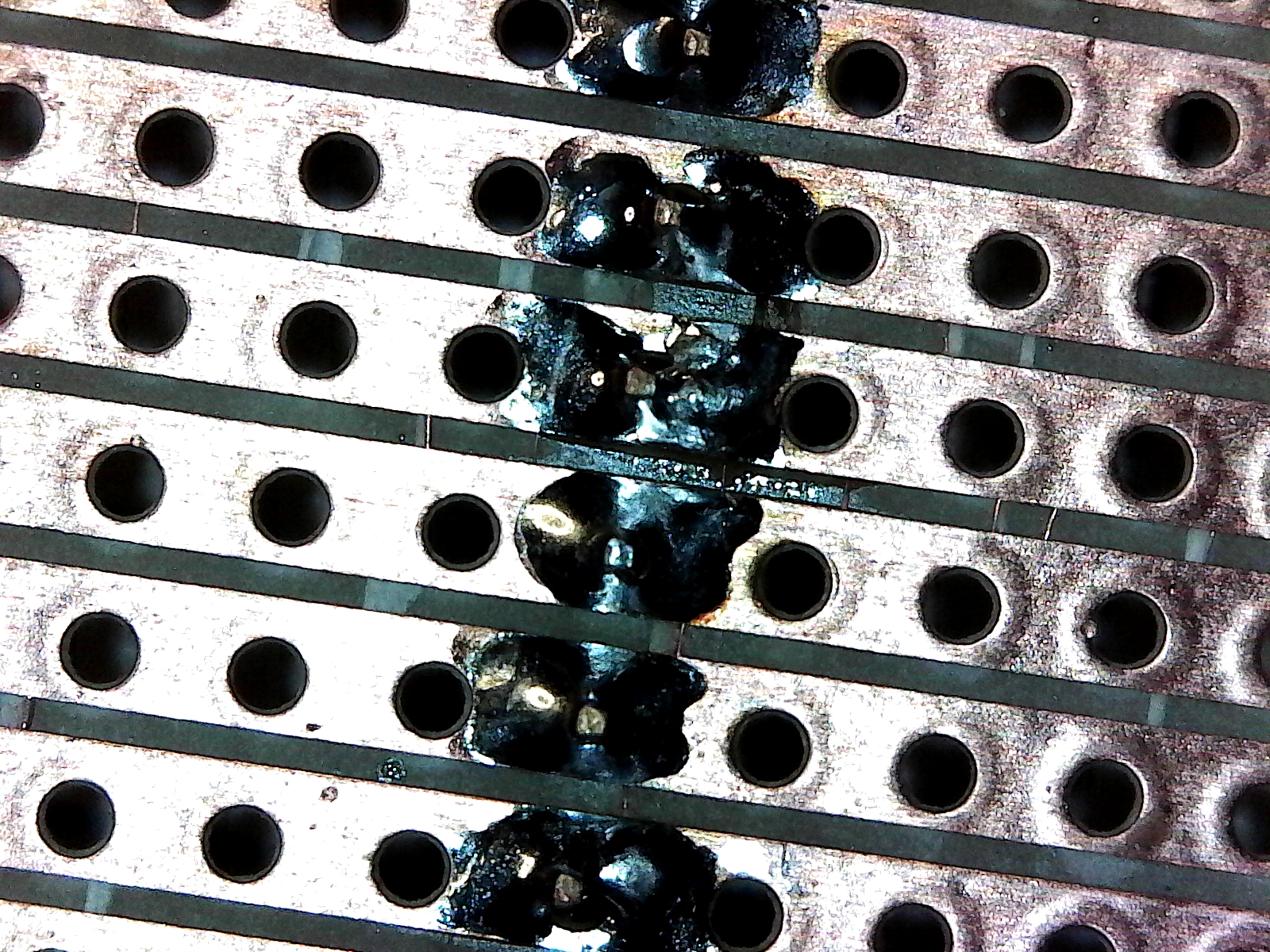 Although you've already found the problem (well done), here are a couple of options for people with similar problems in the future:

A special kind of meter could have been used, but not many people have one - a milliohm meter. These are capable of measuring resistance with much greater sensitivity than typical multimeters.

Starting the measuring at one end of the "shorted" tracks and moving towards the other end, the measured resistance would have steadily decreased as the milliohm meter probes got closer to the location of the short between two tracks. This would tell you that you were getting physically closer to the short.

After removing one short, you would need to repeat the process in case there were multiple shorts between the same two tracks (as there were on your board).

Another approach may be possible in your situation of a "bare" board (i.e. no components) but only if you have a variable current, current-limited power supply (e.g. a typical bench supply) and a multimeter with millivolt sensitivity. This becomes a home-made milliohm meter (not very accurate, but as I explain below, that doesn't matter in your case).

You would connect the power supply between the two "shorted" tracks, but not with the intent to burn out the short. The current is intended to cause enough of a voltage drop across even low value resistances, to have a measurable voltage drop on a good multimeter e.g. in the millivolt range.

Depending on the accuracy of the current limiting from your power supply, the millivolt reading on your multimeter might not be able to be accurately converted into milliohms, but for finding a short you don't care about the absolute reading. As described above, you only care about the relative changes which occur as you move the probes along the tracks i.e. is the reading getting higher (you're moving away from the short), or is it getting lower (you're moving towards the short).

(†) As kindly pointed out by glen_geek in a comment, there is a risk with this technique that if (a) the "short" is formed with a weak-enough material, and (b) the test current is high enough to "blow out the short", then this process of trying to find the short, might remove (or partially remove) it. That prevents you actually finding it, or assessing whether it may reform in future.

Therefore it would make sense to minimise this risk, by starting with the lowest current that still allows a difference in the voltage drop to be measured along the "shorted" tracks.

Not the answer you're looking for? Browse other questions tagged repair troubleshooting or ask your own question.