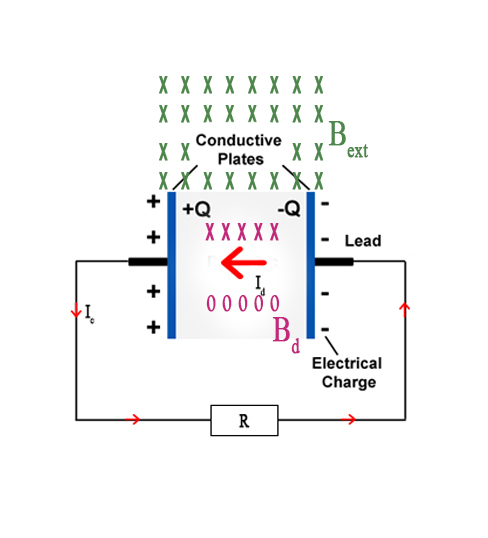 I was analyzing the possibility of varying an exterior magnetic field, that's aligned in direction with the magnetic field produced by the displacement currents(both parallel in the same plane) shown in the figure above.

And when I used this equation to model the case:

NOTE: The magnetic field will be confined mostly in the separation gap of the two plates, to reduce it's effects on the overall loop(that includes the load/resistor).

Bd is around the axis of the capacitor. An externally caused field Bext doesn't boost Bd if it isn't around the same axis. I think that you do not want to add a piece of metal to make a direct current between the plates. That would cause just the right Bext and surely it accelerates the discharging.

Another possible way to make more field around the axis of the capacitor is to somehow increase diminishing rate of the electric field between the plates. That's Maxwell's famous virtual displacement current (which in insulators can also be a real molecular de-polarization current). But that is just accelerating the discharging somehow. You must accelerate discharging to get a field which is hoped to accelerate the discharging. How ingenious!

You can accelerate discharging by adding an opposite voltage in series with the resistor.That voltage can be induced by a changing magnetic field. The localization of that field is not critical, it's enough it goes through the discharging current loop. If you want to restrict it between the plates, it's ok and there's no need for the changing magnetic field go just around the axis of the capacitor.

There exists a trick to insert external changing magnetic field which really is around the axis of the capacitor: Insert a circularly magnetized permanent magnet between the plates. That will accelerate discharging or make it slower depending on the polarity of the magnet, because during the insertion movement the field changes in the discharging loop. The effect exists only when the magnet moves.

Not the answer you're looking for? Browse other questions tagged capacitor electromagnetism capacitance or ask your own question.