What is this type of motor called? 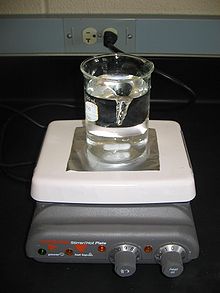 A small bar magnet sits inside the glass jar, while another bar magnet, attached to a motor is spun underneath the jar. This causes the first magnet to spin too, thus stirring the liquid.

But I'm sure it must be possible to do this without the motor underneath, simply using coils. Either a brushless motor or a stepper motor.

And now my question:

Is there a name for such a motor, where there are coils on one side of a sheet of glass (or similar), but the rotating / permanent magnet part is on the other side?

Finally found the closest thing to an answer, thanks to hints from David Kessner and Ignacio Vazquez-Abrams.

A pancake motor (AKA Floppy Drive motor) has a planar separation between the rotor and stator, and so is most suitable for working through a sheet of glass. 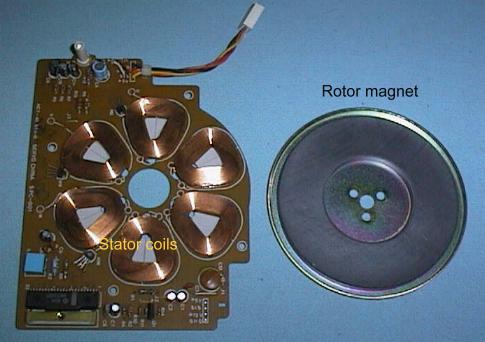 My college roommate built exactly what you are talking about. This would have been back in 1978-79 or so. It worked quite well, and we used it mainly to mix up our TangTM. IIRC, he didn't use a microprocessor — just a 555-based oscillator and a ring counter to generate the waveforms to drive the coils.

I don't think this type of motor has a specific name; the closest thing would be a degenerate form of stepper motor.

There are a few drawbacks to doing it this way. At slow speeds, the motion is very jerky, and sometimes the magnet would just jerk back and forth rather than rotating, especially if it was sitting in a pile of undissolved Tang.

Also, I'm not sure if this is related to your question or not, but there is a class of pumps called "magnetic coupled pump" that are used in situations where rotary seals would be a problem. Sometimes they use a separate motor and magnetic coupling, and sometimes the rotor of the motor is part of the impeller.

Maybe this is called "induction motor"? This is what some turntables use to spin the platter. http://en.wikipedia.org/wiki/Induction_motor

Not the answer you're looking for? Browse other questions tagged motor stepper-motor mechanical brushless-dc-motor or ask your own question.

0
What is this equipment called?
29
Difference between Brushless Motor and Stepper Motor
0
What type of motor is this?
1
Systematically, what would happen if I give a crank at the shaft of a motor?
0
What motor type is better suited for instant torque supply
0
Which type of DC electric motor is the best suited for driving a mechanical clock?
0
What stepper motor is this?