I want to make a tiny led glow for 10 minutes once charged by induction. I want the entire PCB not greater than 20x20x5mm. Is it possible? I have come up with the following circuit, I don't know if it works are not but my idea is to store energy in capacitor and inductor when the switch is closed and make them discharge through LED when the switch is open. You see, LEDs of electronic devices glow for a while after they are turned off. I have not put accurate values as I don't know what capacity of components are available in the market. I don't want to use a battery as I want a very long lifetime. I am sorry if anyone gets offended for asking this without practicing electronics. 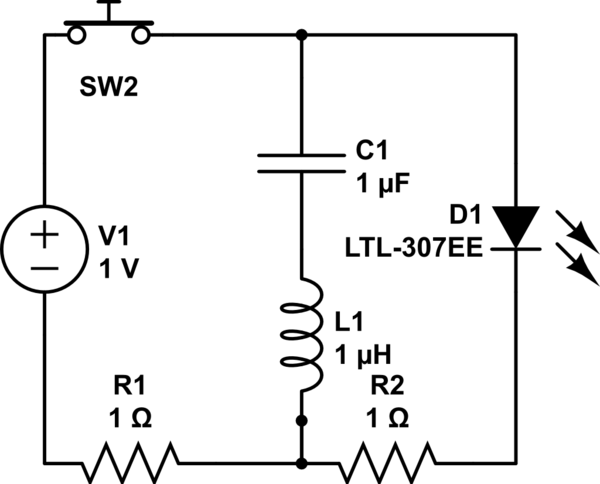 I have a feeling you want something similar to the way that mobile phone wireless charging works. but instead of it charging a battery in your mobile phone you want to charge a capacitor which can then be used to power your LED.

The following reference is useful to what I believe that you are looking for: WIRELESS LED CIRCUIT

A notable difference would be, instead of just the inductive coupling powering the led, you wish to store that energy to power the LED for 10 minutes.

You will then find the following question useful for calculation the discharge time of the capacitor: CAPACITOR DISCHARGE CALCULATIONS

However, after the above being said it wasn't made clear why there is a reason to use a capacitor and rely on keep charging it. some batteries are designed to last years especially at such low current draw.

EDIT: The following link regarding capacitors being used to power and LED may be of some use to you: CAPACITOR LED

I want to make a tiny led glow for 10 minutes once charged by induction. I want the entire PCB not greater than 20x20x5mm. Is it possible?

Putting the inductive charging aside, your non-battery energy storage requirements cannot be met in a volumetric space of 20 x 20 x 5 mm.
The 5 mm height constraint is very problematic.

Not the answer you're looking for? Browse other questions tagged led reactive-power or ask your own question.

20
How do I calculate how fast a capacitor will discharge?
19
How long would a 150 Farad Capacitor light up an LED

6
Blinking an LED using a generator as the source of electricity
2
how to put led to indicate the signal is functioning
1
Driving USB LED units from 12v
2
Different LED for POWER ON and for LOAD ON, how to wire?
0
Need a circuit that lights a LED but shuts down LED after a while
1
Newbie question: Light weight, temporary power?
0
Undesirable ramping in LED intensity
0
Using a LED with an ESP8266 module