Testing hot side of smps circuit with simple secondary loads

Goal: Testing hot side of SMPS independently of the cold /feedback circuit

I tested the Mosfet on the hot side of SMPS along with the rest of the circuit ( snubber circuit, bleeder, etc - not shown) by connecting to a resistive load in place of the pulse transformer and the oscilloscope verifies that it worked as planned. Since I am testing with open loop circuit the feedback circuit is not important at the moment. 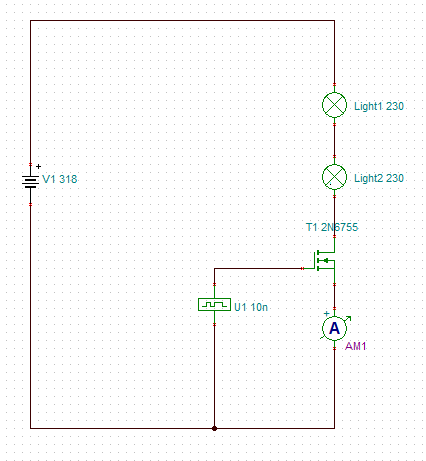 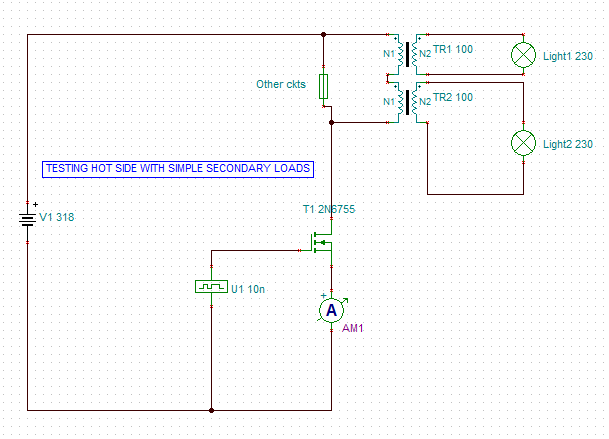 Q1 How to ensure that the energies from the transformer is correctly drain by the secondary loads?

Q2 What will be example of simple loads on the secondary?

You cannot have load when the forthcoming pulse is under charging to the magnetic field of the transformer - a diode is obligatory to prevent current in the secondary when the switch is conducting. You have a growing current ramp in the primary during the magnetic energy charging period. Switching the mosfet off causes as high voltage to occur in all windings as is needed to let the current continue in some of the windings. This is the flyback pulse. You need so low resistance load that the voltage rating of the mosfet nor the transformer windings aren't exceeded.

If your transformer is 1:1, the output peak current is the same as there was built up in the primary when the mosfet was turned off. If your secondary in use has only half of the number of turns in primary, the peak current in the output is the max primary current doubled.

To keep your mosfet in safe, you must

Then measure the input current pulse and the output voltage pulse with the oscilloscope. Calculate the pulse energies to see how much is lost. There's no need to run more than one pulse if you have a proper memory oscilloscope.

If you have not an oscilloscope with proper bandwidth (say 50MHz or more) and high voltage probes, this task can be a little too much.

Lamps are not good test loads because their resistance is highly varying. Cold filament can have only 15% of the resistance of the same filament as hot. Use a resistor and keep pulses so sparse that you do not burn it.