This question is applicable to any generic sensor in a Wheatstone Bridge configuration.Let us assume it is the following pressure sensor.

Is it possible for me to connect two of these full-bridge wheatstone sensors in series or parallel and get double the output voltage as compared to a single wheatstone bridge.

@Henry and @Wouter. Thank you for your answers. I tried to run a quick experiment by connecting two resistive W-bridges in series, but did not get a double output voltage.

The following image shows what I am trying to do. Here, the output differential voltage (V1-V2) will not be different from a single W-bridge. The individual voltage at these nodes will always be the same voltage divider of the bias voltage irrespective of how many W-bridges are cascaded in series.

Please let me know if I am missing anything here. 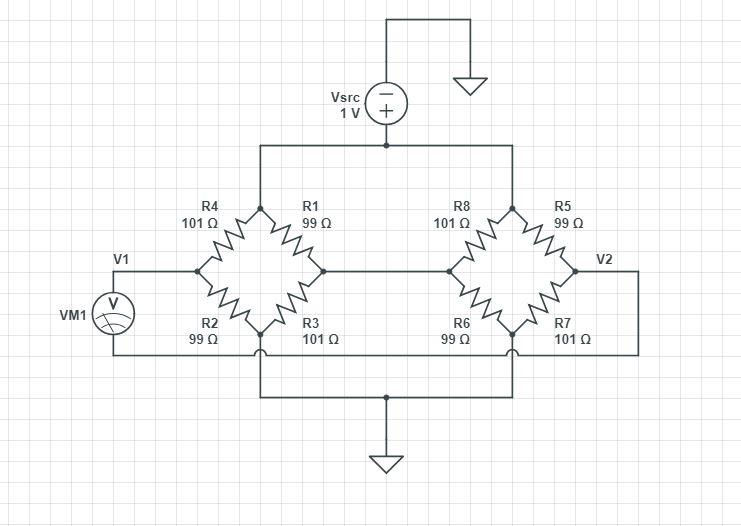 No, at least not in any reasonable way that I can imagine.

The output of a W-bridge is a differential voltage (between two points). To read this voltage, you need a measurement instrument that has two inputs that are independent of the ground (and power).

You could add a second W-bridge and put the two ouputs in series, but that second W-brdige would need a power supply that is isolated from that of the first one. This makes it an expensive idea.

You would get twice the measurement value, or the summation of two measurement values. To get twice the value, rasing the power voltage might be a better idea within bounds). To sum two independent ones, you could combine the two sensors in one bridge, or simple use two differential input pairs of an AD converter and defer the combining to firmware.

Yes you can increase sensitivity in the limit case (but probably not as usefully as you are hoping), so here goes:

The ultimate noise limit is set by thermal noise, and at 20C it is a fixed power (-174dBm/Hz)

The Signal voltage is fixed by bridge voltage * bridge gain. Signal power is set by V^2/R.

So if you parallel two bridges (both under strain), Signal voltage remains constant, R=1/2, and Power=2x.

And sensitivity improves by sqrt(2).

Now for this to be useful, your sensitivity has to be limited by thermal noise.

For bridge circuits, it is more often limited by thermal drift, hysteresis, and mechanical processes that produce analogous effects to 1/f and 1/f^2 electronic noise.

One reason for this is that bridges are often used in very low bandwidth applications. If you are weighing a truck, the bandwidth is less than 1Hz, so the thermal electrical noise is very small.

Now this would change if you tried to use your bridge at very high speed. e.g as an ultrasonic microphone. If the signal bandwith is large, and >10kHz, then thermal electrical noise may well become the limiting factor, and reducing bridge R would help.

Also while normally you would choose to use a single lower resistance bridge to improve sensitivity, this has a thermal limit as the bridge power dissipation is increasing as you lower R. At some point, you have to stop, and then using multiple separate bridges becomes your only option to further reduce R.

AC bridge amplifiers using microphone transformers would let you keep improving SNR down to less that 1 ohm of resistance - a 1000x improvement from a 1k bridge!

Also realise that you can combine signals after the amplifiers. This will equally reduce noise, but also reduces the amplifier noise as well. (it also opens up options for beamforming to further improve SNR when signals or interference comes from a particular direction, even in non-obvious areas like temperature sensing)

In order to get double the differential voltage you need 3 differential amplifiers to get a single ended output. Since share a common voltage they cannot be added.

A better way is to use a differential amp or INA with gain that you need and choose the input polarity to get non-inverting output.

If expect bipolar pressures and voltages it may be possible to offset for a single supply.

There are many ways to do this in AC energised bridges. Here's one (note all transformers are a single transformer with multiple secondaries) using a transformer on the excitation side. (which is normally preferred), but you can have them on the signal side if you prefer (useful for very low resistance bridges)

And not so hard to do in the DC way either.