I need to select a constant current driver with PWM facility ( 0-5v max ) to control the LED intensity from a micro-controller. What type of driver IC will be best suit for this application?

What I know so far is:

If I'm using 3 driver ICs and dividing up the LED load among those, is it still okay to use 3 pwm channels from the microcontroller for dimming all the LEDs simultaniously?

I've googled a bit and found these ICs, but confused in selecting the best one for the job.

Please do suggest me a good design method and suitable driver IC.

A very simple way to power the LEDs is with a Mean Well HLG-100H-24B AC powered LED driver. With this Type B you use a 0-10V PWM signal.

I still think the best is to have a single serial string of LEDs. If you can only use a maximum of 12V then I still recommend a CC driver rather than CV.

For 9-12V use need 2 or 3 parallel strings. To keep the current balanced in each serial string you either use a separate CC LED driver for each string or use a single CC driver and balance the current through the strings.

The way to balance the strings is to use a Multi-String LED Current Balancer for Use with Constant Current Power Supplies such as the Texas Instruments LM3466.

If you think you can run multiple strips with a single CC driver add a shunt resistor to easily measure the current in each string. I guarantee the strings will not be balanced. At least you can measure how unbalanced they are. I have seen where two string are driven in parallel the current mismatch was typically between 30% and 50%. I have seen them go into thermal runaway. This was using Lumiled Rebel LEDs from the same reel.

This is a fairly simple and inexpensive 350 mA, 95% efficient, Buck CC driver.
Use TI's WebBench to optimize for max current, input voltage, and output voltage. 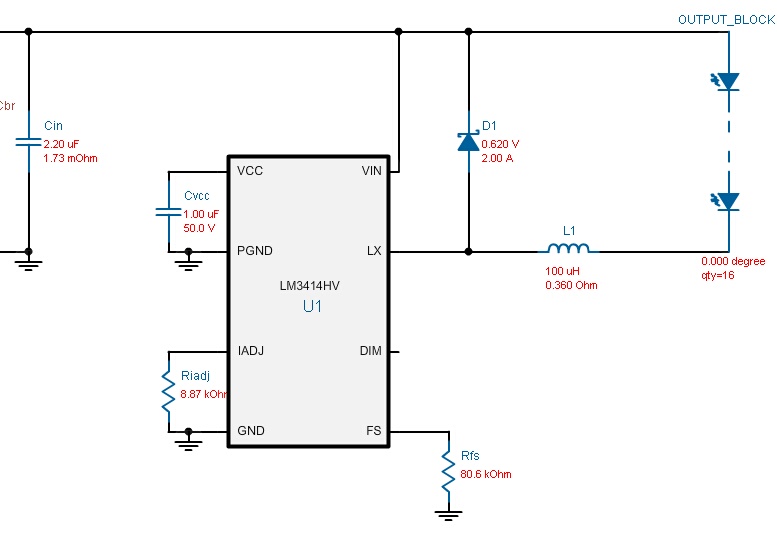 The Lumidled CZ Line is not very efficient. You may want to consider a cooler alternative.

These can go up to 36V, so you could use the same controller for longer strings as well.

The ICs come in a 0.5mm pitch QFN package, so check that your board house is capable of putting soldermask between those pads reliably, otherwise it will be rather difficult to solder.

Not the answer you're looking for? Browse other questions tagged microcontroller led pwm constant-current led-driver or ask your own question.