The circuit-level “why” of the loudspeaker / amplifier “POPP” sound

in the other question about the "popp" sound I asked if the "popp" is harmful to a loudspeaker. Since I am also interested in the "why" on the circuit level, here is my next question. I put this question here and not in the audio design part because I think the problems also apply to other power amplifiers beneath these for audio systems.

So...what is the reason?

CoreyF answered to my previous question, that professional audio equipment uses power sequencing systems to turn on the components of such a system one after the other and the amplifier in the end. (And here starts my interpretation) This helps to avoid these loud sounds / the surges that are generated by switching processes of other compoinents to be amplified and supplied to the loudspeakers.

But if I am right that means that the surge itself is initially generated by other components than the amplifier (e.g. the mixing console), right? The amplifier only amplifies the already generated surge.

If my assumptions from above are correct, how do I avoid these surges in non-professional audio systems? For example: My active loudspeakers I have here make a "popp" whenever you switch them on or off (the attached audio source is already up when I switch them on or off, so no surge comes from there).

That means, the "popp" comes from the circuits inside the loudspeaker.

My intention is to modify the loudspeaker in such a way that it doesn't make these "popp" sounds any more, but for that I want to understand, where the sound comes from (where the surge is generated).

Since there are three different situations in which a popp occurs, here are my three "problems":

Which of my ideas and guesses are wrong or right?

The loud pop you hear when turning on a power amp is most likely caused by DC blocking capacitors somewhere in the signal chain.

Suppose you have to connect two stages together, for example the input stage and the pre amp stage of your amplifier. For design reasons, the output of the input stage has an output DC voltage of 1 V, while the input of the pre requires -2 V DC to operate correctly. The numbers I am giving are just random, but they help proving the point.

To connect these two stages, you usually use a (fairly large) capacitor. The largest it is, the better, because it introduces a zero in the origin and a pole at a frequency that is proportional to the inverse of C, so basically it is an high pass filter, and for audio you want that pole below maybe 20 Hz or something.

This big cap needs to be charged when you power up your device. In our example, the input stage will source current to set its output to 1 V, while the pre will sink current to set its input to -2 V. Assuming that the input stage output is more powerful, which probably is the case, the voltage on one side of the cap goes to +1 V almost immediataly after power up, so the other side goes to +1 V as well.

This sudden voltage spike is the pop you hear.

A picture is worth a thousand words though. I have devised this stupid simple circuit:

If you run a time domain simulation for 100 ms, this is what you get: 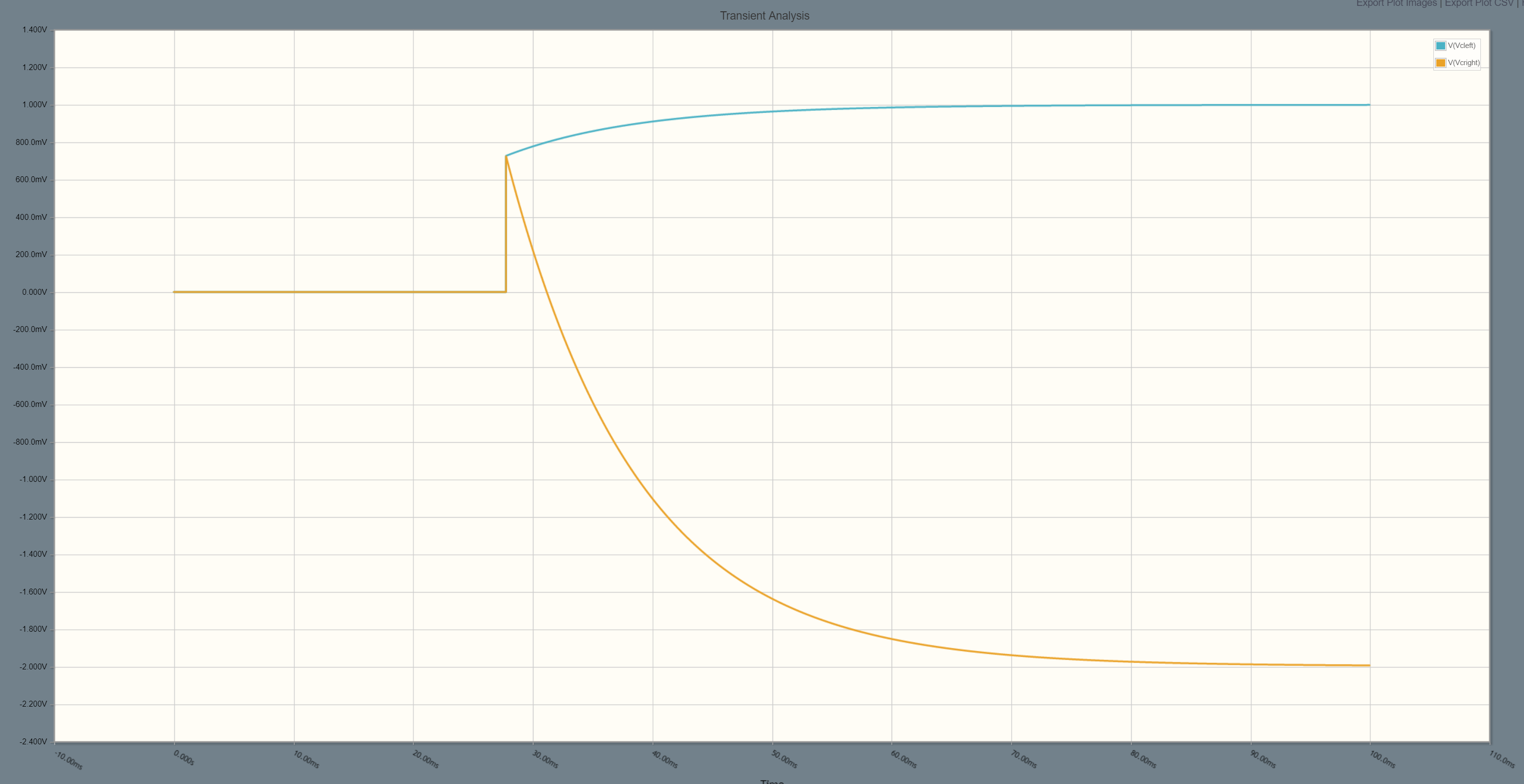 the orange trace is the voltage I have called Vcright, and it is the voltage that is propagated down the signal chain. See the spike? I can almost hear the POP :)

To solve this issue there are several approaches. The easiest one is to have relays just before the power output, when the amp is powered on the relays are open, and they are closed after a few seconds. Another way is to limit somehow the bias currents when the equipment is turned on, in order to smooth out the spike you see.

1) [...] I plan to use a "soft start" circuit, using a timer and a relay which connect the rest of the circuits after a short delay to the supply.

Soft-start may not help - a preamp may have enough gain that a slow-ramping soft-start transient may achieve fast-ramp status at the speaker-end, and produce an audible result. However, it may sound attenuated than it otherwise would be, or sound like a "thump" instead of a "whack". You may require a soft-start period longer than you think, to be effective.

2) Why does the active loudspeaker "popp" when I switch it off? That "popp" also occurs not immediately when I push the switch [...]

This is most likely DC power slowly decaying. Amplifier circuits remain operating in linear region as normal, until DC voltages or currents decay to a point where non-linear operation begins. That's when circuits do strange things, and is where you get a "pop". Each circuit topology reacts differently to decaying supplies - some produce particularly egregious pops. For example, fully differential amplifiers can produce small pops, if carefully designed.

3) Whenever I accidentally disconnect the loudspeaker from the mains without switching it off using the front-panel switch, a really loud "bang" occurs.

Am perhaps misunderstanding - you have a switch that specifically disconnects a passive speaker from amplifier? If this produces a bang, it suggests that your amplifier is applying a DC voltage to your speaker - a serious fault indicating a damaged amplifier.

Why is it louder when I switch off the mains instead of using the front panel switch? From my point of view I assume, that the front panel switch only disconnects the secondary side of the transformer from the capacitors of the supply, which reasons the discharging and the difference in the switch-off process "popps/bangs".

Your front-panel switch perhaps incorporates some pop-reduction mechanism that the brute-force mains switch doesn't. For example, it may break the signal chain to the speaker (apparently not soon enough), taking the edge off a "bang".

Additionally I assume that the sudden power loss generates a high voltage at the transformer's secondary due to it's inductance.

I would hope that any inductive kick-back would be accounted for in the design, otherwise something soon breaks after a few power-cycles. Usually, rectifier/capacitors would absorb such a quick transient.

Most ordinary home stereos use a relay to delay connection of the speaker to avoid a pop when it is turned on and disconnects the speaker immediately when turned off.

Not the answer you're looking for? Browse other questions tagged amplifier audio sound transient-suppression power-sequencing or ask your own question.