I am trying to understand the way constant current LED drivers work. Lets say I have a driver with these specs:

Now suppose, I want to use the same driver to power up two 6 watts LED lights. I can still do so by wiring them in series. Output voltage in that case will be 40 V.

Now lets say I want to light up a single 6 W bulb which requires 300 mA.

Then the LED driver will drive the chain of LEDs to their sum of Vfs, which should be between 36 and 63 V, with constant current of 300 mA.

If Vf of your chain of LEDs sums up to 60V, this LED driver will work to its maximum capacity of 18 W.

In short, "wattage" of LEDs has little meaning without knowing their Vf. If you say you have a LED lamp of 6 W at 300 mA, it means that nominal Vf is 6/0.3 = 20 V (internally there are several LED chips in series). So yes, connecting 3 of these LED bulbs in series will sum up to 60 V and be about optimal. This answers Q1.

For Q2, yes, two bulbs make Vf at 40 V, which also meets the driver specification. The driver will drop its output to 40 V while maintaining 300 mA drive current. They will work just fine, and the light fixture will consume 12 W (plus losses).

For Q3, it depends on driver design. The 20V is below the CC (constant current) capability of this driver. The result will be either intermittent flickering, or reduced (but steady) current. Here is the load characteristic of some MeanWell driver: 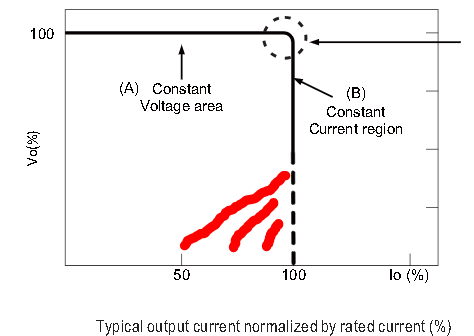 Red region shows unpredictable (design-specific) behavior of the driver, but the current shouldn't exceed 300 mA in any case.

The Watts of an LED is the wrong criteria to select an LED driver.

Step 1 is to determine the current requirement for your LED(s).

Step 2 is to calculate (min-max) or measure the forward voltage Vf of the LED or sting of LEDs at the target current. 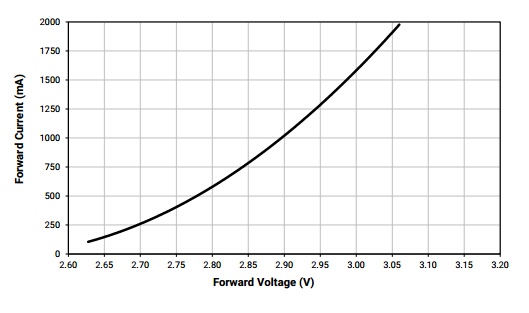 Below is the voltage and current ranges for a popular LED driver. This particular driver (Mean Well HLG-40H) can supply up to 40 Watts.

Generally speaking as the voltage of the LED driver increases from 12V to 54V the efficiency improves. So for white lighting applications I use 16 sets of 3 parallel LEDs (3P16S) in series. 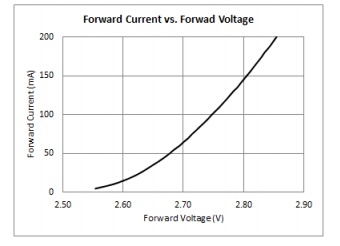 Vout min=36V so 36/Vf@0.3A defines the minimum string xS of LEDs required. If they are a ~12V array then a minimum of 3 series arrays are needed.

Not the answer you're looking for? Browse other questions tagged constant-current led-driver or ask your own question.