If I feed a square wave into a first order, passive, low-pass filter (resistor and capacitor), I get the following results on an oscilloscope (sorry, I don't know how to scale and rotate images): 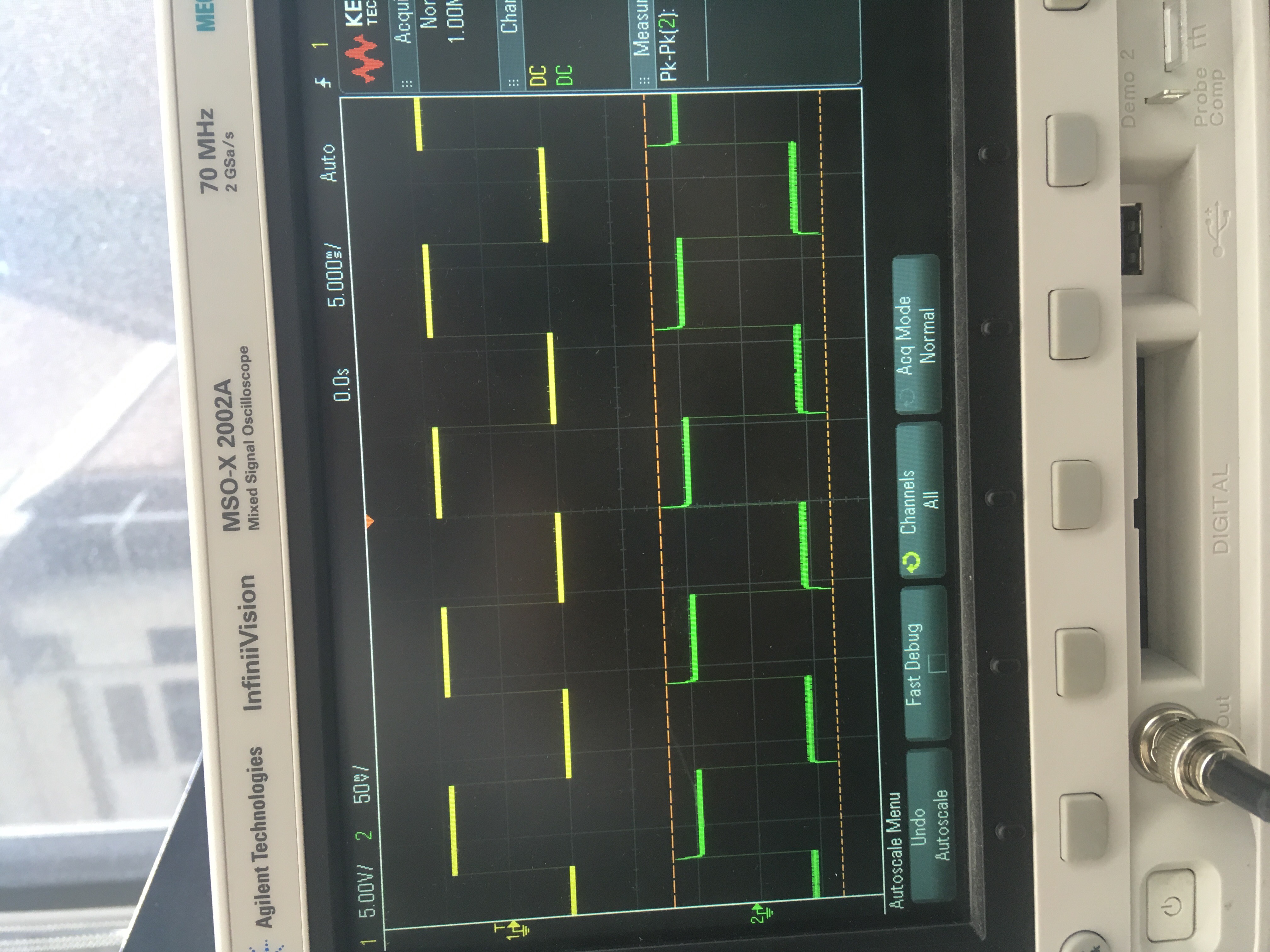 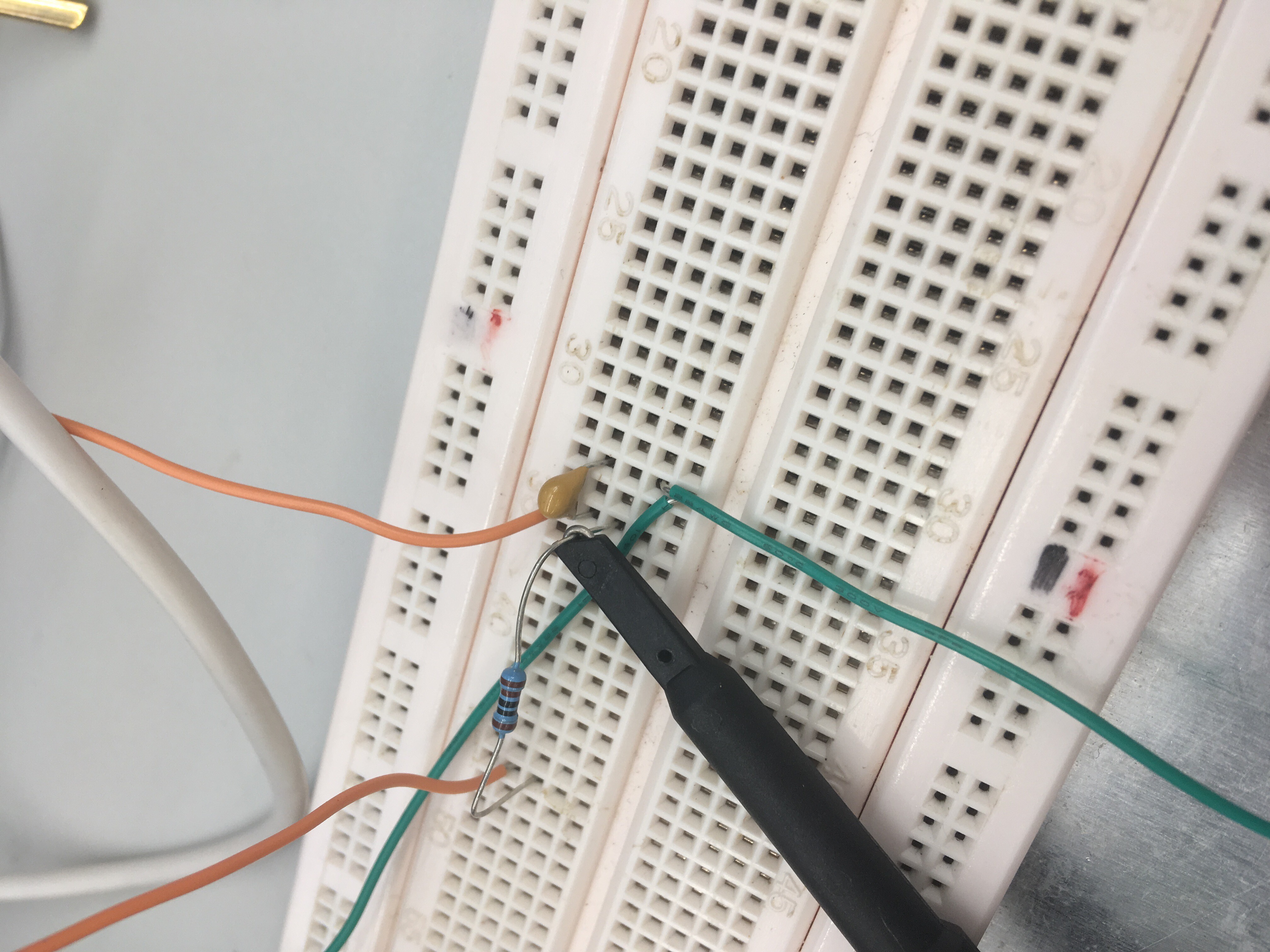 Why does the overshoot only occur on half of the corners of the square wave? Based on Fourier analysis, partial sums of a square wave should look something like this:

This is the Gibbs phenomenon. Here the overshoot occurs on all 'corners' of the square wave, rather than just the ones following a transition. I got some similar results when testing the frequency response of a unity gain buffer op amp: 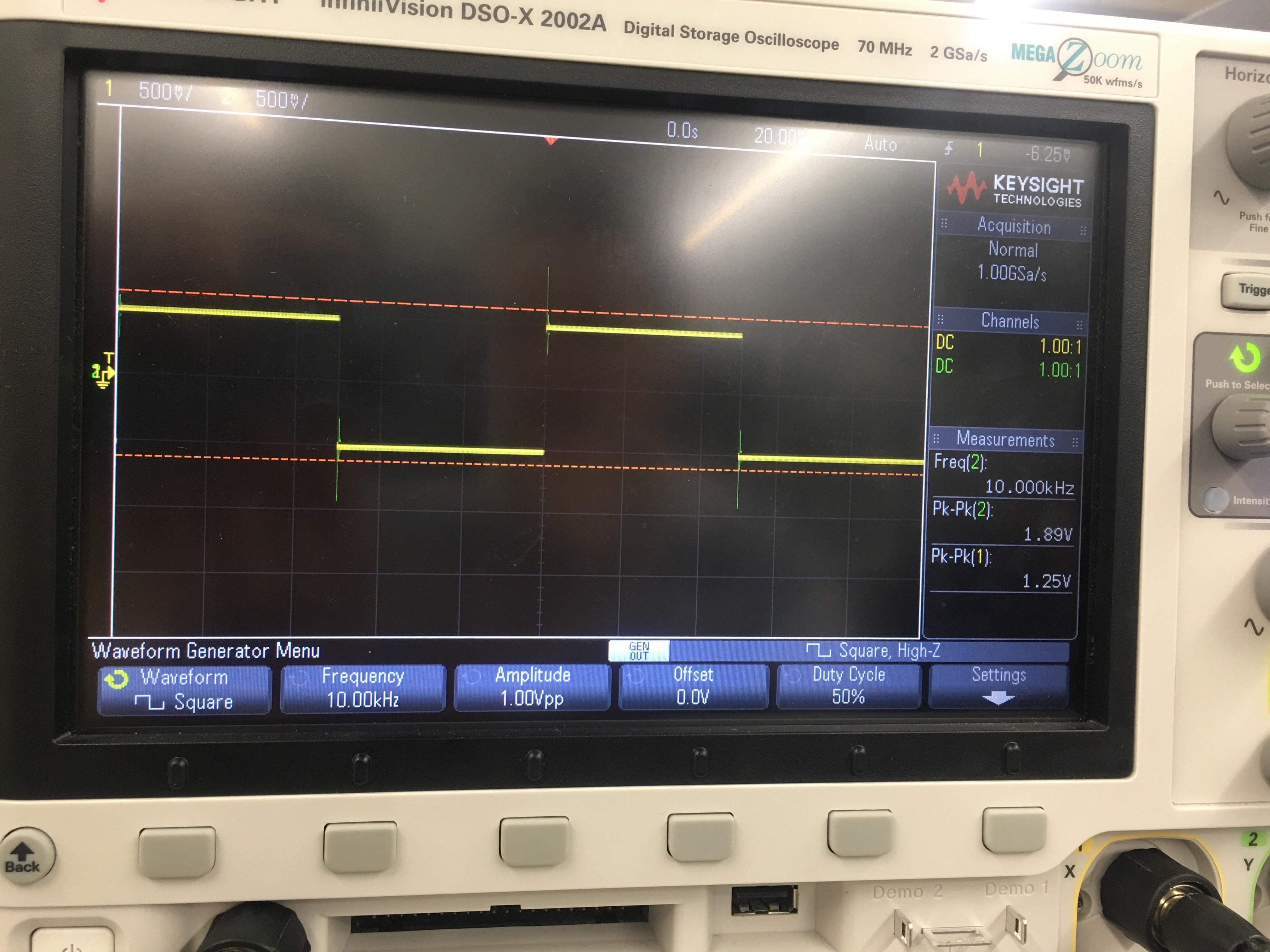 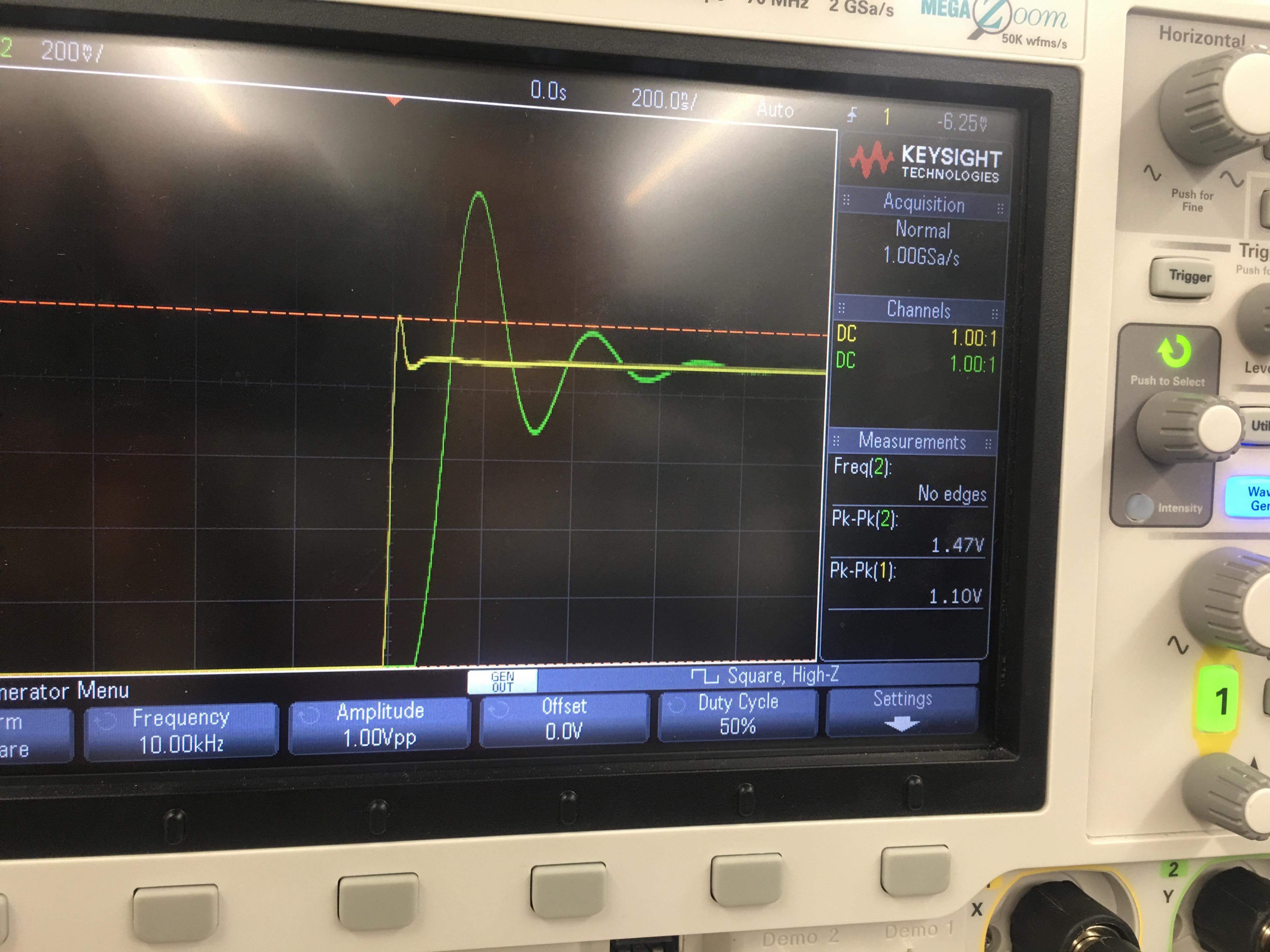 Hypothetically, the op amp acts as a low-pass filter due to its finite bandwidth, so it's not surprising that it produces similar results to the actual low-pass filter above.

My question is: based on electrical theory, low-pass filtering should produce a square wave with attenuated higher harmonics, which should produce something similar to the Gibbs phenomenon with overshoot at each of the corners. Why doesn't this happen here? For me, it makes MATHEMATICAL sense that the output wave should have overshoot at each corner, but it makes INTUITIVE sense that the output should only have overshoot at the corners that occur after a transition. Why? Because if the 'ringing' (overshoot/undershoot) also occurred BEFORE a transition, it would seem non-causal - it would almost be as if the wave is guessing that it's about to transition!

How can I reconcile my understanding from the perspective of Fourier theory with what actually happens in real life?

I figured it out! I created a MATLAB script which sums the first 1000 terms of the output's Fourier series with a 1Hz square wave input. Here's the answer:

Low-pass filters can cause the Gibbs phenomenon to occur, but these filters are not physically realizable. (This makes sense, otherwise non-causal behavior would be possible). Consider a brick wall filter. This is equivalent to truncating the Fourier series of the input to a certain maximum frequency. The results of the MATLAB script verify this: 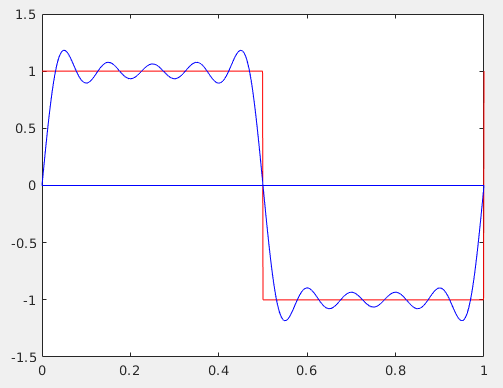 As mkeith said in the comments, a perfect first order RC filter does not produce ringing. Instead, the filter just 'rounds off' the square wave: 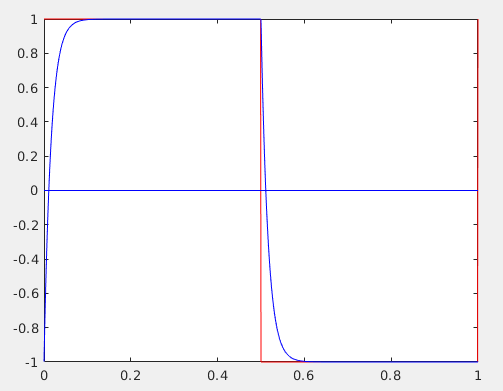 The filter that I created was a first order filter, but parasitic elements, bad probes, etc. must have produced the ringing/overshoot, since as the result from MATLAB above shows - first order low-pass filters do not produce ringing. 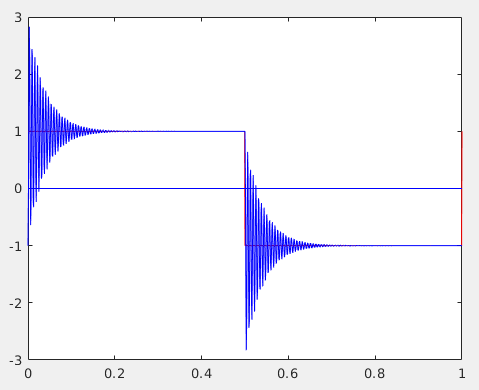 You'll notice that there is no non-causal behavior occurring here. This second-order filter is physically realizable (neglecting parasitic elements, but even then this behavior should be able to be approximately reproduced).

This means that the reason I was confused was simply because I didn't do the maths! I assumed that the Gibbs phenomenon would apply to a first order filter despite the fact that phase-shifting and attenuation occur in a first order filter which do not occur when truncating the Fourier series. 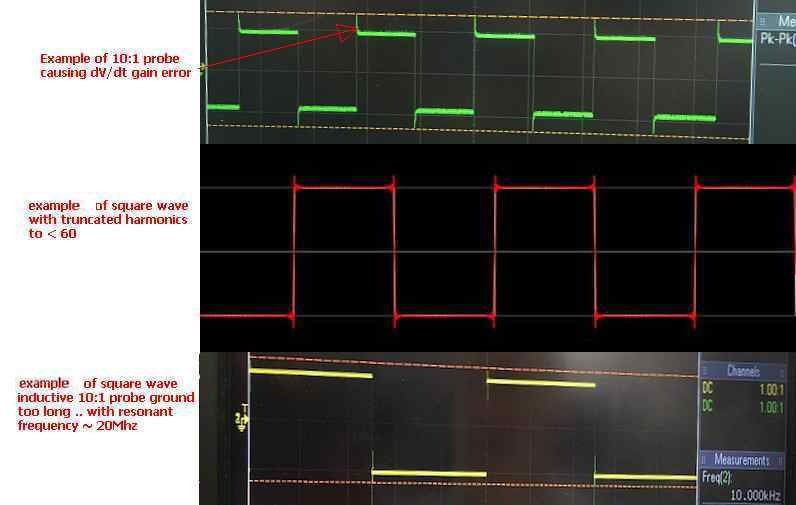 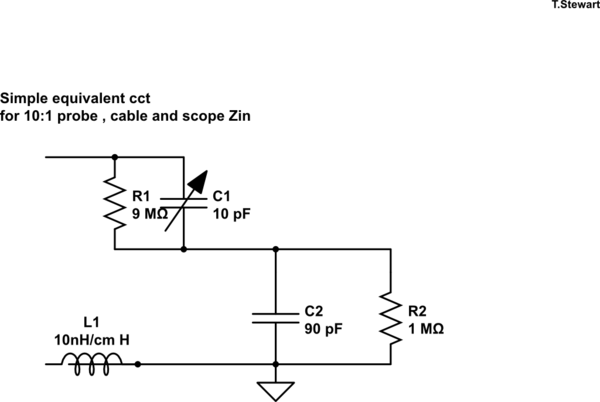 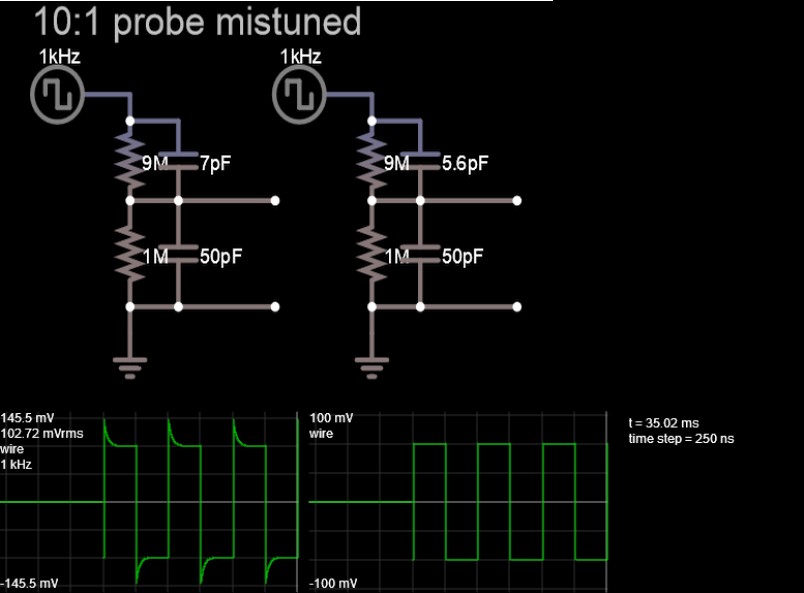 The 2nd signal above in red is a screen copy of Falstad's Fourier analysis of a square wave. With a slider option for truncated harmonics, the resulting signal is shown in red a ringing before the transition. This an example of non-causal. However, a real brick wall filter has a large phase shift and group delay which causes the amplitude changes to occur only AFTER the input change.

This makes a real filter, a causal system as opposed to truncating a Fourier series. 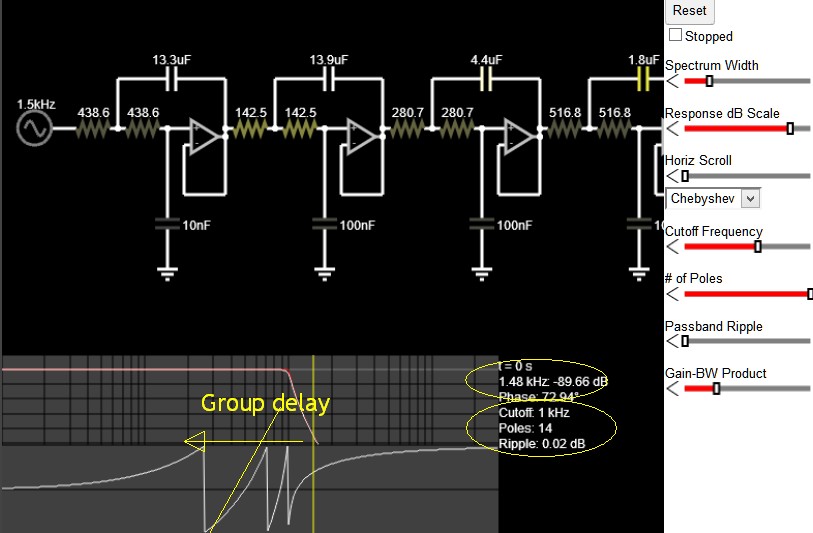 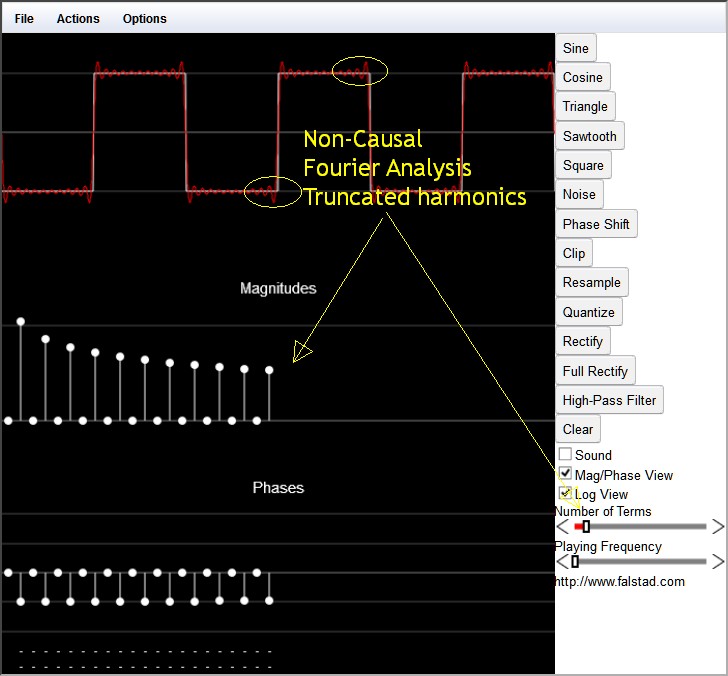 Not the answer you're looking for? Browse other questions tagged filter low-pass fourier bandwidth square or ask your own question.

4
What is the meaning of my fourier transform results?
1
What is the best way to get a sine wave from a square wave?
2
Why a low-pass filter applied to a square wave gives a weird wave?
2
Can someone give a detailed explanation of what happens when a square wave passes through a high pass filter?
3
Coefficients and harmonics of a PWM signal
3
Filtering a Square Wave into a Sine Wave
2
Low pass filter giving sine wave ( triangular wave as input )