Below is a circuit I'm working on. It's a guitar input buffer featuring transformer isolation. The transformer I'm using is pretty expensive and should be fairly linear, but I decided to add a graphic equaliser to the circuit to correct any small non-linearities in the transformer.

In an ideal world there would be no 'volume' control, only 5 eq faders. But that would probably involve some form of compression, which I don't want. So instead I decided to add an overvoltage indicator which will flash when the output goes above 1V. The user can tweek the eq, and then attenuate the output to keep the volume under 1V using the indicator for guidance. Does that sound wise? Is it necessary?

I probably don't need the input cap and pop resistor on the eq input. But is it safe to remove the cap? Can I put the output of the transformer directly into the opamp?

The warning indicator opamp comparator output is normally at -9v but the output is grounded, meaning under normal conditions there's 9V across that LED arrangement. Is that ok?

Thank you in advance good people.

EDIT : I'm aware that both sides of the circuit share the same power supply. That's just for ease of simulation In fact, placing the EQ before the transformer gives exactly the same simulation response, and requires only one power source. 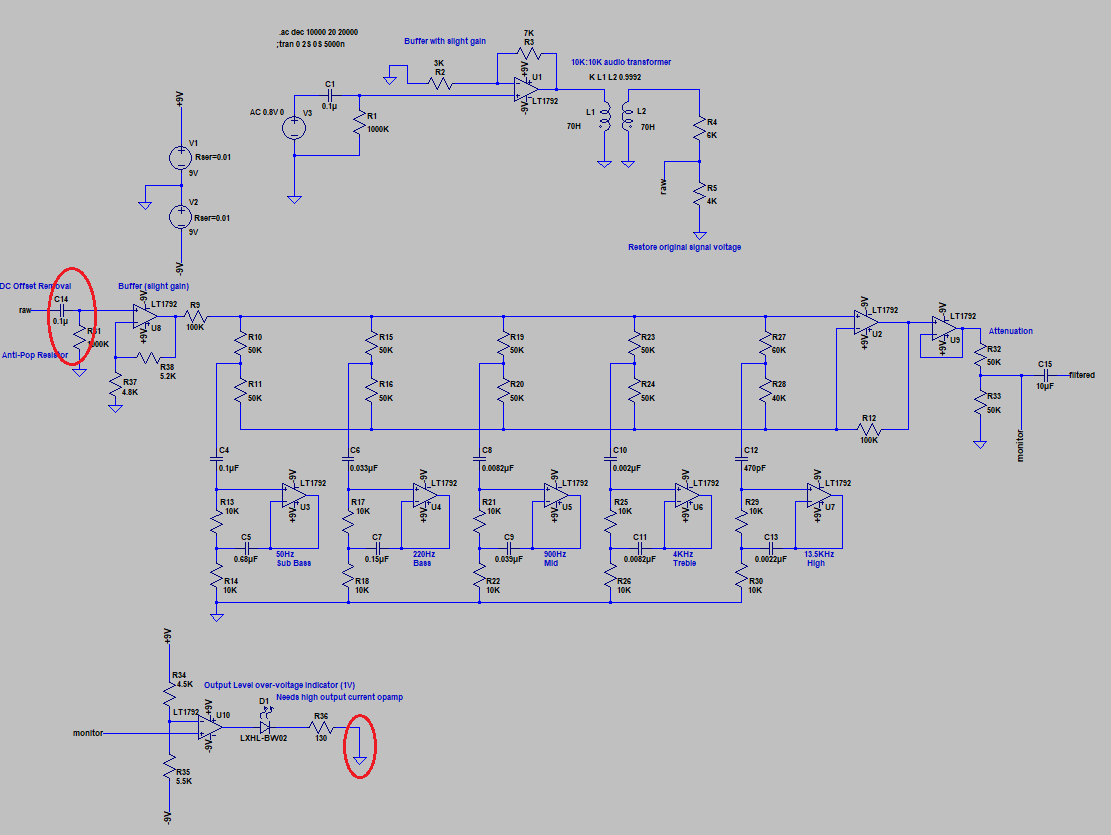 You don't really need the oversignal indicator as when the circuit hits it's limits you'd need to be stone deaf not to hear that as the opamps will clip. For a much better oversignal detector, build a peak-detector circuit. Like it is now the LED will hardly light up visibly for nasty overload peaks.

Indeed LED's don't like reverse voltages, even 9V could be a problem. Either connect the kathode side of the LED to -9V ) assuming the opamp can drive it's output down to about -7 V or lower) or add a diode in series with the LED so that the diode will handle the 9V reverse voltage and not the LED.

Not the answer you're looking for? Browse other questions tagged operational-amplifier audio transformer active-filter guitar-pedal or ask your own question.