importance of voltage Gain of an audio Op amp

I have been looking into audio amplifiers theory. So I understand that in the output you need a current gain in able to drive low impedance loads. But I am having difficulty in understanding why it is important to have a high voltage gain at low frequency for the IPS(input pair stage) and VAS (voltage amplifier stage).

Why is a high open loop gain so important for low distortion ?

What would happen if the open loop gain is lowered significantly ? by for example excessive emitter degeneration

Does anyone have an intuitive explanation?

Anyone who claims that only the open loop gain matters for distortion doesn't understand how distortion in circuits with feedback works.

Let's say that you have an opamp with a open-loop gain (so at DC and very low frequencies) of 1000.

You want to use it to make an amplifier which amplifies an input signal 10 times.

To do this you would be using the opamp in a feedback configuration, don't worry about how the schematic would look like, that's not relevant yet.

This is also called the "excess loopgain" as it is gain that is "too much", you need only 10 gain and you "waste" 100. But that does not mean that this excess loopgain is useless! In fact it is what decreases distortions created inside the loop.

So in conclusion: it is not only the loopgain that matters but also how much distortion the opamp adds. So a 10 higher \$A_{ol}\$ is pointless if the opamp also has a 10x higher distortion!

Both excess loopgain and intrinsic linearity of the opamp matter.

Disclaimer: I am aware that above numbers aren't 100% accurate, as commented below the actual excess loopgain is really 99 instead of 100. I prefer to explain with rounded off numbers to show the principle, not the exact values.

It sounds like you are talking about open-loop gain. Semiconductors (and tubes/valves) are inherently non-linear devices. Non-linearity produces distortion.

Feed a pure sine wave into an amplifier with distortion and you will get harmonics that obviously were not there in the input signal.

One way to linearize an amplifier is to employ feedback. You compare the output of the amplifier (possibly scaled) to your input. 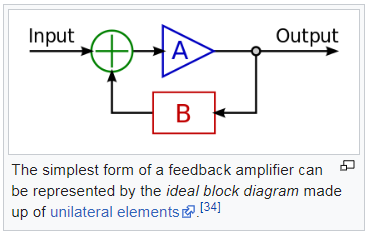 So the more gain you have the tighter the tracking between the input and output, and non-linearities in the internal circuitry don't matter as much.

Emitter degeneration is actually a form of feedback, so that will linearize one particular gain stage, but if it's part of a larger amplifier with feedback it will reduce the open-loop gain and result in lower gain with more error and distortion over the frequency range where the degeneration is active.