Li-ion battery cell balancing statistically unnecessary when many cells are in parallel?

Lithium ion batteries packs need to be balanced because of a small random voltage difference for each section in series, that may cause the voltage levels in a pack to diverge over time, right? So if you had a large number of cells (<40) in each series section wouldn't it be unnecessary to have balancing circuitry as the voltage difference of each series section would be extremely small due to the large sample? 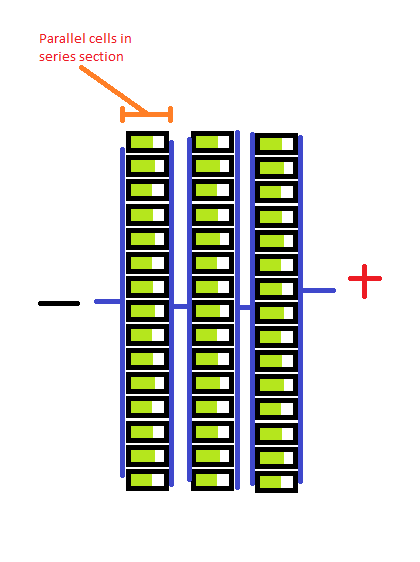 When several lithium cells are connected in series, it is the variation between series sections that requires balancing to be used. The problem with leakage and charge efficiency is that differences in these have a cummulative effect, and battery imbalance grows with each charge/discharge cycle.

I understand that you think that making each series section out of many cells in parallel would tend to even out the variation between those series sections.

However, 'tend to even out', and 'reduce to such a low level that it's not an issue during the expected lifetime of the pack' are very different things.

In the worst case, each series section will be as unbalanced as each individual cell. So there may be no improvement.

In the 'typical' case, you could statistically expect sqrt(number_of_cells) less variation in the parallel ensemble than for individual cells. For 40 cells, that's about 1/6th. So if you relied on this improved balance, you could typically cycle your cells 6 times more often before they became as unbalanced as a single series string. Doesn't really sound good enough improvement to me.

In the matched case, where you measure all the cells for capacity, internal leakage, charge and discharge efficiency, over temperature don't forget, and select the cells so each series section matches on all parameters, unfortunately those parameters change with age. Maybe you'll get 10 or 20 cycles out of the pack before differential parameter drift causes them to become unbalanced.

If you have series lithium cells, actively balance the charge between them.

Some people wonder why we need to balance lithiums, when we never needed to balance lead or nickel chemistries. The answer is that lead and nickel can be overcharged safely (as long as certain limits are observed) which naturally balances them. Unfortunately, there are no conditions that will allow the safe overcharging of lithium chemistries, overcharge rapidly destroys the cell.

Your title mentions cells in parallel yet the text talks about cells in series, that's confusing. I just answer both cases:

In case you mean cells in parallel:

No, cell balancing does not work like that. What matters is the difference in voltage between individual cells.

Using a large number of cells does not guarantee that the cell with the lowest voltage will have a higher voltage, closer to the average. So when that cell is connected it will still be charged (with a large, possibly damaging current) by the other cells.

Any time two (or more) cells are about to be connected in parallel their voltage must be similar to prevent large current to flow. This is done by balancing. This applies to any number of cells.

In case you mean cells in series:

No, cell balancing does not work like that. What matters is the difference in capacitance of the individual cells.

When one cell is almost empty but the other cells are not then you cannot keep using the battery pack as that empty cell will then be reverse charged and it will be damaged forever. So discharging has to stop.

The same is true for charging, when one of the cells in the series is nearly full the charging current through it has to be lowered to not overcharge it.

Using a large number of cells does not guarantee that the cell with the lowest capacity will not be over charged/discharged.

Any time two (or more) cells are about to be connected in series the voltages of all cells need to be monitored to prevent over charging/discharging.

Not the answer you're looking for? Browse other questions tagged lithium-ion charging balancing or ask your own question.

3
How will unmatched lithium-ion cells in parallel react?
2
How are cell failures handled in large lithium battery packs?
0
What are the tradeoffs when building a modular battery pack
2
Clear cut thing to do when 18650 Li Ion Cell Has Been Overdischarged
0
If you have a BMS, will current be limited at some points to a DC motor and affect performance?
1
9V (6F22) Lithium battery recharging
0
Charging lithium-ion cells in series individually with multiple CC regulators from a single power supply
1
Would this design for Li-Ion cell protection+balancing circuit work?
0
Why Would All Li-Ion Cells in a Battery Pack Go Dead at the Same Time?