How to amplify RF signal to high enough level for a CMOS downconverting mixer?

I've been reading original academic papers on mixers and now a RF textbook and I have been unable to understand a very basic thing, which is how do I get a RF signal, say -65 dBm, at a high enough voltage level for input into a CMOS-based downconverting mixer? Everything I read shows a LNA blackbox, which is fine and good, but LNAs amplify signals at what, 15-20 dB typically? How on earth is that even remotely close to activating a CMOS NPN transistor in the mixer with a typical threshold voltage of 700mV? +15dB gain on -65 dBm doesn't get it to 700mV+. And chaining multiple LNAs to get it to 700mV+ would destroy the signal with noise, no?

I know I'm missing something extremely obvious here so be kind. I'm just starting out. I know there's a lot more to downconversion (filtering, etc). This question is solely about the initial amplification.

Here's a schematic of a typical CMOS mixer circuit:

It's the classical "Gilbert" mixer.

Although not clear from this picture, the bottom NMOS is just for biasing, you can view it as a DC current source. That makes the bottom half of this circuit identical to a standard differential pair.

That current (containing the RF signal) is then fed into the upper "business" part of the mixer, the actual switching happens here. For that those 4 NMOS in a row need to be switching on/off properly. Therefore the LO signal needs to be large enough. Do we need 700 mV (as you claim), in the order of Vt for that?

No we don't! As long as the switching transistors switch "enough" then we will get an IF output signal. If the switching NMOS have a large enough W/L then even a 200 mV LO signal could be all we need.

What matters is the difference in Vgs for each pair of NMOS. As long as one NMOS has a larger Vgs than the other NMOS and the difference is such that the current from the RF part below chooses one NMOS over the other, then the mixer will "mix".

This is the same principle as applying a bias to a transistor in an amplifier circuit, by applying a bias we overcome the Vt (700 mV) "dead zone" of the NMOS so it is not an issue.

The mixer is driven by a Local Oscillator. The level is (say +7dBm).

The RF being switched is -65dBm. It doesn't do anything - just goes through the mixer switches. In the basic and best type, a mixer is switches.

Think relays. The local oscillator energises the coil and must be 12V. The RF goes through the contacts and can be any tiny level at all.

You can make a mixer using a DPDT relay, it wll be a double balanced mixer. It works very nicely with excellent IP3 and low loss. Poor frequency performance but.

Here is approximately what is inside the NE602 bipolar mixer. Note the use of bipolars to establish the biasing, to achieve headroom 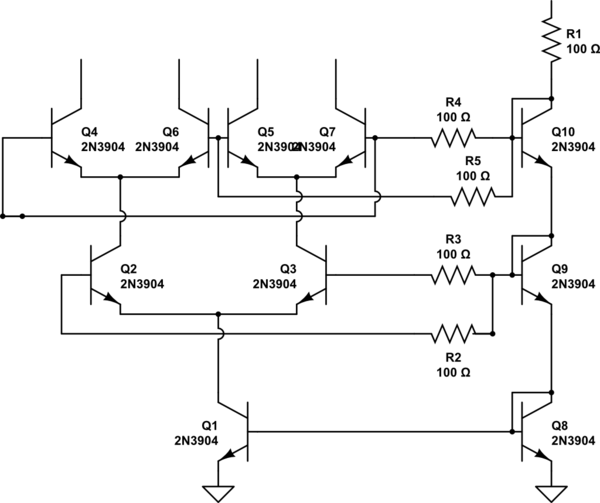 I'm going to accept Bimpelrekkie's answer because the suggestion (in the comment section) was that I read up on "differential pair circuits" and this is what got me going in the right direction. In retrospect, this question was really about how a NMOS amplifier works with weak signals and had nothing to do with a mixer. By adding "mixer" to my question I think complicated the question more than necessary.

In my quest to read up on differential circuits I came across a differential amplifier example provided in Practical Electronics for Inventors by Paul Scherz and Simon Monk, 3rd ed, p.446.

Scherz/Monk didn't provide all the parameters in their example: the signal parameters and NMOS parameters are not given. However, I drew up the Scherz/Monk example in LTSpice and used 100k resistors as Scherz/Monk did. I don't think these resistor values are exactly right for the NMOS transistor and signal levels I used in the simulation, but nevertheless it still shows amplification. Scherz/Monk go into how to determine the R values, but I didn't quite follow. (I think the bottom line is the transistors are supposed to operate near their "Q point.") 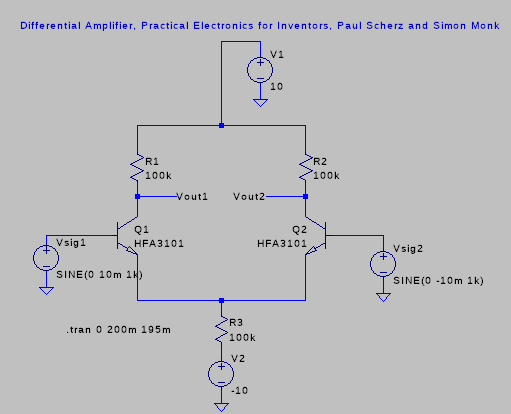 Waveforms of the two differential signals, V(vout1) and V(vout2) in LTSpice:

Not the answer you're looking for? Browse other questions tagged rf cmos npn mixer low-noise-amplifier or ask your own question.

2
How to make a RF additive mixer for two inputs in same frequency band?
1
How to amplify a very small signal
1
24GHz Mixer - How to shift the frequency of a 24GHz(100MHz bandwidth) signal by +-4kHz
5
Level shifting in HV CMOS processes
3
How is “conversion loss” defined for an IQ mixer?
0
Amplify coil antenna signal
4
Multiple Options for Passive Audio Mixer